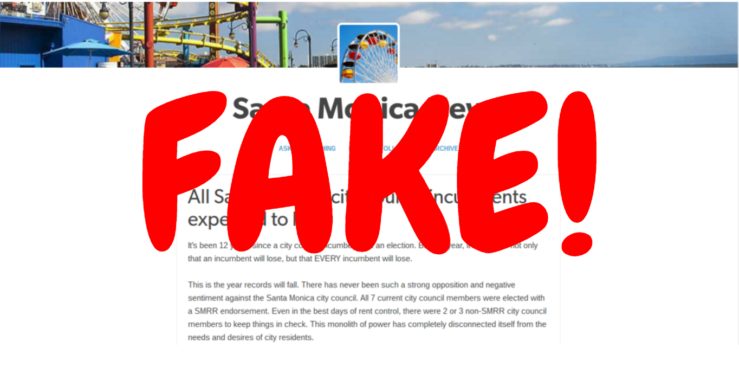 For a city its size, Santa Monica has a robust media ecosystem of locally-focused print and digital news publications. With a population just shy of 100,000, Santa Monica boasts several print papers and two exclusively online publications (this one included) that focus on local news.

But, mirroring the national trends, during this past election season, Santa Monica’s local news outlets found themselves sharing space on the Internet with fake news.

Perhaps the most egregious example was the site santamonicanews.org, which sprung up in October and unabashedly pushed an anti-development message, actively promoting Measure LV, the extreme no-growth initiative that would have required a public vote on nearly all projects taller than 32-to-36 feet.

The site itself, hosted by the microblogging site tumblr, doesn’t have bylines for any of its posts and it has no information about authors, publishers, or anyone who is affiliated with the site.

On November 2, a post on the site announced that all four of the incumbent City Council members were “expected to lose.” The article has since been deleted, but there are screenshots below.

Given the outcome of the election — all four incumbent candidates won handily and Measure LV was soundly defeated — it is not clear who expected the incumbents to lose, though it’s possible that the headline could have referred entirely to the author’s own opinion.

The site remains up but has not published since November 6. That post was a list of pending or approved residential projects on Lincoln Boulevard with the headline, “Lincoln Blvd is about to get even slower.”

Of course, the vast majority of traffic on Lincoln is commuter traffic, people who live south of Santa Monica who have to either commute to work here or pass through the city in order to get to work (roughly 33 percent of all car trips actually neither begin nor end in Santa Monica, meaning they are just passing through). New housing in Santa could, in fact, make it easier for people who currently commute into the city to live here, potentially taking cars off the road during rush hour. The post also makes the false claim that there are “over 100 other development projects totaling 4 million square feet currently under construction or seeking approval.”

Many of the projects that the author counted in that tally included minor things like a permit for a two-story garden learning center for children and a permit to convert an existing retail space into a Fresh & Easy grocery store, a project which appears to be stalled since the company declared bankruptcy for the second time last year.

It’s unclear how the author of the article determined the total square footage of all of the alleged projects.

The site also misrepresented several projects, including using a rendering for a pending hotel project on Ocean Avenue that was at least two years out of date, a tactic that was used often by people campaigning in favor of Measure LV.

During the election, santamonicanews.org got a boost from social media. A Facebook group called “Santa Monica Residents” shared the site’s posts often and, at times, even paid to promote the posts.

The group Santa Monica Residents claims its purpose is to keep “Santa Monica residents informed about the latest news and issues,” according to the page’s “About” section.

While it is the most egregious example of blurring the lines between fact and fiction, santamonicanews.org isn’t alone in pushing out often outright false information as “news.”

Santa Monica Observer plays fast and loose with the facts.

Under the “News” section of the Observer’s website is this headline: “Kanye West Appointed Under-Secretary of the Interior After Meeting at Trump Tower.”

It is unclear whether the article is meant to be satire since there is no indication that it is different from the other, actual headlines also listed under “News.”

The other peculiar thing about The Observer is that it’s unclear whether the authors are real people. The story “Cornell University Astronomers Claim to have Detected 234 Alien Civilizations” is by Sarah Storkin, according to the byline on the article. However, the photograph that accompanies her byline appears to have been pulled from the online resume of one Hannah Sorkin, a university student in Staffordshire, England.

Or, there is the article “City Extends Night Closures of 10 Freeway, Traffic Redirected to Olympic Thru 12/16” attributed simply to “Observer Staff.”

While such an article seems straightforward enough, it contains this line, “In it’s [sic] ongoing effort to spend money and create high paying jobs for City of Santa Monica employees, despite the inconvenience to residents; the westbound I-10 freeway will be temporarily closed for a signage replacement project starting Monday, December 5.”

It may not qualify explicitly as fake news, but the assertion that this is an effort to create jobs for city employees is dubious at best and doesn’t have much place in what is simply an announcement about the improvement of the signage on the freeway.

Santa Monica Next, and our companion sites throughout California, believe that a good journalist can bring his or her life experiences and knowledge into a story to help readers understand what is going on in the stories. Journalists that stop at “who, what, when, and where” and leave out the “why” are little more than stenographers.

Similarly, websites that are exclusively opinion driven aren’t necessarily bad either. City Watch (http://citywatchla.com) is a staple in the local media scene for our neighbors to the east, and the majority of its original content is op/eds written by community activists and neighborhood council members.

But websites that purport to be news that insert opinions into pieces and state them as fact or just make up their own facts do nothing besides confuse the public and, at worst, create conflict where none needs to exist.