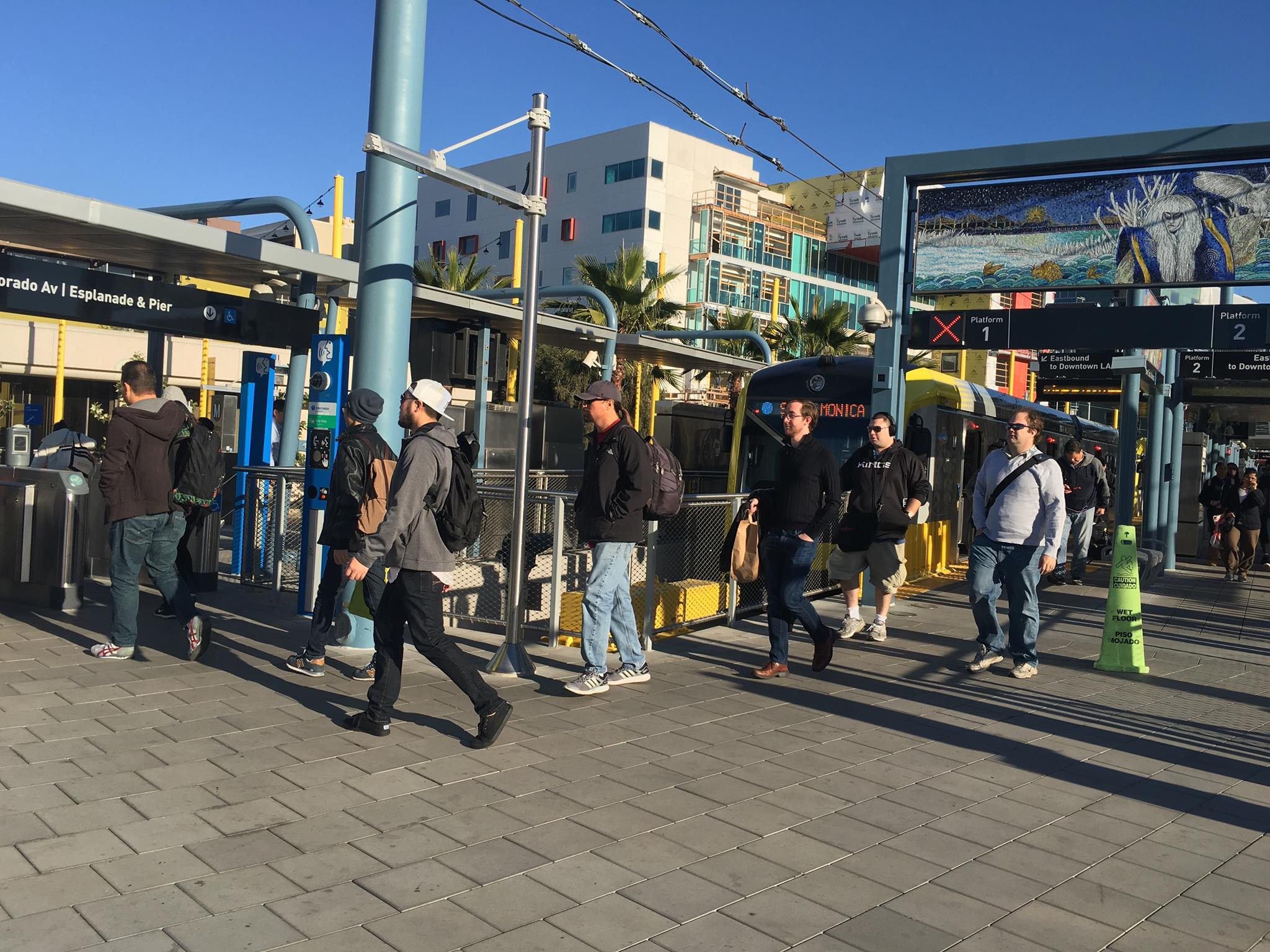 Two months ago, the City of Santa Monica launched Car Free Fridays, a monthly initiative aimed at getting people to try new ways of getting around. Today is the most recent Car Free Friday.

With the arrival of the Expo line, Santa Monica’s now year-old bike-share system, the city’s growing network of bike lanes and other bike infrastructure, and real-time transit information for the Big Blue Bus and Metro buses readily available on phones, computers, and other devices, ditching the car — even if it’s just once in awhile — is getting much easier.

We want to know if you are participating in Car Free Fridays. If so, how do you find the experience? If not, what are you major barriers?

“The city is creating enthusiasm by giving people a moment to celebrate and try new things. We are creating an energy and social awareness and giving people motivation to try something on a day that it is most convenient,” said Francie Stefan, Santa Monica’s mobility manager.

Stefan noted that coming up, the city is working on piloting a “new resident care package” designed to help newcomers familiarize themselves with Santa Monica’s rich array of transportation options. That’s in addition to the city’s Bike Action Plan, the Pedestrian Action Plan, the previously-mentioned bike-share system, and other measures designed to make it easier to get around without a car.

Over the years, Santa Monica has actually been pretty successful pushing the envelope with its environmentally-conscious policies.

Recently, the Planning Commission approved plans for an addition to City Hall that could potentially be one of the greenest buildings in the country. And, the city also recently adopted an ambitious energy policy for new buildings.

Still, a recent article on Vox.com points out the elephant in the room: Santa Monica’s environmental policies are being undermined by the city’s general aversion to even modest growth.

In the article Santa Monica Is Creating a Low-Carbon City Only Rich People Can Enjoy, author David Roberts points out:

The wealthy of Santa Monica, by living in a place with strong environmental laws and standards, will avail themselves of a low-carbon lifestyle. They will live in low-carbon houses, drive low-carbon cars, and patronize low-carbon local businesses. The per-capita carbon emissions of those lucky residents will be low compared to others in their socioeconomic cohort.

But as job growth continues, people will keep coming to the city. That’s part of what keeps a city vital — people keep coming. If those people can’t afford a place to live in the city, they will be pushed to the periphery and beyond, to sprawling suburbs.

They will still drive into the city to work (that’s why suppressing housing development only increases traffic). But they will live remotely, which means infrastructure will have to be built out to support them — roads, sewers, power lines. Delivery of all services will be more carbon intensive because people will be more spread out.

And those working class people on the periphery will likely be unable to afford ZNE houses or electric cars, so they will not enjoy the low-carbon lifestyle purchased by the wealthy of Santa Monica proper.

But climate change is just a numbers game. Personal virtue doesn’t count for much. The imperative is to build low-carbon systems, not individual low-carbon houses, and to get as many people as possible into those systems.

Events like Car Free Friday seek to address the environmental problems caused by having a large commuter population, but these events alone aren’t enough to create “systems change,” in Roberts’ words.

Roberts’ article was written shortly before the November 8 election, during which Santa Monicans were asked to vote on a ballot measure — Measure LV — that would have effectively prevented nearly all new housing growth in Santa Monica by requiring a city-wide vote on nearly all projects taller than 32 feet.

Measure LV, or the LUVE initiative, however, failed soundly. The most recent vote tally has LV failing by 11 percentage points.

The results clearly show that Santa Monicans don’t have an appetite for the sort of restrictive ballot-box planning that Measure LV represented. Still, the City Council Tuesday will consider whether there ought to be an alternative, less restrictive version of LV.

And as more and more people are priced out of living in Santa Monica, they will continue to drive into the city to work. Car Free Friday may help relieve some of the problems associated with these long commutes, but not at the scale needed to really make a meaningful impact.