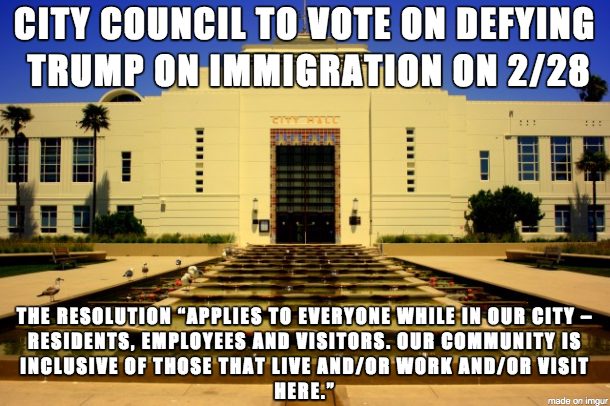 At tomorrow’s meeting, the Santa Monica City Council will consider adopting a resolution that makes clear the beachside city won’t cooperate with federal authorities on issues pertaining specifically to immigration.

The resolution, released Friday afternoon, comes shortly after a city-sponsored forum on immigrants’ rights at which Mayor Ted Winterer and SMPD Chief Jacqueline Seabrooks reaffirmed that local authorities will not participate in enforcing federal immigration law.

“At tomorrow night’s meeting, we will put forward a resolution rejecting hate and discrimination and clarifying the City’s role in enforcing federal immigration law,” Winterer said. “We look forward to even more opportunities where we can join residents in a conversation about the environment we’re living in and what we can do as Santa Monicans to protect our neighbors and our values.”

According to the resolution, neither the police department nor the city shall use “City monies, resources, or personnel to investigate, question, detect, apprehend, detain or register persons whose only violation is or may be a violation of the civil provisions of federal immigration law related to documented status.”

The resolution also affirms that the city will not use any if its resources “in support of any federal program requiring the unlawful or unconstitutional registration or detention of individuals on the basis of religious affiliation, race, national or ethnic origin, immigration status, gender, sexual identity or orientation or share any data that may have been collected or will be collected which contains this information.”

Also in the resolution is a prohibition against the city entering into any agreement that obligates it to violate any of the other elements of the resolution.

The four-page resolution is essentially a reaffirmation of Santa Monica’s long-standing policy of not using local resources to enforce federal immigration law.

Seabrooks has pointed out that this is necessary for local police to be able to do their jobs, a point which is reiterated in the preamble to the resolution.

“[T]he City’s ability to protect public safety and keep its inhabitants, visitors and tourists safe — regardless of national origin or immigration status — requires that persons not hesitate to call the police department, fire department or other City divisions either as a victim or witness to crime or accident…” the preamble reads.

The preamble to the resolution is as much a statement of values as it is a policy document, noting that the city has “long embraced and welcomed” people from diverse backgrounds and “recognizes that the strength of our community lies in our diversity.”

It’s a direct refutation of the policies of the administration, which Santa Monica native and adviser to President Donald Trump Stephen Miller, has had a hand in crafting.

Miller, who graduated from Santa Monica High School in 2003, has been identified as the architect of the administration’s more draconian policies, including the infamous “Muslim Ban” executive order.

The contrast between the Trump administration’s policies and the values stated in the resolution being considered by Miller’s hometown are stark.

“[T]he City has a long and proud history of promoting equitable policies that protect our residents, environment, communities and way of life that depends on tolerance and inclusiveness,” the preamble reads.

Still, shortly after the resolution was released Friday afternoon, some observers were concerned that any explicit reference to the tens of thousands of people who work, but do not live, in the city was missing from the resolution.

Many local businesses, including the dozens of hotels and hundreds of restaurants, employee immigrants who may be vulnerable under the Trump administration.

In an email to Santa Monica Next on Monday, city officials noted that the resolution “applies to everyone while in our city – residents, employees and visitors. Our community is inclusive of those that live and/or work and/or visit here.”