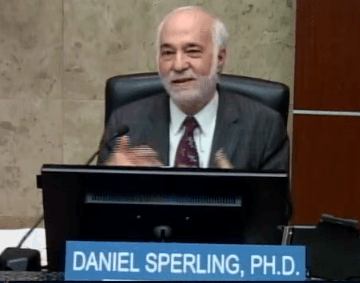 While most media coverage of last week’s California Air Resources meeting focused on the board’s decision to strengthen vehicle emission standards, an equally remarkable and important discussion happened late in the first afternoon of the two-day meeting.

That’s when the board took up the matter of setting greenhouse gas reduction targets, and board members  zeroed in on the disconnect between the state’s climate change goals and the way California funds transportation. A good chunk of the money to be raised in S.B. 1, the transportation funding bill currently making its way through the legislature, is slated for highway expansion. And that, said ARB board member John Balms, is “not the way to meet our climate change goals.”

UC Davis Professor Daniel Sperling, another member of the board, said that California needs to invest “in a way that rewards those cities and counties that are working to reduce [vehicle miles traveled],” he said.

“Right now our money mostly goes to those areas that [produce] more VMT. We’ve got to change that,” he said.

“We have an ongoing discussion in this state that needs to be resolved,” she added. “Whenever you add capacity to existing roads, it does create induced demand, and it fills up immediately.”

“I would argue that maybe the first place to look would be at the parts that relate to increasing capacity— and see if we could redirect those funds to things that would be more in line with our other goals.”

This is a remarkable statement from the head of a state agency. Recognizing the concept of induced demand is something that Caltrans only recently acknowledged, and few others in state governance seem willing to embrace the notion that building more road capacity does nothing to solve congestion. The concept of induced demand does not inform the funding package in S.B. 1, nor does it show up in Governor Brown’s infrastructure priorities—both of which emphasize new roads over improving and expanding transit.

The transportation funding bills “need to be aligned with statewide climate goals,” said board member John Balms. “They are on two separate paths now.”

The legislature, he said, “seems to think that climate change goals can be funded by the Greenhouse Gas Reduction Fund [which comes from cap-and-trade], but I don’t think there’s enough money there to provide the positive incentives that [we need]. Some of the money should come from S.B. 1,” he said.

As Streetsblog reported last week, the Air Resources Board is required to periodically update the greenhouse gas emissions targets it sets for regions. The process included collecting input on those targets from the Metropolitan Planning Organizations (MPOs), which are in charge of identifying strategies to meet those targets, and moved on to gathering comments at public workshops throughout the state.

But the process highlighted something no one seemed willing to say out loud: the state is at an impasse when it comes to concrete action to reduce greenhouse gas emissions, and there’s a lack of political will to actually make it happen. On one hand, you have ambitious targets, set by state legislators and the Air Resources Board; and on the other hand, you have mounting pressure to invest in “fixing roads” without clearly thinking through exactly what that means.

And on the third hand, you have MPOs pointing out all the reasons they can’t meet what targets have been set.

Cheap fuel and efficient cars are driving more driving, said the MPOs. Their current strategies for reducing vehicle miles traveled are not sufficient, and, they said, they would need a lot more money if they were to be able to go beyond those.

ARB staff had proposed greenhouse gas reduction targets based on scenario plans called “stress tests” that the MPOs had performed to see how much emission reduction they could squeeze out of their regions. Those targets would not be anywhere near enough to reach state goals, but nevertheless the MPOs yelped.

The tests, said a representative of Sacramento Area Council of Governments, were based on ambitious, unconstrained, and above all implausible scenarios. The Metropolitan Planning Commission, the San Francisco Bay Area’s MPO, said the proposed targets would require measures “well beyond what we can achieve” under current regulations. “We need a lot more money for transit. We would need resources to address affordable housing and displacement,” said MTC’s representative.

Hassan Ikhrata, executive director of SCAG, urged the board: “Let us not go backward.” But by “backward” he didn’t mean lowering emission reduction targets until they were useless; he meant pressuring regions to meet “unrealistic” targets with a “fantasy plan” that had no basis in reality.

Professor Sperling had a few suggestions for helping the state move forward, not backward, on climate change goals. In addition to money, innovations are needed, and Californians needed to have greatly expanded, reasonable choices, or they are not going to give up driving.

Sperling also called for the convening of a roundtable “modeled on the work we did with the Environmental Justice Advisory Committee,” to include ARB board members, the California Transportation Commission, Caltrans, MPO representatives, and others. He suggested starting with figuring out how to redirect money to those cities and counties that are committed to reducing vehicle miles traveled. “That’s a first step that would help move us forward,” he said. “How do we make [greenhouse gas reduction target] plans and efforts conform with transportation funding and local general plans?”

The roundtable idea was endorsed by several other boardmembers, and they cited additional topics that should be discussed, such as equity and consistent methods for measuring and reporting GHG emissions.

Assemblymember Eduardo Garcia (D-Coachella), who recently joined the board as its first legislative member, assured the board and listeners that the conversation they are calling for about aligning transportation funding with climate change goals “is occurring.”

But, he warned, “That’s not received very well. It’s a radical idea.” Many legislators want to talk about fixing roads and bridges, but don’t want to invest in climate change. “There are legislators that do believe that this should all come from GGRF funds–the same legislators that don’t support climate change policies.” He paused, then added that those same lawmakers then “actually have their hand out, saying, hey, how come our communities aren’t getting any?”

“So there’s kind of a dichotomy there that is somewhat challenging to understand,” he added diplomatically.

“A.B. 1 and S.B. 1 do have some hikes in the gas and diesel tax,” he reminded everyone, and “that may help us somewhat on VMT. But we have work to do. . . It will require us to do a lot of education of some of my colleagues.”