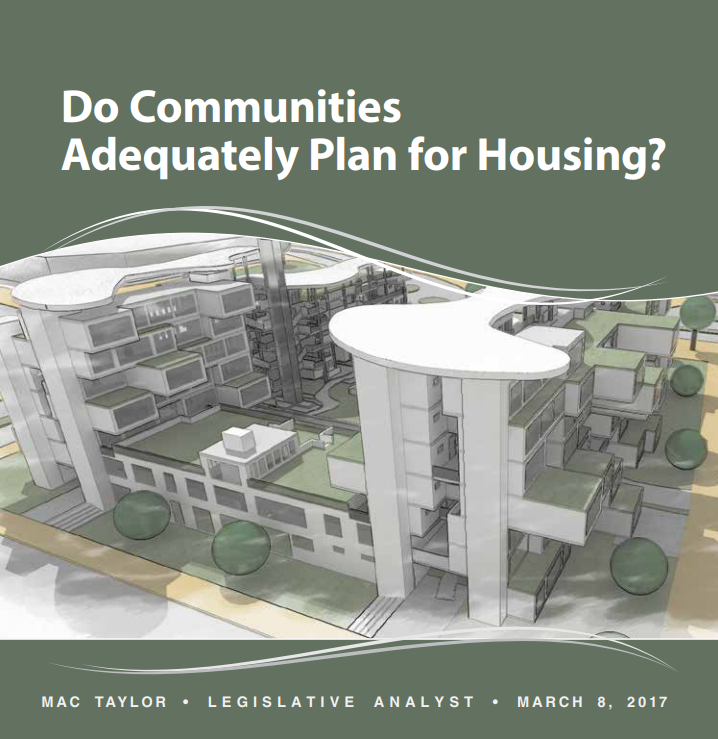 The report, the most recent in a series from the nonpartisan organization analyzing the causes and consequences of California’s housing shortage, is bad news for those hoping Sacramento would be able to rescue the state from the aggregate effects of decades of local anti-development policies.

“Although we offer a few changes the Legislature could consider, real improvement can come only with a major shift in how communities and their residents think about and value new housing,” the report’s executive summary reads.

The few changes offered in the report are, the authors admit, merely meant to chip away at the edge of California’s dire housing shortage, which is increasingly driving out the state’s lower- and middle-income households and growing the gap between rich and poor within our cities.

The failure of California cities to embrace urban living and denser land use patterns is also a major obstacle to the state’s ambitious strategies to combat climate change. That dissonance is perhaps most aggressively on display in Los Angeles County, which is spending billions on building out a robust high-capacity transit network, but where significant changes to the land use around that network are piecemeal and often fought tooth-and-nail.

“There is little indication, however, that such a shift [in attitudes around housing] is forthcoming,” the report concludes.

“Convincing Californians that a large increase in home building—one that often would change the character of communities—could substantially better the lives of future residents and future generations necessitates difficult conversations led by elected officials and other community leaders interested in those goals,” the report reads. “Unless Californians are convinced of the benefits of more home building—targeted at meeting housing demand at every income level—the ability of the state to alter local planning decisions is limited.”

Following the March election in Los Angeles that concluded with voters soundly rejecting the draconian anti-development Measure S, some are optimistic that the tide may be shifting. In a post-mortem of the election published Thursday, L.A. Weekly’s Hillel Aron quoted William Fulton, the former mayor of Ventura and author of one of the defining books about Southern California urban planning politics, The Reluctant Metropolis. Fulton said, “Up until the 1980s and into the 1990s, Los Angeles was a very large city whose residents didn’t identify with living in a metropolis. They believed in their small communities… I think that’s changed. Los Angeles is no longer a reluctant metropolis.”

Curbed LA’s Alissa Walker also saw the outcome of the March 7 election as indicating a shift in the political culture of California’s largest city.

Still, it’s clear that real change in the political culture around the growth question is going to be a slog. The March 7 election saw historically low turnout, with only about eleven percent of registered voters voting. That makes it hard to draw any definitive conclusions about what Los Angeles residents want, while still making it clear that the outrage that Measure S proponents claimed was present in the electorate simply isn’t there.

While the defeat of Measure S — and of the similarly draconian Measure LV in Santa Monica this past November — prevented the status quo from becoming even worse, these defeats have done nothing to improve the status quo.

Additionally, proponents of Measure S are already promising they will return with another anti-development measure. And in Santa Monica, at least one City Council member is promising to take steps to further control growth in the already slow-growth city.

The bleak outlook presented in the LAO report comes after a failed attempt by Governor Jerry Brown to include language in his budget that would have streamlined approval of housing projects that included a certain amount of affordable housing. His proposal was one of the more aggressive attempts by Sacramento to wrest land use control from local jurisdictions, and it died unceremoniously in the face of opposition by labor, environmental groups, and, of course, local governments.

Brown’s budget proposal this year essentially laid responsibility at the feet of local jurisdictions, noting that there would be no money from the state’s general fund for affordable housing and new funding would be tied to significant reform of the housing approval process to reduce the cost of construction.

Still, state lawmakers are attempting to chip away at the growing housing crisis.

Last week, a handful of State Assemblymembers convened in San Francisco to discuss their legislative efforts to address the problem, including one bill that would end the 1995 Costa-Hawkins Rental Housing Act, which put statewide limits on the reaches of local rent control laws.

The most substantive suggestion the LAO report offers is that state legislators could reform how Sacramento determines each individual city and county’s fair share of housing growth, known as Regional Housing Needs Allocation (RHNA).

The current process is flawed, the report states, and often underestimates just how many new homes are needed in each jurisdiction. Tying RHNA numbers to clear indicators of housing shortages — like above-average rents or below-average vacancy rates — might help, the report says.

In cities like Los Angeles and Santa Monica, the rental vacancy rate hovers around two to three percent. The vacancy rate in a healthy rental market — at least from the renter’s perspective, since lower vacancy rates favor property owners — should be about a five percent.

But even if the state can improve the way RHNA requirements are calculated, there is little it can do to force jurisdictions to accept them. Currently there are few, if any, real consequences for cities that don’t build enough housing, and the LAO report points out that there are real limitations to what the state can offer to incentivize housing growth.

Ultimately, it falls to local activists to capture the hearts and minds of their neighbors and the attention of their elected officials if California is going to remain accessible and sustainable. In the meantime, the state’s most vulnerable residents and anyone who would benefit from having access to quality jobs will continue to take it on the chin while we weigh their future against issues like “neighborhood character.”