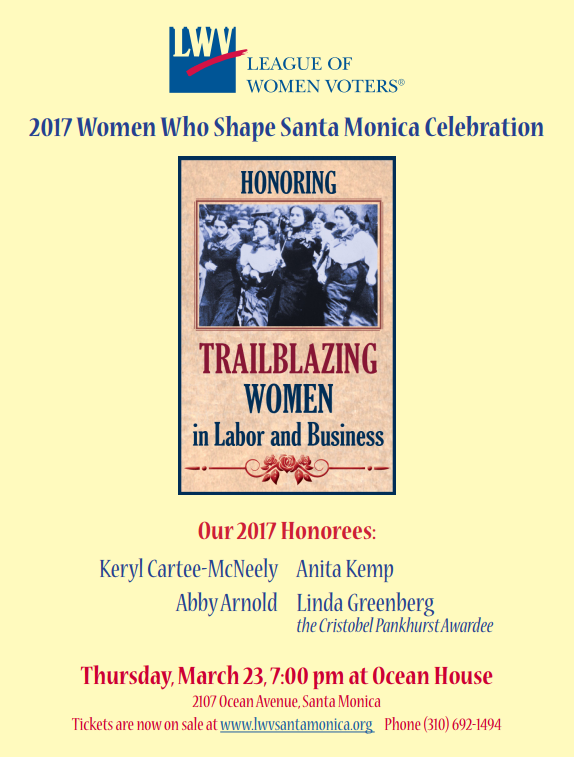 The League of Women Voters of Santa Monica will honor four women Thursday night for their significant roles in shaping the beachside city.

This is the 10th year the League of Women Voters of Santa Monica (LWVSM) have held the awards and this year’s theme is “Trailblazing Women in Labor and Business,” according to LWVSM President Barbara Inatsugu.

Inatsugu wrote in an email to Santa Monica Next, “The League of Women Voters of Santa Monica celebrates Women’s History Month by honoring women who have, in some way, shaped the face and life of our city. This is an event we began 10 years ago to honor these amazing women.”

Abby Arnold, Santa Monica Next steering committee member and long-time community activist, will be among those honored at the League of Women Voters of Santa Monica’s annual “Women Who Shaped Santa Monica” gala Thursday.

Arnold will receive the “Yellow Rose” award Thursday night alongside two other women: Anita Kemp, a teacher at Santa Monica High School who has worked with students in Career and Technical Education (formerly the Regional Occupational Program or ROP) for more than three decades, and Keryl Cartee-McNeely, a labor leader in the Santa Monica-Malibu Unified School District who is the secretary on the Executive Board of SEIU Local 99.

The “Yellow Rose” award is named for a symbol in the early 20th century for those supportive of amending the constitution to allow women to vote.

Linda Greenberg, the director of the nonprofit Santa Monica-Malibu Education Foundation, will be given the Christabel Pankhurst award, which is given to “a long-time League [of Women Voters] member who has significantly contributed to shaping the community,” according to the LWVSM.

The award is named for the suffragette and daughter of Emmeline Pankhurst. Christabel is buried in Woodlawn Cemetery.

Arnold, a feminist activist with roots in the women’s movement and the labor movement, has also been a long-time member of the Unitarian Universalist Community Church of Santa Monica, a leader in Clergy and Laity United for Economic Justice (CLUE), and she serves on the board of the California Physicians Alliance. As a professional consultant to nonprofit organizations and local governments has helped raise over $100 million for social services, community empowerment, and housing.

“It is such an honor to be recognized by the League of Women Voters for my social justice work. At the heart of my life, I am dedicated to full equality for women,” Arnold wrote in an email to Santa Monica Next.

“My grandmother worked for women’s suffrage over 100 years ago in Racine, Wisconsin, and my generation, along with her great-grandchildren, continues that struggle to this day. The labor movement is a crucial leader in achieving economic rights for women in the workplace, and advancing women in its own leadership,” she wrote. “Through support on both local and global levels, we are making slow progress toward equality.”

According to the League’s website, Thursday’s event is at capacity and as such, no tickets will be available at the door. However, people wishing to send a note an honoree can do so by sending an email to a message to an honoree, please send us a note to league@lwvsantamonica.org and the organizers will make sure the messages are delivered at the event, according to the League’s website.