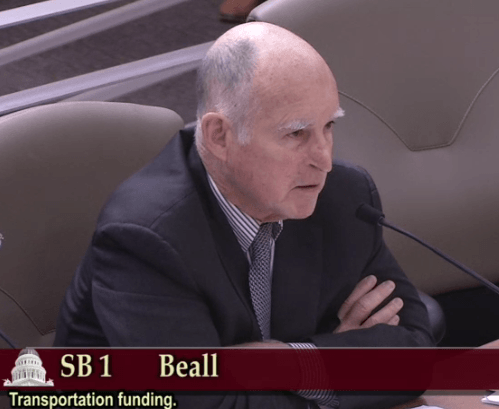 Governor Jerry Brown and California legislative leaders are hoping that the transportation funding package they have agreed on will get quick approval in the legislature, and to that end have been stumping for it hither and yon.

They went to Concord last week; today they’re in Riverside. And yesterday they attended not one but two legislative hearings: one as previously scheduled in the Senate Appropriations Committee, and an informational hearing in the Assembly Transportation Committee.

The Senate committee accepted an amendment and voted S.B. 1 onward to the Senate floor, where supporters hope to get a vote on it on Thursday. The amendment was in response to objections raised about a provision added late last Thursday that would have exempted trucks from oversight by the Air Resources Board. That had created a huge stir, and many environmental groups told both committees that they had been ready to support the bill, which otherwise has much going for it, but could not because of that one paragraph. Yesterday’s “fix” simply removed references in the amendment to “indirect source” rules, and the environmental groups were not buying it.

Senator Ricardo Lara (D-Bell Gardens), the head of the Senate Appropriations Committee, asked several times whether the new amendment was satisfactory. The response from the Air Resources Board, in the person of its executive officer Richard Corey, was: “Our understanding is that striking that language retains the flexibility” needed by local air districts to reduce emissions at ports and commercial hubs.

Senator Lara kept pressing. “I want to make sure we don’t sacrifice human health to be able to make sure this package passes,” he said. Before the committee voted, he called Adrian Martinez, a lawyer for Earth Justice, back to the microphone to explain again why all the environmental groups still objected, despite the new amendment.

“We have two main concerns,” said Martinez. “If there’s a desire to make sure indirect source rules, fleet rules, and other programs . . .  can move forward, then that should just be put into the [bill] language itself. There’s a whole section on exceptions . . . [which] can create ambiguity, as we’ve seen from years of litigating in the courts.”

Also, he said, the provision “covers a lot of trucks; it’s very broad . . . If there’s an intent to cover a certain type of trucks, then that should be [made] clear.”

“We don’t want to be an impediment,” he added, but “this is just too big not to push back vehemently about.”

Bill Magavern of the Clean Air Coalition, in his testimony, had told the committee that the new language “precludes ARB from ordering a retrofit of any truck for eighteen years or 80,000 miles.” Also, he said if the intent of the amendment really is to say that local air districts and the ARB are not to be prevented from creating rules on indirect sources, that should be language put directly into the law, rather than left implied as the “intent of the bill.”

Senator Lara asked the bill’s author, Senator Jim Beall (D-Campbell), to continue working with the environmental justice advocacy groups to come to an agreement. But, he said, he was also concerned about the truckers, “especially seasonal truckers that use their trucks only occasionally. We need to make sure we don’t put them out of business altogether—and this is especially a concern in the [agriculture] industry,” he said.

But it’s not clear that the bill can be amended further. Supporters hope to pass it and have it signed by Governor Brown before the legislature takes its spring break on Thursday. That would mean passing it on the Senate floor and then immediately getting the Assembly to vote on it, skipping any committee hearings in that house. That was the apparent purpose of discussing it in the Assembly Transportation Committee yesterday, even though that committee could not vote on it, since it was officially still being considered by the Senate.

However, S.B. 1 cannot be discussed or voted on by the full Senate until 2:30 p.m. Thursday at the earliest, which is 72 hours after the last amendment was made—in the Appropriations Committee yesterday. This may be the first test of  Proposition 54, which voters passed in November and which requires bills to be “in print”—that is, online and available for the public to peruse—for at least 72 hours before being voted on. Although some insist there is room for interpretation in terms of exactly when it applies, Prop 54 proponents have already warned that they are ready to take legal action if there is a dispute.

It just adds another layer of risk that state leaders don’t need to take on.

Even though Democrats make up a supermajority in both houses, there is just enough disagreement among them that a two-thirds vote, which S.B. 1 would need in order to pass, is not a sure thing.

Which is why the legislature was treated to the very rare occasion of having the governor show up to testify in support of it. Brown testified at both committee hearings, emphasizing two of the bill’s strong points: its pay-as-you-go approach to financing, which avoids going into debt to pay for transportation; and its approximation of a user fee, in which people pay, via gas taxes, for roads in rough proportion to how much they use them.

Brown also handily shot down objections from Republican representatives, although they may not have noticed. It was a chance for them to be on the record against raising taxes, and several took the opportunity to grandstand.

It was clear the Governor harbors no illusions about any Republican support. Twice yesterday he told committee members that he would be willing amend S.B. 1—if they would vote for the bill. “But you won’t,” he said.

Both Senator Patricia Bates (R-Laguna Niguel) and Assemblymember Devon Mathis (R-Visalia) tried hard to make the point that raising the gas tax was useless. “You talk about this creating a stable and long-term revenue source,” said Mathis. “But if we have goals to reduce fossil fuel vehicles, your proposal is to tax a revenue stream that the goal is to get rid of. If everyone switches over to driverless [sic] vehicles–how does it make any sense to tax the very thing half of you all are trying to get rid of?”

But Brown was having none of that. “We’re going in two directions here,” he said when Bates brought up the same point. “Either there’s not enough money, or there’s too much.”

“If everyone switches to a more efficient vehicle—halleluiah,” he said. “we’ll cross that [bridge] when we get it. But meanwhile, there are plenty of people buying gas.”

Bates and others also tried to push on the issue of whether there was money available elsewhere for transportation. Republicans have floated a proposal to avoid raising taxes with accounting tricks, and have repeatedly claimed that truck weight fees that go to the general fund should be “returned to transportation.”

In the Assembly hearing, Assemblymember Catherine Baker (R-San Ramon) barely listened to the replies to her questions in her hurry to be on the record. She also asked about the weight fees issue, and then honed in on the “fix-it-first” provision in the bill.

“While I appreciate the money for pedestrians and bikes,” she said, “a lot of a Californians can’t get to work on a bicycle. Why are you prohibiting these funds from being used to add lanes? This will only cause more congestion problems. . . I believe we need more roads, more bridges, more transit, so we can have the jobs,” she said. “My constituents will not see a reduction in congestion” with this bill.

Senator Jim Beall explained that “the purpose of S.B. 1 is to pay for the backlog of road maintenance and repair. This is a fix-it bill,” he said. It includes specific metrics for deciding what constitutes a state of good repair, and requires funding to first go to bringing roads up to those measures.

“Once that’s done,” he said, “the annual cost of road maintenance will go down. This is a dividend for the future.”

Then a voice of reason came from freshman Assemblymember Laura Friedman (D-Glendale), who said, “We know that adding capacity does not decrease congestion—getting people out of their cars decreases congestion.”