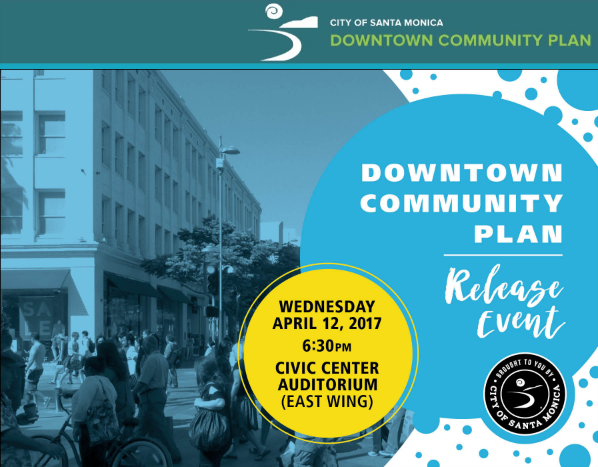 City officials are unveiling Wednesday the “final draft” of the document that will guide the future of Downtown Santa Monica for the next two decades.

The Downtown Community Plan — or Downtown Specific Plan — has gone through multiple iterations over the last couple of years, the most recent of which will be revealed to the public Wednesday at 6:30 p.m. at the Civic Auditorium East Wing.

“We’re just two days away from the release of the final draft Downtown Community Plan,” city officials wrote in an email sent out Monday. “You have been involved in shaping the plan for the past six years – thank you!”

The plan will determine the amount of new housing that could get built in the Downtown by laying out building heights and land uses. It addresses circulation, open space, and sidewalk widths.

Of course, the process has not been without controversy as opponents of new housing have called for reduced heights and densities in the downtown.

Frank Gruber wrote about the last iteration of the plan that too much had been compromised. In his blog post, “Not inspirational: more on the Downtown Community Plan,” he wrote:

But the limits on height in the DCP—for practical purposes 60 feet (five or six stories, depending on the height of the first floor)—go too far. (While in some places, in a “Tier 3” project, the DCP would permit heights as high as 84 feet (eight stories), and the plan is vague on what might happen on the four remaining “large sites,” realistically the default height limit is going to be 60 feet, because in most of downtown developers will rarely if ever attempt a Tier 3 project, which would require a development agreement.)

This 60-foot limit epitomizes nothing more than resignation, lack of imagination, and catering to irrational fears about losing downtown’s “charm and character,” as if DTSM’s character is based on the mostly nondescript buildings there rather than the people on the streets.

The plan will have changed since Gruber penned those words, but it remains to be seen how it changed and whether staff opted to return to a less compromised vision of the future after this last election cycle, during which anti-growth activists received a bruising defeat.

Measure LV, one of the most draconian anti-development measures the city has seen, lost by 11 points in November. The measure would have required a public vote on nearly all projects over 32 feet. Additionally, the measure’s author and outspoken anti-development activist Armen Melkonians was decisively routed in his bid for City Council, a campaign he closely tied to Measure LV and anti-growth sentiment.

While attitudes toward growth may vary widely in Santa Monica, the election results show that the majority of the voters do not support the more extreme anti-growth and change positions represented by Melkonians and Measure LV.

Downtown Santa Monica is one of the few remaining places in the city where new housing can be built without replacing existing apartments. It has already seen a healthy number of new units being built over the last decade or so.

It’s an ideal location for more growth, too, given just how transit-rich the area is. Besides being served by several Big Blue Bus and Metro bus lines, just last year, the Expo light rail line opened to Downtown Santa Monica, connecting the area to the growing regional train system for decades to come.

Find out more at downtownsmplan.org or click here to RSVP for Wednesday’s event.