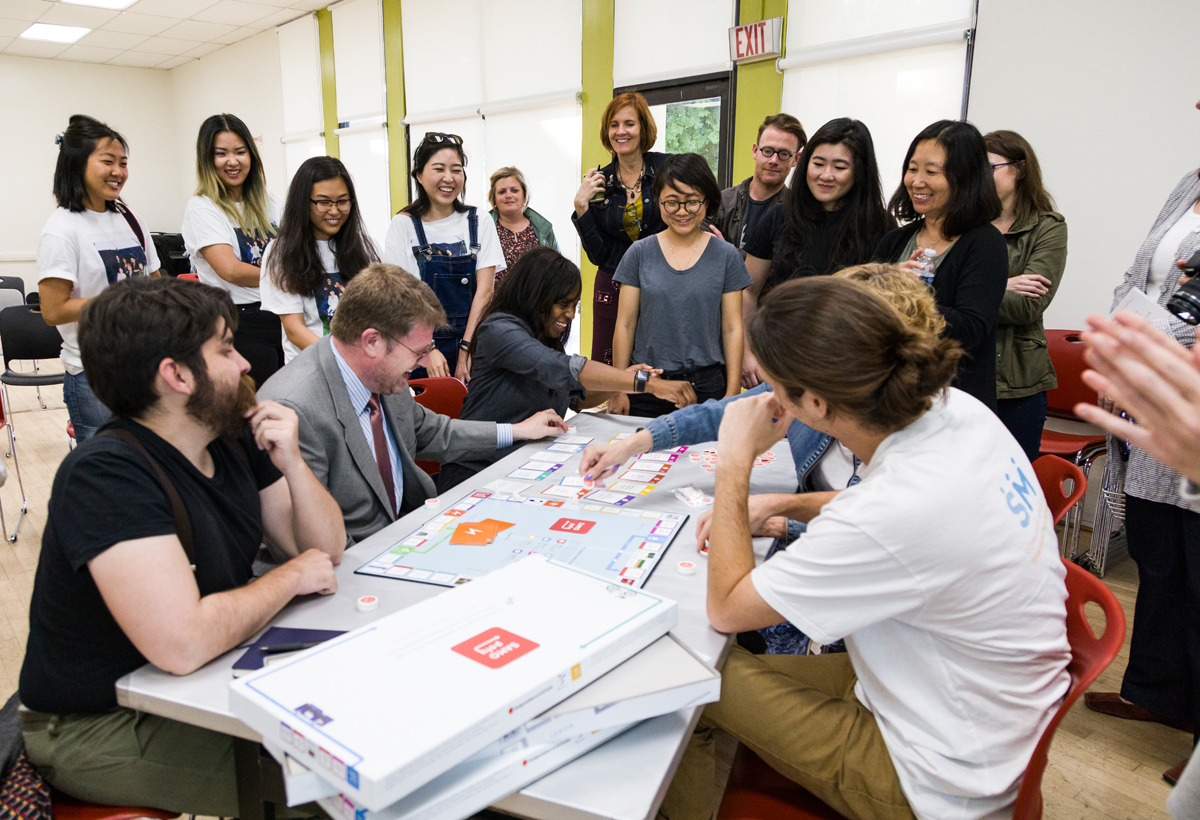 About one in five Santa Monica residents worry about paying rent or their mortgage. Only 56 percent of people in Santa Monica feel they can trust their neighbors, compared to 80 percent nationwide. And a third of the beachside city’s residents report feeling stressed out all or most of the time.

These are just some of the (perhaps surprising) results of the city’s Wellbeing survey, which is part of an ongoing effort by the city to identify what is working and what isn’t in Santa Monica in order to improve the lives of those in the community.

Most recently, the city worked with students from Pasadena’s ArtCenter College of Design to find creative ways to not only communicate the results of the Wellbeing survey but also to engage residents in finding solutions to issues the results revealed.

Advertising major Wyatt Hunt was in a group of students who came up with the idea of the Santa Monica Community Portrait, also known as the “Awkward Family Photo” project.

The team spent several weeks at Farmers Markets and community events in Santa Monica encouraging strangers to take “family photos” with each other at a booth the team set up.

“Santa Monica facilitated the ‘Wellbeing Index’ to influence city decisions and improve the lives of residents. The message we focused on was that Santa Monica’s looking out for you, like family. Creating this ‘Santa Monica Family’ by taking family photos with strangers was too much fun. We’re sparking engagement in the community and starting an important conversation in new ways and simultaneously exposing residents to the Wellbeing data. You can’t help but smile when watching others smile and make friends,” Hunt said in an email.

Getting people to interact was one aspect of the project, but the team also used their graphic design skills to visually communicate some of the findings of the Wellbeing survey, helping to draw attention to some of the community’s strengths and weaknesses.

“Even though the class is over, Santa Monica wants us to keep on growing the SM family. We will be setting up at the Annenberg Beach House mid May,” he said, adding that people can follow @santamonicafamily on Instagram to find out more.

Product Design major Margaux Reynolds and her team took a different approach. They created the SAMOpoly game, a board game based on Monopoly where players take turns rolling the dice and moving around a board, but instead of buying up properties, the players end up learning about the Santa Monica community through the results of the Wellbeing survey.

Landing on one space, for example, could reveal that about 20 percent of Santa Monicans worry about paying rent, which would set the play back a turn because they have to work overtime. Another space could send you ahead to take advantage of the city’s network of public libraries.

“The greatest challenge in this project was taking all of the data that we were given from the City of Santa Monica and using it as a narrative for our game, SAMOpoly. Data is objective and the City of Santa Monica was clear with us to be true to the data and not sugar coat the findings,” Reynolds said in an email. “How do we take that data and turn it into a game that is educational and enjoyable to play and at the same time reflects the findings? We recognize that some of the findings communicated in the game are hot-button topics, but we see that as a strength for opening up dialogue.”

“The success criteria of our brief was that people walk away from the game with a sense of the wellbeing findings and the index and we feel that the game was successful in that. We also strove to communicate the interrelationship of this data amongst its constituents; benefits to some residents can simultaneously be at the expense of other residents,” Reynolds said.

“Games are a great way to communicate this; a player may benefit as a result of their actions, but that benefit can cost another player to take a loss. There are also instances where an action from one player can benefit all players. So this interrelationship can be positive and negative,” she said.

Santa Monica’s Wellbeing Index project started four years ago when the city was selected out of 300 entries as winners of the Bloomberg Philanthropies’ Mayors Challenge.

The city partnered with the RAND Corporation to create a Wellbeing Index which sought to define, measure, and eventually improve the various facets of life that make up “wellbeing.”

“The science says, somewhere between 40 and 60 percent of how you’re doing can be changed,” Julie Rusk told Santa Monica Next in an interview in 2014. At the time, Rusk was the city’s assistant director of Community and Cultural Services. As of this past January, she became the city’s chief civic wellbeing officer, but she has been spearheading the Wellbeing Project since it started in 2013.

She pointed out that the project isn’t about changing people’s behavior, but rather connecting them to the tools they need to improve their lives, if that’s what they want to do.

Of course, some of the factors that impact residents’ wellbeing may prove more difficult to address than others. High rents, for example, are a direct result of the city’s long-standing slow-growth policies which have been recapitulated in the most recent draft of its Downtown Community Plan.

Then, there is the problem of street safety. Recently, five people were killed in a series of traffic incidents, but it remains to be seen if there will be a concerted effort by the city to improve safety or if it will continue a “business as usual” approach.

The unwillingness to confront the root causes of these issues at a policy level will be a major impediment to improving residents’ wellbeing, at least as it relates to these problems.