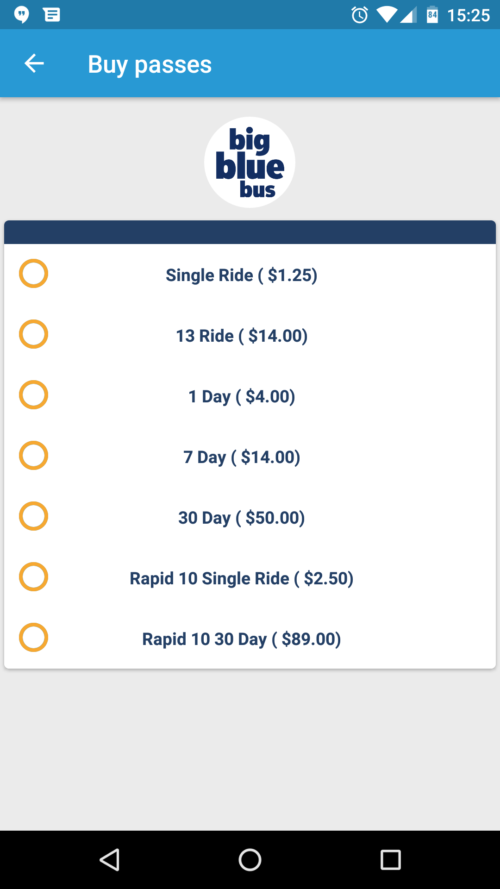 Starting April 3, Santa Monica’s Big Blue Bus will give riders the option of paying their fares through their smartphones.

According to a report released today on the City’s website, the municipal transit service started a pilot program today with Token Transit that allows people to buy passes through a smartphone app and then board buses by showing the driver the pass on the passenger’s smartphone.

“The customer interface is simple. Customers download the [Token Transit] app from Google Play or the App Store, set up their accounts, and then purchase passes,” according to the report [PDF].

“All BBB passes are available, as well as single ride tickets. When ready to ride, customers activate the prepaid tickets shortly before boarding, which appear as colorful, animated tickets on their phones,” the report reads.

As the rider boards the bus, they show the pass on the phone to the driver, according to the report.

According to the report, the pilot is relatively limited in scope. The initial agreement sets a limit of $50,000 to be paid to Token Transit in commission, which means a maximum of $500,000 spent by transit riders through the app for passes.

Officials estimate that based on anticipated use, the pilot could end in a six-month period.

“Although the pilot could run for as long as one year, given BBB’s current ridership and known fare collection behaviors, staff projects that the threshold will be reached in approximately six months from launch. At that point, customers would be informed that sales of new passes will end, and BBB would continue to honor purchased passes for an additional 120 days to allow customers the opportunity to use their tickets,” according to the report.

Token Transit is already working with Regional Transportation Commission in Reno, Nevada and with Eureka, California.

One of the main reasons to allow for payments through mobile phones is to speed up boarding time, which the report notes remains one of the top priorities to Big Blue Bus riders in customer surveys.

“A cash transaction, upon boarding the bus, at the farebox typically takes 23 seconds, whereas, using a prepaid pass (magnetic or TAP) takes only 3 to 4 seconds,” the report says.

“In order to improve trip time speeds, which continually rank high in priority in BBB customer feedback surveys, staff has implemented new solutions to reduce cash payments by providing other, more convenient options, including the provision of a mobile application fare payment alternative to complement the other fare media options currently available to BBB customers,” the report said.

Still, according to the report, as of last December, nearly half (47 percent) of Big Blue Bus riders still pay their fares with cash.

Should the pilot program be a success, then Big Blue Bus staff will put out a call for proposals for “a more robust mobile ticketing solution,” the report reads.

Success, the report noted, will be measured in part by whether the new payment option brings in new riders. Recently, the Big Blue Bus has seen its ridership drop, a trend that has been seen in public transit systems across the nation.