Home News To Fight the Impact of Global Climate Change on Its Beaches, Santa... 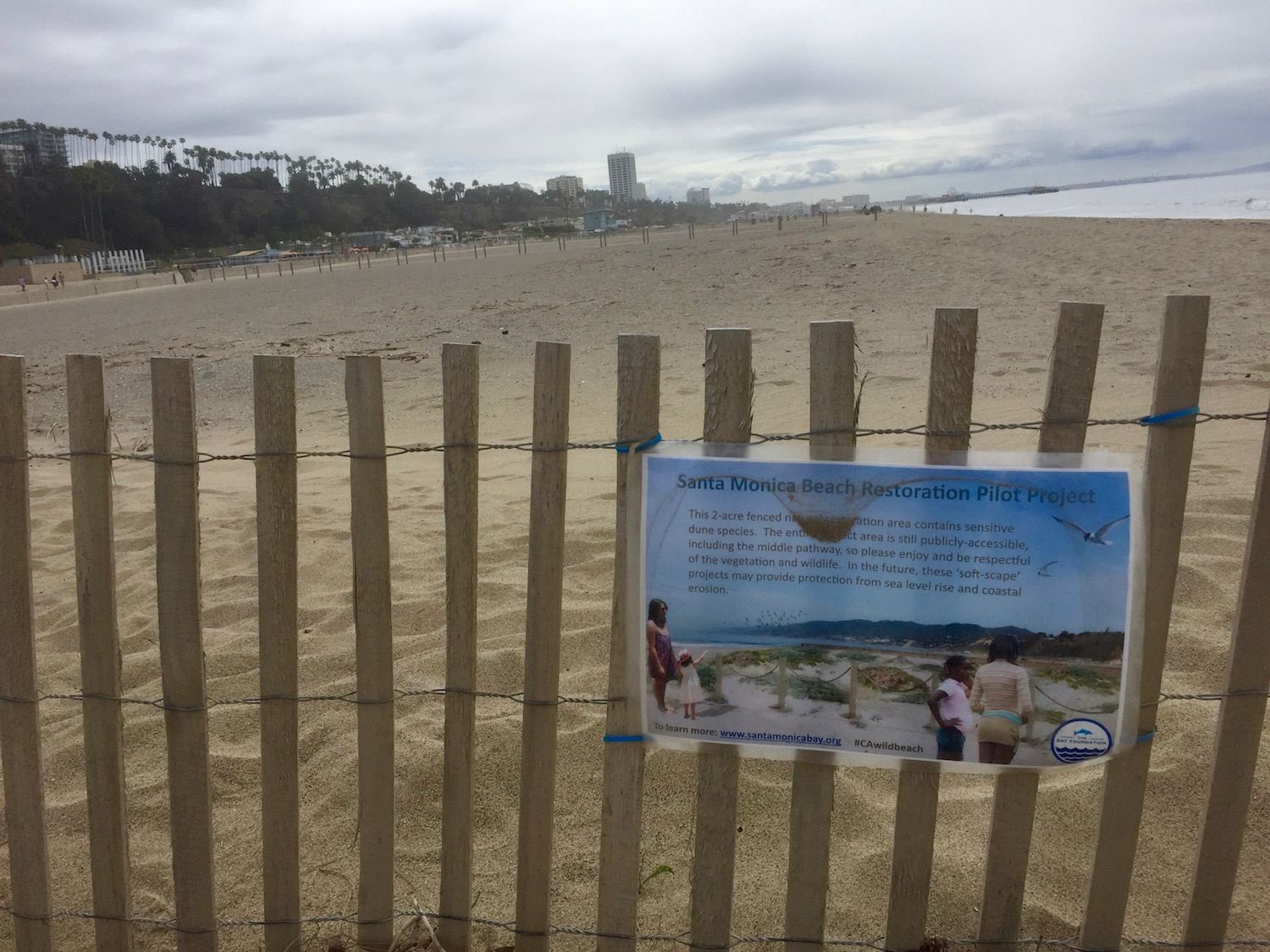 But the beach is more than just a prime recreational destination. In the coming years, in fact, California’s coastline may play a vital role as a first line of defense against the devastating effects of climate change, including rising sea levels.

That’s the lesson, anyway, behind a pilot project underway in a three-acre section of the Santa Monica coast just north of the Annenberg Beach House. The area is sectioned off by low-lying, slatted wooden fencing. A small sign hanging from the fencing lets people know that this area is called the Santa Monica Beach Restoration Pilot Project.

It’s a joint undertaking by the city and The Bay Foundation, with funding from a mix of government and commercial interests ranging from the Environmental Protection Agency to the outdoor gear and clothing retailer, Patagonia.

The goal of the pilot project is to return the beach to a more natural state, with plenty of native vegetation and without the frequent grooming that occurs in other areas of the beach. It’s hoped that the pilot project will prove to be a low-cost, low-impact method of sheltering the coast not only from rising sea levels but also from beach erosion and storm surges, all very real threats to the local coast.

Santa Monica’s project could not be timelier, a point made clear by a recent dire report from the U.S. Geological Survey. The report concluded that up to two-thirds of Southern California beaches may be completely gone by 2100 if nothing is done to protect the coast from expected damages as a result of increased storms and tidal surges due to climate change.

“Beaches are perhaps the most iconic feature of California, and the potential for losing this identity is real,” said Sean Vitousek, lead author of the study, which employed a newly-developed computer modeling program. “Losing the protecting swath of beach sand between us and the pounding surf exposes critical infrastructure, businesses and homes to damage.”

Meanwhile, President Donald Trump is working to gut the EPA and undo actions of the previous administration to battle climate change.

That means that local agencies such as the city of Santa Monica will be forced to find solutions to environmental threats on their own.

“We are in an active phase right now of looking at options for addressing sea level rise,” said Constance Farrell, a spokesperson for the city of Santa Monica. Farrell said the beach restoration project will be incorporated into the city’s Climate Action and Adaptation plan, currently being developed.

Ensuring the health of the city’s coastline is a key part of the plan, Farrell said, with the goal of finding a balance between protecting beach areas while allowing access for people to enjoy them.

Part of the city’s effort is educational. In the fall, specialized viewers were installed on the Santa Monica Pier that displayed for visitors a dramatic visualization of how rising sea levels would flood the Santa Monica coastal environment.

And now comes the beach restoration project, another public outreach effort to introduce visitors to a new way of thinking about the beach.

Promotional pictures for the beach restoration project show a coastal area covered in small sand hills and lush green vegetation, with sea birds circling overhead. That’s a much different approach to maintaining beaches than is used today in Santa Monica and throughout Southern California, where beaches are typically machine-groomed, barren, and flat.

On a recent weekday, the restoration site appeared very similar to the surrounding beach, still flat and with little visible vegetation. The sand within the project site, which is not being machine groomed, appears darker and coarser than the sand outside the enclosed area.

Planners hope that as the site develops and stands out more from the surrounding beach, visitors will stop and take notice, and begin to see how beaches may play a role protecting the coastline in the future.

Similar restoration efforts are underway in other parts of the state. One project is at Surfer’s Point in Ventura, where erosion has swallowed up portions of a coastal bike path. And in Point Reyes near San Francisco, nonnative plants are being removed and the natural dune habitat restored as part of another project.