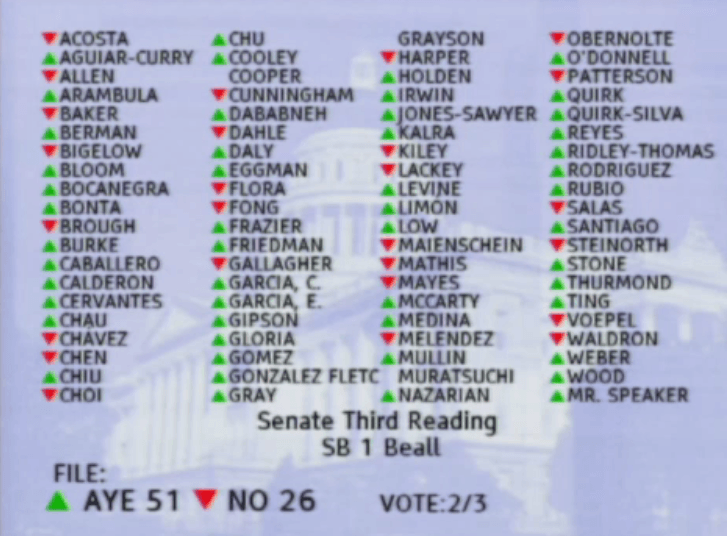 Last night, the California legislature passed S.B. 1, the transportation funding bill that has been hard fought for the last two years. The Senate passed it with a vote of 27-11, and the Assembly by 54-26. It was barely enough to meet the 2/3 threshold required for legislation that raises taxes, but it was enough.

The last vote ended with a nail-biting finish. At close to 11 p.m., the voting screen paused as shown in the image above, and an intense five minutes passed before the last three votes were cast, putting the measure just over the top.

All afternoon the two houses had hosted “debates” on the bill, but those served mainly as an opportunity for grandstanding. Most minds had been made up, and the real negotiations, to convince the few undecided votes, was going on behind closed doors.

The extent of those private deals may take a while to reveal themselves, because they were not included in the bill itself. S.B. 1 could not be amended at the last minute because Prop 54, passed by voters in November, requires bills to be in their final form for at least 72 hours before being voted on. Amending S.B. 1 would have triggered a waiting period, and legislative leaders did not want to wait until after the spring recess.

But other bills can be amended, and they were. One was S.B. 132, a budget bill that had an interesting variety of transportation allocations added to it. Some of those were highway expansions–toll roads, express lanes, and interchanges–in Riverside County. That’s the district of two undecided legislators, Senator Richard Roth and Assemblymember Sabrina Cervantes, both Democrats who ended up voting yes on the bill.

Also added to S.B. 132 was money to extend the Altamont Corridor Express train that now goes from San Jose to Tracy, all the way to Merced. That would bring it to the districts of Assemblymember Adam Gray (D-Merced) and of Senator Anthony Cannella (R-Ceres). Both voted for S.B. 1, and Cannella was the only Republican who did so.

Consider that. A promise to support transit in a Republican’s district helped garner his vote for a transportation bill utterly opposed by Republicans.

Another amendment to S.B. 132 added money for a competitive grant to “advance implementation of zero/near zero emission warehouses and technology.” This may have been what convinced Senator Connie Leyva (D-Chino) to vote for the bill. She was one of few legislators who openly expressed deep concern about the last-minute amendment exempting trucks from air quality rules, and in a statement she said she decided to support the bill because she “secured commitments from Senate leaders and the Brown Administration that they will work with me in the near future to ensure that we continue to protect California’s air quality from mobile source emissions.”

While these concession, and likely more, were being made, the Senate and Assembly floor featured grand, impassioned speeches that served little purpose. Republicans angrily vented that the bill is:

Assemblymember David Chiu (D-San Francisco) responded to that last point, saying, “We could cut education. We could cut Medi-Cal. We could shut down the judiciary system. We could stop fighting fires for two and a half years… I would love to hear specifics [on what should be cut from the general budget], but I don’t think we’re going to.”

It was a depressing performance by the Republicans, who betrayed a poor understanding of the state budget process and of transportation funding, and even of the bill itself. Several repeated talking points that were flat-out wrong (that the bill, for example, allocated money for “boats”). As a group, they did the state a  disservice by indulging in partisan posturing, and wasted an opportunity to educate themselves and their constituents on the purpose and use of taxes.

When Senator Janet Nguyen (R-Garden Grove) demanded to know, “where is this money going?” it was too much for Senator Holly Mitchell (D-Los Angeles).

“I need to remind my colleagues that we ultimately have fiduciary responsibility over the budget process,” she said. “That requires that all of us show up, . . . to dig in, and do the deep, hard work.”

“It’s one thing to stand on the floor and say ‘I don’t have confidence’,” she said. “It’s another thing to show up to budget hearings on Thursdays—when it may not be convenient because you’re trying to catch a plane home—to put in the work, to read the documents, and to fundamentally understand what we’re voting on, and what is being proposed.”

In the Assembly, after hearing yet another story about a constituent who was going to have trouble saving up for a house if they had to pay more in gas taxes, Assemblymember Shirley Weber let it rip.

“It is amazing to me that all of a sudden the people on this floor are so concerned about the poor, about the people who are struggling every day,” she said. “When almost every issue we bring forward to deal with that, we run into resistance.”

“It is not easy to vote for more taxes,” she said, “but those are the kinds of decisions grown people have to make. It would be easy for us to pretend that we don’t know what happened eight years ago, but we know exactly what happened.”

“It’s easy to attack,” she told her counterparts. “You can feel comfortable, knowing that we have 55 Democrats in this house, and that we’re going to take care of the business of California.”