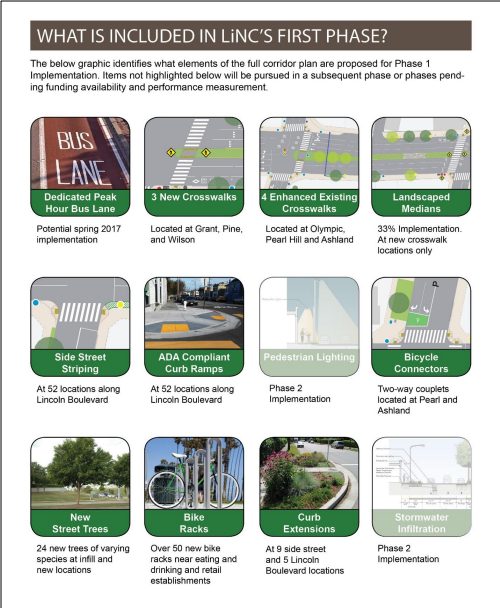 The Santa Monica City Council passed the first stage of a plan to make Lincoln Boulevard safer, but not everyone was satisfied that it went far enough.

The City Council voted 5-to-1 to move forward with the first phase of the Lincoln Corridor Neighborhood (LiNC) plan with Councilmember Terry O’Day casting the lone dissenting vote because he said he thought the plan focused more on landscaping than actual safety improvements to the boulevard.

“What I’m concerned with is that the plan that I see today is making value decisions that I don’t think reflect how I’ve been trying to make those decisions in a planning context in this city,” O’Day said. “And, in particular, it looks to me that it prioritizes beautification over safety of bikes in particular. I think there is a real lack of thoughtfulness related to bikes in this plan.”

The plan affects the stretch of Lincoln in Santa Monica south of the 10 freeway to the southern edge of the city, which was operated as a highway by Caltrans until the city took it over several years ago.

O’Day managed to get two out of three amendments he suggested attached to the main motion to approve the plan: 1. To have staff explore how to improve bike crossing at five intersections instead of the currently proposed two and 2. To have staff explore the possibility of allowing cut-throughs for bikes on the curb bulb-outs so that passing bicyclists wouldn’t be forced into traffic.

O’Day’s third request — to have staff consider doing a paint-only trial run with the proposed medians to allow for future flexibility and consideration of street design — fell flat when Councilmember Kevin McKeown said it wasn’t friendly to the motion because it would cause unnecessary delays to the implementation of the LiNC plan.

“This is the community’s best shot,” McKeown said. “A lot of thought has gone into this.”

In the first phase of the LiNC plan, there are new medians, peak hour dedicated bus lanes, curb extensions, and improved lighting and more street trees. Staff said that the proposed medians would act as pedestrian refuges for people crossing.

O’Day’s concern with the proposed medians was that he believed the street could be better redesigned to more safely accommodate people riding bikes on Lincoln. The LiNC plan will turn the parking lane on either side of the street into a dedicated bus lane during rush hours. It is city policy, however, to not allow bicyclists to share bus-only lanes with buses (though this is done in adjacent Los Angeles.) When the lanes revert to parking lanes, cyclists can share the lane with parked cars. O’Day asked if some infrastructure could be added to improve the safety of those cyclists who would still share the parking lane with parked cars when the lane wasn’t operating as a bus-only lane, but staff argued it would cause confusion during the times the lane was operating as a bus-only lane.

Councilmember Gleam Davis echoed O’Day’s concerns that even if the city hoped to divert bike traffic to neighboring side streets, people may still ride on Lincoln as the side streets are either much steeper or don’t go all the way through. She also wanted staff to look into what could be done to make the intersection at Lincoln and Ocean Park safer for people on bikes. She floated the idea of a “Dutch intersection,” which extend protections for bicyclists into the intersection.

In response to concerns by local business owners about the loss of meter parking for a couple hours a day when the parking lanes would be used as bus-only lanes, Davis wanted to see if the city could help facilitate shared parking arrangements between businesses that have ample off-street parking and those businesses that have none.

Trying to get at the question of whether or not medians do improve pedestrian safety, O’Day asked if there had been any data collected after medians were installed on Wilshire and Pico Boulevards that would illustrate whether safety demonstrably improved as a result.

Staff did not have figures available.

While Mayor Ted Winterer acknowledged O’Day’s concerns, he said he believed that it would be problematic to further delay the project, especially given the recent death of a woman who was crossing Lincoln Boulevard at Hill Street, one of the intersections slated for safety improvements under the LiNC. The woman was one of five people killed in a recent spate of traffic crashes.

O’Day, along with Winterer and Councilmember Pam O’Connor, recently called for an update on the city’s Pedestrian Action Plan, the Bike Action Plan, and the adopted goal of “Vision Zero” by the city. That item will come before the Council on May 9.