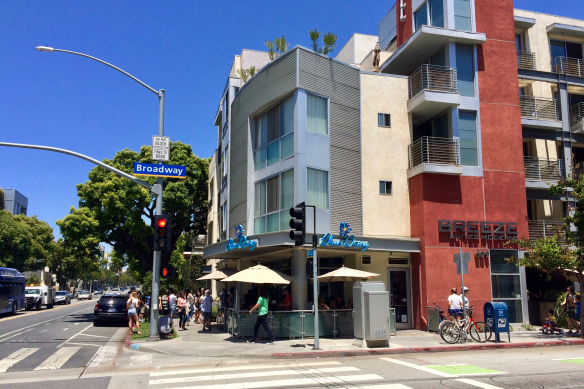 There are good ideas in the Downtown Community Plan (DCP): ideas about the role of Santa Monica’s downtown, about nurturing community in “our town” with more and better housing and local-serving retail, about more “complete streets” that are more friendly to pedestrians, about more quality architecture and more adaptive reuse, about more travel options. There is a lot of more in the ideas.

But ideas are not planning. The planning in the DCP, mostly in the form of numbers and procedures, runs counter to the ideas. The planning is about less; less of everything, that is, except commercial development.

To understand the impact of the DCP one needs to understand the planning regimen it is replacing, but the DCP doesn’t describe or compare itself to the existing rules. You have to know the history yourself.

Key to that history are plans the City enacted in the 1990s that have been extraordinarily successful at producing the kind of downtown—a walkable neighborhood complementing a vibrant economic center—that the DCP says it wants. The DCP itself acknowledges the role of the ’90s planning; in its historical overview, it says that in the 1990s: “Zoning Code amendments provided floor area ratio (FAR) incentives for residential uses to encourage housing development for a mixed-use Downtown. As a result, the number of Downtown residential units doubled over the next 15 years to approximately 2,800 units.”

But the DCP doesn’t describe what those amendments were or what they did. (This is not the only gap in the narrative. The most important event in downtown’s recent history was the conversion of the Third Street Mall into the Promenade, but the Promenade isn’t even mentioned in the DCP’s discussion of the “historic planning context.” It’s all of a piece with the plan’s general reluctance to acknowledge how urban downtown Santa Monica is.)

So, what happened in the ’90s? The City Council, responding to the success of the Promenade and to a court decision that forced Santa Monica to increase housing development, radically incentivized the building of housing downtown. The council did this by turning the commercial zoning downtown upside down: the new zoning, though still called “commercial,” allowed on a given lot twice as much housing development than whatever commercial development was allowed.

To apply numbers to this, the zoning in the downtown commercial zone (“C3”) generally allowed a 2.0 FAR—meaning that square footage of development (“floor area”) on a parcel could equal up to 2X the amount of the square footage of land). The base FAR along Sixth Street was less (1.5), while near the Promenade (in the “Bayside Commercial District”) it was more: mostly 3.0. The double FAR for housing applied in all the zones. Also in response to the court decision, the council made it easier to build housing by relaxing what had been extreme requirements for on-site affordable housing.

The double FAR worked like this: where a developer of two contiguous lots (15,000 square feet) (a typical configuration) could build 30,000 square feet of commercial development under a 2.0 FAR, a residential developer could build 60,000 square feet. The density bonus, combined with steadily rising rents (a product of the regional housing crisis as well as increasing job growth on the Westside), made building housing downtown a better investment than commercial development. Developers even found it profitable to build, without subsidy, apartments that were deed-restricted to be affordable to moderate-income households.

As the DCP acknowledges, the ’90s zoning was a rousing success, resulting in a new neighborhood of about 5,000 residents. Largely led by housing development downtown, the City as a whole greatly improved its housing production. While between 1990 and 2000 the City had virtually no housing production (a net increase in units of 0.2%), between 2000 and 2010 the City had a 6.4% increase, which was better than the City of Los Angeles (5.7%) or the County (5.3%). (These figures come from the City’s most recent general plan housing element.)

For the most part, the new apartments downtown were built in five, sometimes four or six, story buildings with local serving retail or offices on the ground floor. The impact of these apartments has been entirely positive. As I have often mentioned, my mother and father moved into one of them, on the 1500 block of Sixth Street, when the building opened in 2003. We’ve watched the neighborhood blossom. If you doubt this, spend half an hour walking around the blocks emanating from the corner of Fifth and Broadway, especially in the evening or on a Sunday morning when the neighbors are out and about strolling, or waiting to get into restaurants. Here’s a photo of the Sunday brunch scene outside the Blue Daisy Café, Fifth and Broadway:

It’s like . . . civilized? (How many times have I heard anti-development folks in Santa Monica ask plaintively, “Why can’t Santa Monica be more like Europe?” or in the next breath ask disdainfully, like you’re some kind of idiot for liking apartments and transit, “What! Do you think we’re in Europe?”)

So you ask, if it ain’t broke, why fix it? Good question. Downtown Santa Monica was doing quite well, thank you, before the City embarked on this five-years-going-on-infinity process to make it better. Sure, the ’90s planning could be improved (someday I’ll get into that), but the DCP moves in the wrong direction.

The biggest problem is with FARs. The DCP has for practical purposes removed the residential advantage that was so fruitful. Instead of doubling the FAR for housing, the DCP gives housing developers minor increases in FAR, while generally increasing allowable FARs overall, making commercial development more competitive.

While the basic FARs in the old downtown C3 and C3-C zones ranged from 1.5 to 2.5 (which would, again, be doubled for residential), the basic FARs for the corresponding DCP areas (the Transit Adjacent (TA) and Neighborhood Village (NV) areas) under Tier 2 (which largely corresponds to the same level of development review) are higher, 3.0 for TA and 2.75 for NV. A residential developer gets only a 0.5 bump (to 3.5 and 3.25 respectively). (By the way, I never heard a convincing argument from planning staff or anyone else for what’s wrong with developing housing downtown at a 4.0 FAR, a level that under the DCP can only be reached in the TA zone, and then only with a development agreement.)