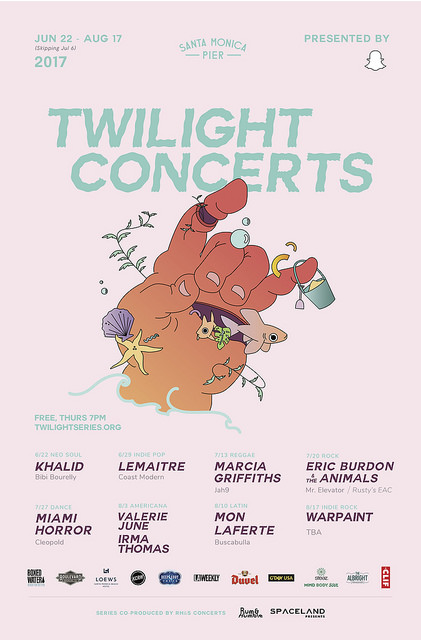 Summer is around the corner and in Santa Monica for more than 30 years that has meant free concerts on the Pier.

The lineup for the 33rd annual Twilight Concert Series, sponsored by Snap, Inc., is out today and includes performances by Warpaint, Eric Burdon & The Animals, and R&B artist Khalid. There’s also still one performance to be announced.

While the concerts will be on their usual Thursday evenings starting June 22 and ending on August 17, this year, the series will be shorter as a cost-savings measure. There will be no concert on July 6, given the crowds that usual head to the beach for the July 4 holiday.

“Twilight is not only one of the last great free concert series but an annual exercise in community-building that reconnects families, friends and neighbors, which the City’s own Wellbeing Survey found is one of the primary drivers of a happy community,” Santa Monica Pier’s Executive Director S. Jay Farrand said in a press release Thursday. “The emphasis on the diversity of genres, artists and eras in the lineup ensures a cross pollination of generations, backgrounds and income levels that makes it unique among festivals.”

Despite efforts by some in the community to end the 30-year tradition, city officials approved plans to continue the concerts, at least for the time being. Whether the city will allocate funding to cover the costs of the free concerts remain an open question in the future.

Below you can see a list of the performances scheduled for this year’s series: