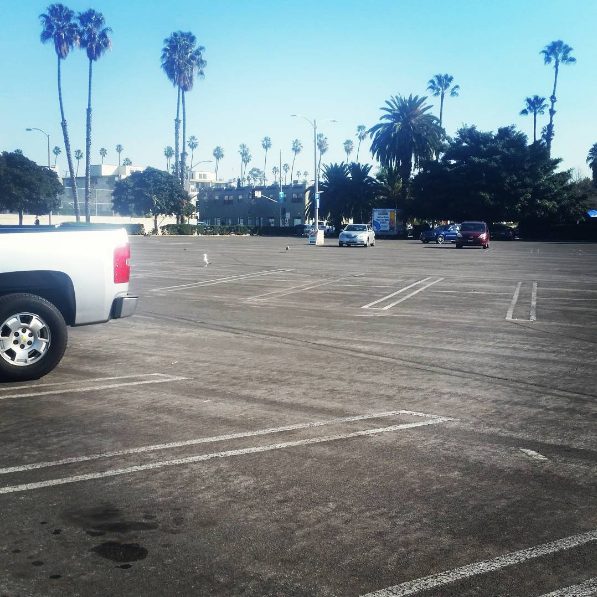 On Tuesday, the Santa Monica City Council will weigh its options for a possible sports field at the Civic Center. The project could cost nearly $100 million, primarily due to parking costs.

Several of the proposed options in the staff report, which, in a highly unusual move, makes no recommendation about how to move forward, outline the costs and logistics of replacing the roughly 600 parking spaces on the city-owned land with a sports field, a cause championed last year by certain members of the community.

The priciest option, according to the staff report, would put a permanent field on the parking lot, which is directly across 4th Street from Santa Monica High School. Under the field, two stories of subterranean parking would be built to replace the surface parking displaced by the field. That option would run $95.4 million, according to the staff report. About 91 percent of that money would go to building the parking.

“Given the Council’s commitment to constructing additional sports fields as part of the Airport Park expansion and the City’s other capital project obligations, the City’s financial contribution of nearly $48 million towards construction of a permanent field with subterranean parking would need to come from passage of a potential local general obligation bond in November 2018,” according to the staff report. The school district would be responsible for the other half of the cost.

“This would require two-thirds voter approval and this project alone would constitute a large portion of the proposed citywide park funding measure,” staff wrote. This option raised concerns at the Recreation and Parks Commission meeting on June 15 because of the high capital costs and the Commission expressed “dissatisfaction with the possibility of utilizing a large percentage of a potential future parks bond to finance it,” staff noted

A temporary field at the site would be significantly cheaper — an estimated $8.6 million in capital costs with a net cash flow of negative $16.7 million over time due to operations and lost revenue from parking — because a temporary use would mean, theoretically, not having to replace the parking. But that issue is complicated by the fact that the parking lot is used by both the adjacent county courthouse and staff and faculty working at Santa Monica High School. Additionally, any removal of parking that close to the coast would require a comprehensive parking analysis and eventual approval by the Coastal Commission, which routinely frowns upon removing parking so close to the beach because its desire to preserve access to the coast, according to the staff report.

The other complicating factor is the adjacent Civic Auditorium, which is more than half-a-century old and a designated historical landmark in need of tens of millions of dollars of repairs and seismic retrofitting.

The city undertook a lengthy public outreach process and even convened a “Civic Working Group” (CWG) to brainstorm and recommend the best options to move forward to find funding to rehabilitate the venue, once host to the Academy Awards and concerts featuring the likes of Rolling Stones and James Brown, and to fund its ongoing operations.

“A cultural district using the whole site, possibly with income-generating properties to subsidize the Civic [Auditorium], was the CWG’s mandate,” Frank Gruber, who sat on the working group, wrote in his account of the area’s history.

Though the Civic Center’s proximity to the Expo light rail line and several major bus routes does make it an ideal site for some activity, such a cultural district is not on the table, at least in the short term.

And, given the concerns about the need for Santa Monica High School staff and faculty having parking, it might not be a bad idea to consider the site for some housing for district employs who currently need to commute in from other parts of the region, but that’s not currently an option being considered for the site.

A field at the Civic Center, even a temporary one, could significantly complicate any consideration of any future use for the site and make it harder to find a private operator to take over management of the Civic Auditorium, which was what the Civic Working Group recommended.

Staff acknowledged that there is a need for sports fields in Santa Monica in large part because there is a narrow band of a couple hours every day when there are high levels of demand to use existing sports fields.

One of the alternate options offered in the staff report is to build a field at nearby Memorial Park on nearly three acres of land currently being used by the city. A field there would be slightly farther away. While the Civic Center parking lot is across the street from the high school, Memorial Park is about seven blocks west.

“While this alternative would provide an additional multipurpose field centrally located in the [c]ity, it would not be adjacent to Samohi thereby requiring students to continue to travel to Memorial Park for practice and games. Should this alternative be constructed, [c]ity staff would commit to assist SMMUSD with identifying safe modes of transportation for students from Samohi to the park, including exploring a possible direct shuttle option,” according to the staff report.

On the plus side, however, the fact that the site is farther east means it’s not subject to Coastal Commission review, which could make the planning process for the project faster and cheaper. And it wouldn’t impede the process of trying to find an operator for the Civic Auditorium.