Rayford Brown was homeless, and restarted his pursuit of a college education on academic probation. Isabel Castillo is a DREAMer and a sexual assault survivor who refused to give up in spite of overwhelming obstacles. Micca Cao came to the United States to pursue a childhood dream and to “break free.”

At 6 p.m. on Tuesday, June 13 at the SMC Corsair Field—with friends, family, professors, and counselors cheering them on—Brown, Castillo, and Cao will be among the thousands of students graduating from Santa Monica College. The college will award 2,949 Associate Degrees—including 721 Associate Degrees in Transfer—and 1,478 Certificates of Achievement to 3,753 students. The youngest graduate is 17 years old, while the oldest is 71; film producer/director Frank Stiefel will deliver the commencement address.

Rayford Brown: Journeying Into the Sunlight

Veteran Rayford “Ray” Brown became homeless after he lost his job during the Great Recession.

“There were lots of times I would fall asleep in a night class,” says Brown. “I knew that when I finished the class, I was going to have to find somewhere to sleep.”

A veteran of the U.S. Marine Corps—he had served tours in Alaska, Japan, the Philippines, and South Korea in the 1980s—Brown was “part of the middle class that fell off during the recession.” He held a number of jobs, including one as regional manager of a logistics company, but soon found himself not only out of work, but also, for the first time since 1979, unable to find work.

A friend encouraged him to train in the renewable/solar energy field. It had been 25 years since Brown had last been in school, but he made some inquiries, and found a “career institute” where he took classes on solar energy. He finished in the top five of his class, but it meant little because the institute was unaccredited.

Brown went to Los Angeles Trade Technical College to pick up a catalog, but couldn’t get one on campus, and didn’t realize he could access class offerings online. In late 2011, he came to the SMC main campus, and was able to get a catalog right away. He took it as a sign that he should attend SMC.

But there was just one problem: Brown had attended SMC in 1986 and earned poor grades. His GPA was 0.49, and he was placed on academic probation.

“At that point I was a little disheartened—I was homeless, and just trying to go back to school,” says Brown. “But I loved to read. So, for the first year and a half, I just took one or two courses while I tried to straighten up my life.”

Then, in 2013, Brown decided that he would take on a full load of classes. He went from being on academic probation to being on the Dean’s list—an honor for students with a 3.0 GPA in 12 or more units. And he found affordable housing with the help of the Veterans Administration.

“I went from not really caring about my grades to a point where, if I got a C, it really bothered me,” says Brown. “And I owe it to Santa Monica College pushing me to be the best that I can be. This place is the best thing to ever happen to me.”

Professors like Stuart Cooley in renewable energy encouraged Brown to sign up for certification courses from Southern California Edison—and he has a thick stack of certificates to show for it.

Brown will graduate on June 13 with an Associate degree in Solar Photovoltaic Installation and an Associate degree in Recycling and Resource Management. His plans for the near future include establishing a company that will provide energy efficiency consulting services, as well as jobs for his fellow SMC students, alongside whom he has acquired a world of knowledge about the field.

“Going from being homeless to getting all these degrees and certifications, despite my situation,” says Brown, “I know I’m here for a bigger purpose. I want to use my experiences to show others that as long as you don’t give up on yourself, and wake up every day, you have a chance.”

While she was still in high school, Isabel Castillo was detained by the United States Border Patrol for about five days in an “icebox”—a block of temporary holding cells in cold, unkempt conditions for undocumented immigrants. She had been arrested helping her brother cross back into the U.S. Castillo went through court proceedings, and spent two months in a foster home before going home. With her school absences and changes in residence, she lost all her scholarships. But she never gave up.

Castillo is a DREAMer and a sexual assault survivor who has persisted and triumphed in spite of her obstacles. A daughter of Peruvian parents, she came to Los Angeles at age six, and—in spite of all the hurdles—views life with hope.

“Through this life experience, I learned strength and resiliency to never let anything beat me down,” says Castillo. “If I can go days unable to sleep and under anxiety for my future, I can survive any assignment in college.”

When she arrived at SMC, Castillo found a community that pushed her to succeed. “I’ve been told I’m not good enough,” she says, “but my SMC professors and counselors helped me believe in myself.”

“Isabel is dynamic, and her enthusiasm is contagious,” says English professor Mario Padilla. “She will no doubt achieve all her goals because the centrifugal force of her energy is unstoppable.”

Castillo will graduate with an Associate in Arts in Communication and Media Studies, with plans to attend the University of Southern California and major in communication. She hopes to work in the entertainment and journalism field to share the stories of the voiceless.

Micca Cao: The Future is All There is

Micca Cao came to the United States because she wanted to “break free.” While most people don’t know what their future holds, a woman in China has her future predetermined, says Cao, and that this was her mother’s reality: she was married at a young age, expected to serve and protect her family even at the cost of her dreams and own wellbeing.

“My world collapsed after the loss of my beloved mother,” says Cao. She was attending high school at the time, but began skipping classes and lost all interest in her own future. Her father got Cao a job as an accountant with a friend who owned an import-export company. But her heart was not in the work, and after three years, she quit.

Her childhood dream was to study abroad and to travel the world. “Why not give it a try?” Cao thought. She signed up for weekend International English Language Testing System (IELTS) classes and began to research schools overseas, eventually deciding to come to the U.S. After one year, she received her acceptance letter from Santa Monica College.

“It was a mistake,” says Cao, “because I wanted to apply to Pasadena City College, but I missed the deadline. It was the most beautiful mistake I ever made in my life—and that’s how I ended up here.”

Her father had three children and Cao’s decision added a significant financial burden, and she faced resistance from her whole family. But she was unstoppable, and used her savings to support herself for the first year at SMC.

Like many international students, Cao was faced with challenges, including finding housing, developing her proficiency in English, and making friends. But in just one year, she had joined the Phi Theta Kappa Honor Society (PTK) at SMC, was elected as a PTK officer, and made new friends. Then, a fellow student encouraged her to run for SMC Associated Students Director of Student Advocacy. With just one friend helping her, Cao launched her independent campaign—and won by 798 votes.

Before she got involved in the community, says Cao, she felt “like an outsider.” All of that changed. “I felt like I was a baby—like I had been born again. Every day after that, I woke up and felt happy for the new day.”

Her advisor—Dr. Nancy Grass, the Interim SMC Associate Dean for Student Life—also helped advance Cao’s metamorphosis by reminding her she was not alone in having to navigate new things, and that transformation lay in her own hands.

Dr. Grass suggested that Cao take on a civic engagement project at SMC spearheaded statewide by the California Community Colleges Civic Impact Project, and championed at SMC by Superintendent/President Dr. Kathryn E. Jeffery. With a handful of PTK volunteers, Cao helped register more than 200 SMC students to vote in the 2016 local, state, and national elections.

“Most of us were international students,” remembers Cao. “It’s not like we had the right to vote—but we were so happy to get involved in this kind of civic engagement activity.” She was selected for the prestigious California Community Colleges Civic Impact Scholars Program in recognition of her advocacy efforts during the project.

She was also recently selected as one of the 2017 SMC Dale Ride Interns, and will be interning at Oxfam International’s Washington D.C. office this summer.

“I think my character is just like my mom,” says Cao. “She used to keep everything inside, and let only the positive out.” No one in her family had attended college. “My mom graduated from high school, and my father graduated from middle school.”

Cao will be the first person in her family to earn a college degree. She is graduating with an Associate degree in Public Policy and has been accepted to all the University of California campuses she applied to—UCLA, UC Berkeley, UC San Diego, and UC Santa Barbara—and is awaiting word from her top choice, Columbia University.

She has a long term career goal to be a diplomat, and wants to build bridges between China and the U.S. At SMC, says Cao, “I’m getting all the skills I need.”

For the eighth year in a row, the ceremony will also be webcast live and available on the SMC Alumni Association webpage. Families and friends from all over the world who are not able to attend graduation will be able to watch the ceremony and see the graduates receive their diplomas. 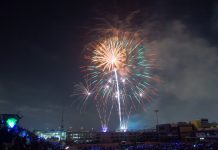