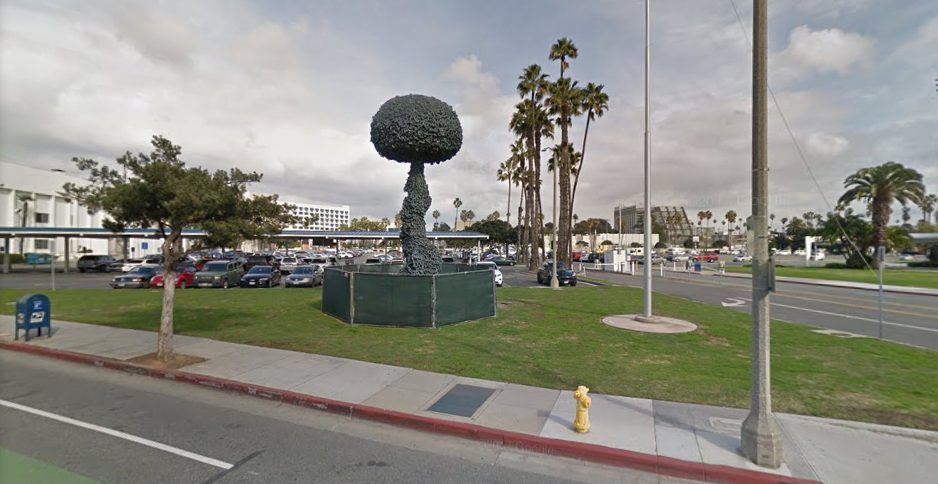 “Chain Reaction,” the anti-nuclear sculpture by the late Pulitzer Prize-winning cartoonist Paul Conrad, will be re-dedicated on June 26 to mark the culmination of rehab work and the installation of a new “peace garden” around the base of the 26-foot tall monument.

The ceremony will mark the end of a six-year-long struggle to assure that the monument, a series of chains wrapped around a fiberglass structure in the shape of a nuclear mushroom cloud, is preserved.

“Chain Reaction” was originally installed in 1991 with a $250,000 then-anonymous gift, but in 2011, city staff expressed concerns that the monument, located along Main Street between the Civic Auditorium and the Santa Monica courthouse, had become structurally unsound.

A battle ensued between activists who claimed that city officials were exaggerating the degree to which the sculpture’s structural integrity had degraded and the estimated costs to study and repair the structure. Estimates ranged from about $100,000 to nearly $500,000.

In 2012, the Landmarks Commission voted unanimously to designate the sculpture a historic landmark.

Activists managed to raise more than $100,000 to help pay for testing and rehabilitation of the structure and in 2014, the Santa Monica City Council voted 6-to-1 to commit additional public money to preserve the monument.

On June 26, according to a press release put out by ubiquitous Santa Monica activist Jerry Rubin, who was a vocal supporter of preserving the monument, Santa Monica Mayor Ted Winterer will be joined by commissioners and former mayors to celebrate the activists that helped lead the fight to preserve the monument.