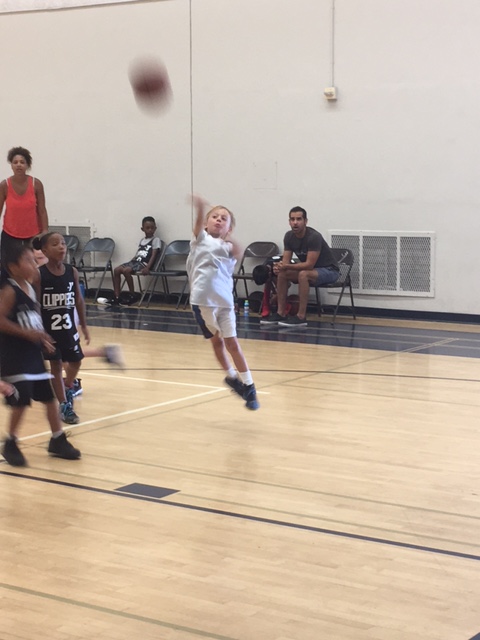 For the third straight week, the four Santa Monica Stars teams managed a fine 3-1 record against outside competition, but now only one team, the 6-7 group, remains undefeated and in sole possession of first place in its division at the Culver Palms YMCA summer league.

That team rolled to an easy 32-10 victory in the first game of the day, as Kellen McDonough poured in ten points, Alex Brick added 6 more to go with a game-high 11 rebounds and the defense was forced to back off for the entire second half.

They out-rebounded their opponent 45-14 and had a 14-5 advantage in steals by virtue of a tough and aggressive man-to-man effort for the first half. Furthermore, coach Eric McDonough and his staff have been emphasizing that players learn to use the left hand for dribbling and go to the left side of the court, instead of always going down to the right corner. This strategy of using both sides of the court creates opportunities to score many points in the game.

Asher Zaczepinski had a great all around game with great hustle and a couple of baskets and assists. Ben Steelman had his first basket of the season and snagged 6 rebounds

There appears to be only one team capable of giving this group a run for their money and they will meet two more times including the next time on August 19. — Paul Drew contributed to this story

The 12-14 Stars found their hands full of a well oiled travel ball club team from Westchester, and already suffering from the loss of guard Sammy Kohn (sprained ankle) did not have an answer for the long range shooting (9-18 three point shots) and overall team speed of the veteran opponent.

Never giving an inch throughout was a good sign and inspiring to watch, but victory was not to be on this evening. Drew Gelfand, Nicki Reiterer and Zion Qurtman had the best games overall to this reporter, and they are all big men. The ball handlers had a tough outing against the trapping pressure of the Westchester squad.

Those parents who attended the 8-9 Stars game on Saturday, August 5 witnessed what will surely go down as an instant classic.

Who could have known that Culver Team 1, to whom our Stars lost a heartbreaker 18-17 last Saturday, was the same as Culver Team 5, against whom we were matched this week?  Culver 5 featured the same standout point/center/forward who nailed a buzzer beater against us the previous week. But this time our kids were up to the challenge.

From the opening tip the Stars showed they were committed on the defensive end and jumped out to a 4-0 lead at the end of the first quarter on two baskets by Adi Petros, who led the team in scoring with 6 points on the game.

As the official scorer I truly had trouble keeping up with the steals, blocks, countless jump ball tie ups and other hustle plays. Jake, Dom, Nathan, Hunter, and Clark were very active on defense while Donovan and Isaac pounded the boards.

Culver made some successful adjustments. Most notably, switching to man-to-man, which created big problems for our guards and resulted in a scoreless second quarter for Samo and a tie game at half.

In the third quarter Samo took control after two baskets by Donovan Blackwin. In the fourth, a breakaway lay up by Nathan Kashper put The Stars up 12-7, but Culver came roaring back. The Stars once again had big problems dealing with the full court press in the final minutes and their nemesis, the Josh Jackson look alike (hairdo and all), seemed on the verge of another miracle when he scored in the final minute to pull Culver within one and, after a steal, drew a foul and stepped to the line for a one and one with 17 seconds remaining in the game.

However, the free throw did not fall and even though the ball ended up in the Culver Stars’ hands once again in the final seconds, this time he was swarmed by Samo defenders and was unable to get a good shot.

Samo fans, coaches, and players rushed the court in celebration as the final buzzer sounded (well maybe not the fans).

In this reporter’s humble opinion, the Stars deserved the victory and survived not only a worthy opponent, but also some very questionable refereeing in the second half of the game. This was a true team effort and all should be proud of the win. Although not visible in the boxscore, Tavio and Emiliano also made good contributions.

I would suggest to single out Isaac Samy as Player of the Game. His tenacity, grit and determination were invaluable.

Kudos to our coaches, Andrew Waters and Dave Ronn, who filled in admirably and kept our boys focused throughout the game. And finally a shout out to Travis Waters who was unable to play due to an injured right knee, but still joined the team on the bench and cheered with great vigor throughout the game. — submitted by Eugene Kashper

After a strong offensive performance a week before, the 10-11 team followed that up with a most-of-the-game struggle to make just about any shot.  Thanks, however, to a strong defense, the team was up 3-0 after one quarter as Quest Miller scored two of his four points and worked hard on the glass.

The team picked it up a bit in the second behind Xailoh Hermosillo who made two of his game high 7 points in the period, and Tyler Strang’s two baskets.  Shawn Sikder played well in this quarter in particular. Khaelan Zeitlin and Cy Backen added baskets as the team opened a double-digit lead by half time.

In the third, and for most of the fourth, quarter the team was cold, scoring only three free throws until quite late in the contest before Timosha Moncher broke open a 22-20 game with a basket and Hermosillo added a banked in three point shot to put things away.

The team clearly falters when faced with the need to delay with a lead and time running out, rather than tossing up wild shots like they did, it might be better to control the ball and take some time off of the clock. — submitted by Rick Moncher

Any who wish to submit stories and photos can get a byline in THE HOOP that week.

A reminder from the league office to pay all fees owed immediately. And of course, all players and spectators should be on their best behavior at all games.

Registration for all returning families from Spring league for the upcoming Fall season continues by hard copy only until open registration begins for the general public on August 9. At that time you may register on line as well at ymcasm.org.