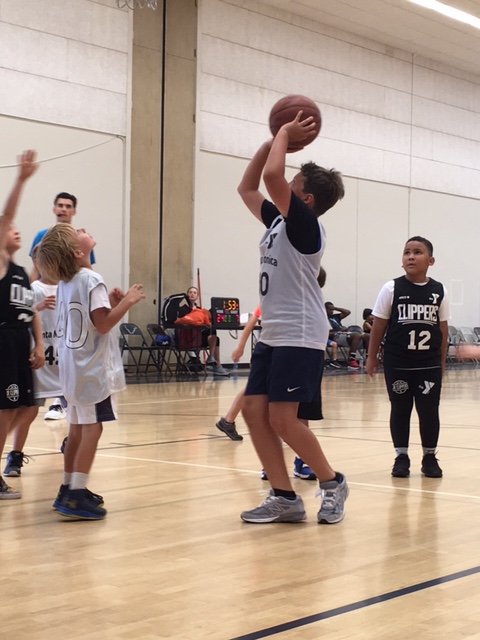 After several weeks of 3-1 results, the four Santa Monica YMCA summer league teams could only manage a split last weekend, one that saw two teams drop further out of championship contention. One squad, however, the 6-7 year-old team, is very close to clinching a league championship as they stayed undefeated with another big victory.

All four teams have picture day this Saturday at Culver Middle School, along with mid-season games.

The 6-7 team faces its closest (and only) competitor in the four-team league this week at Culver Middle School, and a win would just about seal the league championship for it would give them a two game lead with but four to play and the tie-breaker if things were to go horribly wrong, meaning they’d have to lose 3 of their last 4 to fall out of first place.

This after posting another convincing win over Culver Palms #3, 34-7. It was a well played first quarter by both teams, with Culver getting off many good looking shots and hitting several including a rare three point make.

Samo led 8-7 after one. Then, reality set in, as the Santa Monicans did not allow another point for the game’s final three periods, and won going away.

Kellen McDonough dropped in 12 points to lead the way, and Alex Brick, after conferring with the Shot Doctor between quarters, added 8 more for the unbeaten Stars (4-0). Brick added 11 rebounds to his league leading total. — Paul Drew contributed to this story

The 8-9 team couldn’t buy a basket and got pushed around by a team from Westchester 23-6. Lots of chances, but no luck on this day, and the team dropped to 2-2 on the season.

The Samo 8-9 Stars faced a highly skilled and physically imposing team at the Westchester Y this past weekend.

From the opening tip our opponents brought a level of energy and aggression that Samo could not match, jumping out to an 8-0 lead after the first quarter. There were some elbows and some pushing and shoving in the paint that many of our guys were not prepared for.

In both the first and second quarter Samo had a number of good looks at the basket but were unable to get anything to fall – several shots miraculously rolled off an unfriendly rim.

Julian Haggart, Jake Ronn, Isaac Samy and Donovan Blackwin were active on both ends of the floor.

In the second half, Samo got on the scoreboard on a short putback jumper by Haggart, followed by a smooth drive and foul line jump shot from Ronn.

Asser Tewodros battled amongst the trees for an offensive rebound and strong follow to cut the deficit to 14-6 and create a bit of excitement in the stands.

But our opponents quickly responded with a three point play to end the quarter and we opened the 4th with Samo down 17-6. In the final stanza, the team played with more energy but was once again unable to score. More aggression on offense through better movement and screening would serve the team well and there were several defensive breakdowns in the game.

Coaches Steve Sone and Dave Ronn worked hard, urging the boys to show greater fire at both ends and not to hang their heads when things don’t go as planned, taking full advantage of the teaching moment after the game. — Submitted by E. Kashper

The 10-11’s were beaten for the second time in four outings this summer, losing to another very tall and well-oiled team from Westchester. They looked way too organized to be your standard summer Y team (such as Culver City has). Our team is on the small side, with the emphasis on speed, but this Westchester squad were a much smarter and better “team” overall.

After Nifty Tewodros and Timosha Moncher scored 3 in the first quarter, our 10-11 team had a 6-0 lead. The boys were feeling confident until a 16-3 Westchester run throughout the second quarter that was broken up only by a 3 from Shiva McIntosh; who was our best performer on this day in a 31-18 loss. We had far too many turnovers in trying to throw over the taller defenders instead of faking high and then passing under and around them. Although the boys are trying their best, the lack of rebounding tenacity under the basket continues to be a weakness for us.

Better days ahead for the Samo team! — Submitted by Rick Moncher

Samo got down early again as the other team had very quick guards and some decent shooters but not a ton of size. The locals then switched to a zone with about five minutes left in the first half and found themselves up by two at the half. Samo broke the game open big time in the second half.

The bigs were better rebounding and the team defense was aggressive in the zone, which created many turnovers. They made generally good decisions on offense. They didn’t hit a lot of our threes or else the margin would have been bigger. Afterward, most of the players wanted to talk about what they could improve upon, which is always a good sign.

The scoring was pretty distributed, the leaders being Nicki, Sammy (including two threes), and Nasir hit a few buckets, etc. Samo hit more outside shots than in prior games, but definitely got their share closer to the basket as well.

Andrew did well — he played big, stayed close to the basket gathering rebounds. The only nits were that he missed a few baskets from point blank range (mostly because he couldn’t absorb the opponent contact and simply overpowered the ball) and he dropped a few passes from Sam. Interestingly, after the game the kids really seemed to want to talk about areas where they could improve and Andrew took it upon himself to say he felt he mishandled a number of passes and that he wanted to work on it. Also, no three point attempts from the bigs!

Kohn, coming off a bad ankle, continued his standout play. He made some really crafty passes to teammates on drives to the basket, but he also definitely took more shots this game, with a very good shooting percentage.

The team shot selection was generally quite good. There were several moments when players tried to do too much, and that usually does not end well, which was the case in most cases of this kind. In each instance, the players knew they had done the wrong thing and owned it immediately—good learning is going on.

Dash Decker was cold from the outside but had a fine drive after a fake that resulted in a sweet little five footer.

The switch to zone with five minutes to go in the first half was really the turning point in the game. They had two guards who were small but exceptionally quick, so they got down the lane with regularity in the first 15 minutes. But once Samo went zone, they probably cut their drives down 75 percent. They had some decent three point shooters, but their percentage fell off as the game went on and they just couldn’t get inside as much as they had at the start. One thing that we did very well was rotate while in our “zone”. I’m not sure why, but we just started trapping on the sidelines — when the other team passed out of it, they were generally able to recover.

The rebounding which was good in a blowout loss last week, was even better, but the other team did not have the size that the prior team did, so it was hard to tell how much of it was due to Samo being more vigilant or just going up against a weaker opponent. They also had only 7 players, and perhaps got worn out as the game went on.

Finally, the team morale was very good. We were down seven or nine points in the first half and nobody panicked or pointed fingers, they just kept working at it and cut into the lead. The next thing you knew, they were up two at halftime and then rolled from there. –Jim Fleigner contributed to this story

Any who wish to submit stories and photos can get a by line in THE HOOP that week.

All players and spectators should be on their best behavior at all games.

Registration for all returning families from Spring league for the upcoming Fall season continues in person or online at ymcasm.org. At press time of this issue, the enrollment figure stands at nearly 190, with capacity at 300.