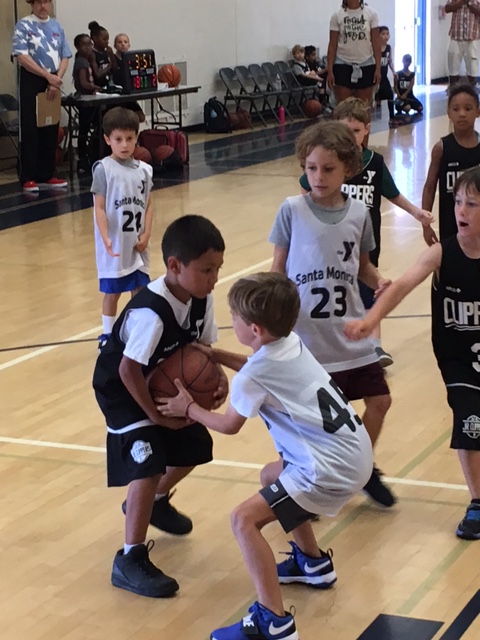 The Santa Monica YMCA’s four league entrants found it tougher than usual sledding this past weekend, as only two of the four teams could find the win column, but one of those, the youngest of the bunch, wrapped up at least a tie for the league championship and kept alive its hopes for a perfect summer season.

Fall league registration continues with only about 40 spots remaining for hopeful ballers, with teams being selected and practice starting in less than two weeks.

The 6-7 year old Santa Monica YMCA basketball team locked up at least a tie for the championship with an overwhelming performance with a defense that completely stifled their opponent, Culver team #1. The Stars jumped out to a first quarter lead of 12-2, and went into cruise control after that, winning 34-2.

Birthday boy Kellen McDonough was on fire with a dozen points, and in complete command on the floor. The Stars brought thirteen players who all made the stat sheet. The defense was so overwhelming that it even caused an opposing player to put in a basket for the Stars. All players showed an improved ability to use both hands for dribbling and protecting the ball, and having greater court awareness by exposing all sides of the court, and communicating on defense. The only question left for the Stars is, can they go undefeated? We will have that answer in the next few weeks.

The 10-11’s team made their second visit to the Crenshaw YMCA this week, but the result was another sound defeat. They did play better this time, but the much larger size of Crenshaw, as well as their excellent skill level, was too much to overcome. Even though Samo seemed to be playing well, they quickly fell behind 9-0 and never really threatened them. As has been the main problem all summer, we got crushed on the boards. We would get 1 shot per possession and they would get 2-3 or more. No matter how much work on making bounce passes, Samo continued to try to throw passes over the taller defenders; leading to far too many turnovers to make the game competitive.

Quest Miller and Tyler Strang hit buckets and were tireless trying to combat the bigger players from Crenshaw in the paint. Evan Daghighian​ hit two 3’s and Odin Williams and Timosha Moncher each hit a shot. The boys gave a solid effort and never gave up; which should bode well in our last two games of the season — Submitted by Rick Moncher

After the 8-9’s big victory last week that showed tremendous growth in character, it was a very lackluster performance by the Stars this week. Always tough to find a good flow and rhythm when suiting up 15 players, but they didn’t seem to have any energy or fight in this weekend’s 16-5 loss.

Easy baskets and free throws always help with a teams confidence in the early stages but they missed a couple open layups off of great passes and ended the game 1-6 from the charity stripe.

Adi Petros provided an offensive highlight with a sweet turnaround jumper off glass. Our big 3 of Jake Ronn, Donovan Blackwin and Dom  Kajota hustled and played solid all around games in the losing effort. — submitted by Steve Sone

The 12-14’s sixth game of the season was truly another team victory for the 11-14 Stars. Despite trailing by ten at halftime and being behind for the vast majority of the game, the team stuck together, made multiple defensive adjustments and ended up controlling the last three minutes of the game to earn a 38-31 win. Fourteen team members played tonight and by the end the Stars’ depth wore down its opponent.

Samo’s players did a lot of things right tonight, among them seamlessly transitioning the defense from man-to-man to zone and then implementing a full court press that gave the other team fits for the final ten minutes of the game. Numerous steals, constant hustle, relentless effort and highly effective teamwork secured this one. Special acknowledgments to Aron Zakharin, who played in his very first game with generally strong perimeter defense and timely scoring, Preston Calder, who was an absolute terror creating multiple steals and deflections in the second half, Nicki Reiterer, who continued to get timely buckets despite absorbing heavy contact in the paint, and Kasra Sariri, who seemingly outworked every other player on the floor for multiple rebounds and loose balls.

With a record of 5-1 and two games remaining in our season, the team still has several things to work on to reach its fullest potential, including reducing turnovers, converting on shots close to the basket, finishing strong, making free throws and learning how to stay aggressive without getting overly frantic in our decision-making. This was a very good win and a game that they can continue to learn from. — submitted by Jim Fleigner