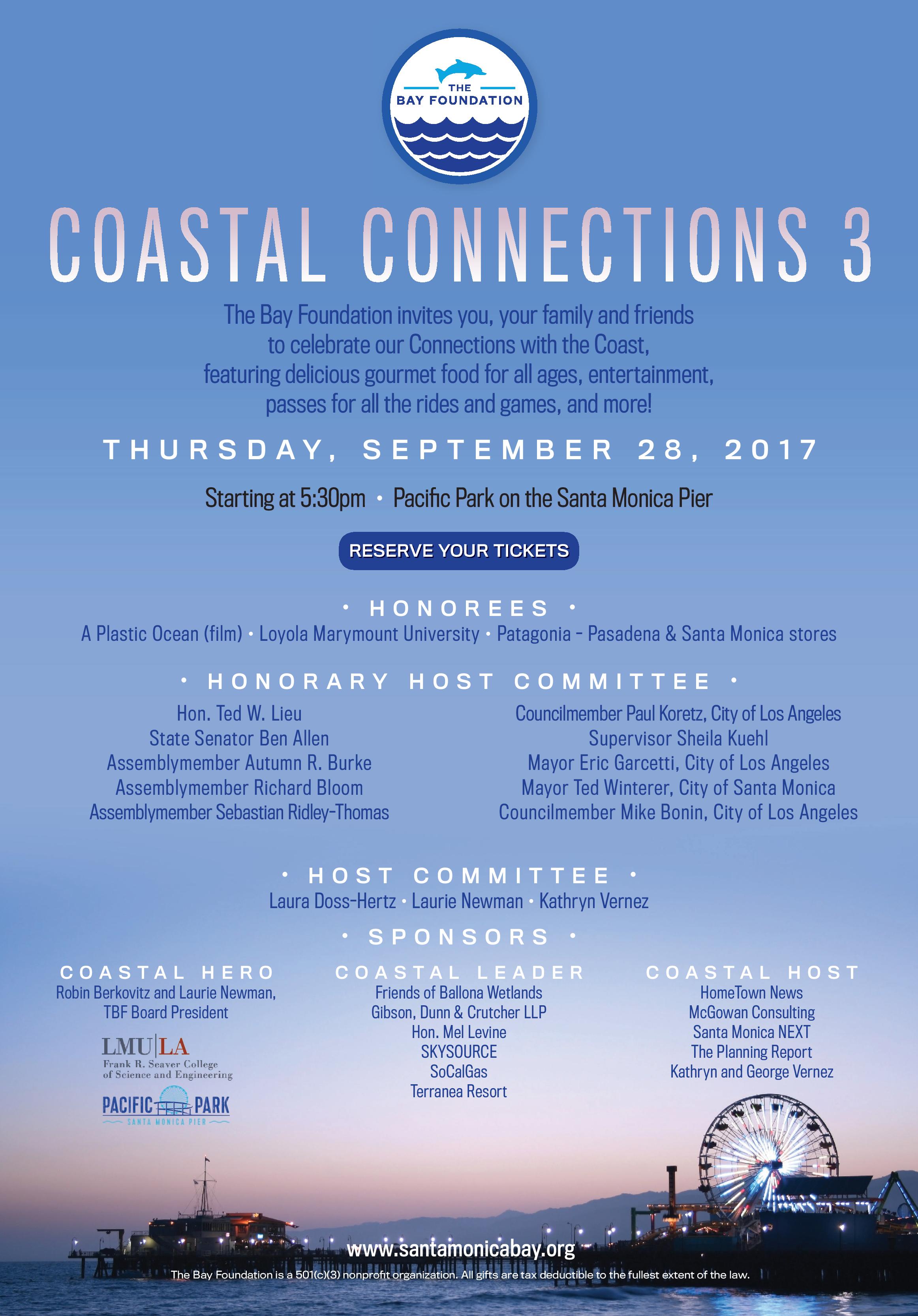 Via Bay Foundation press release. Santa Monica Next is a “Coastal Host” sponsor of this event.

On Thursday, September 28, from 5:30 p.m. – 8:30 p.m., The Bay Foundation (TBF) will host its Third Annual Coastal Connections fundraiser at a customized venue in Pacific Park on the Santa Monica Pier. The family friendly event will celebrate everyone’s connections with the coast, featuring a 360-degree virtual reality experience of the Santa Monica Beach Restoration Project and exploration with TBF’s new automated submarine R2Deep2 (on hand).

The event will include a delicious buffet and bar, sketch artists, passes for all the rides and games, and more! Tickets are on sale now, please visit santamonicabay.org or click here.

TBF will be recognizing these special honorees:

“Since 1909 the Santa Monica Pier has supported millions of us. It allows us to walk above the waves, enjoying the sunshine, ocean air, and the laughter of friends and family.  Similarly, The Bay Foundation supports millions of us as we work to restore life and resilience to our coast, protect public health and explore,” states TBF Executive Director Tom Ford. “Our honorees have been selected based on their impressive and ongoing dedication to coastal environmental issues through the arts, academic research, and positive commerce. We think you’ll be inspired and we welcome your support. Please bring your family and friends to the pier on October 28 to find out more, experience us, and have a great time making new connections to the people and coast that make LA our home.”

Since its release at the end of 2016, “A Plastic Ocean” film has been screened in over 60 countries and 6 continents, and has been called “The most important film of our time” by Sir David Attenborough. Filmed with beautiful and chilling detail in 20 locations worldwide, “A Plastic Ocean” shows the consequences of our global disposable lifestyle (i.e. worldwide, we use an estimated 1 trillion plastic bags each year – nearly 2 million a minute – with the use time of a typical bag just 12 minutes). The film’s hosts investigate how our addiction to plastic is impacting the food chain, how that is affecting each of us through new and developing human health problems, and introduce us to workable technology and policy solutions that could begin to address the issue.The Frank R. Seaver College of Science and Engineering at LMU and TBF established the Center for Santa Monica Bay Studies to engage in multidisciplinary research on environmental and social issues affecting Santa Monica Bay and its watersheds and to contribute to policies and actions that improve the environmental condition of the Bay. This successful partnership has produced research studies, student internships, annual symposiums and Urban Coast journals. Over 2,000 people have participated in the Center completing over 18,500 hours across all the projects. Undergraduate and graduate students completed 70 units of credit from 60 distinct Universities (from the US and internationally).

Located across town from each other, the Santa Monica and Pasadena Patagonia storeshave supported TBF’s mission through different programs. The Santa Monica store continues to provide staff, two at a time, volunteering hundreds of hours to restore LAX Dunes, the largest of their kind in southern California. The Pasadena store has provided grants to TBF’s Clean Bay Certified program, which works with restaurants on additional pollution prevention practices beyond the stormwater permit requirements these restaurants have already committed to.

“We are so happy to be honored by The Bay Foundation because we have so much respect for the mission and all of the hard work that they are dedicated to,” says Kara McNally, Floor Lead, Patagonia Santa Monica. “We are excited to be doing field work because it is a huge job and without the help of volunteers the work cannot get done. We are so happy to get our hands dirty to help preserve land that is right in our backyard.”