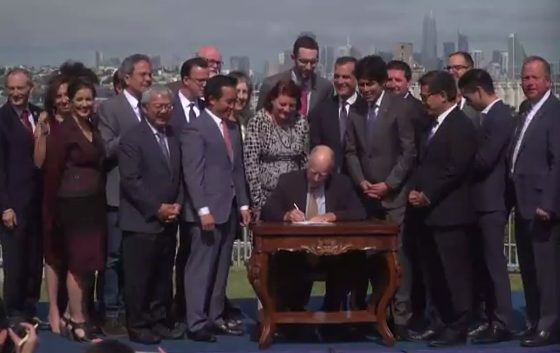 Backed by yet another beautiful perspective of San Francisco in the distance—this time from Hunters View, an affordable housing project south of downtown—Governor Jerry Brown signed into law a package of fifteen bills that will lay the groundwork for increasing housing, affordable housing, and homeless services in California.

A parade of politicians, including mayors (San Francisco’s Ed Lee, Oakland’s Libby Schaff, Los Angeles’s Eric Garcetti) and legislators who authored and advocated for the bills, were on hand to give lightning-fast speeches about the housing crisis and how some of these bills will begin to help solve it.

Begin is the operative word. Speaker after speaker reminded the crowd that, although “this is a brave step for the entire state” (Garcetti), and a “necessary first step” (Senator Tony Atkins, D-San Diego), “we are not done with this work.” (Schaff)

“Millions of Californians are faced with unbearable costs of housing, forced to make stressful financial decisions just to keep eviction notices off their front door,” said Assemblymember Richard Bloom (D-Santa Monica). “To those who are suffering: We hear you,” he added. “We are committed to making housing affordable again so those who are part of the fabric of our communities can again live in our communities.”

Senator Jim Beall (D-Campbell) was one of several speakers who gave a shout out to legislative staff and advocates who worked for over two years to get the bills passed. “They did all the hard work,” he said, “and we get the glory.”

He spoke of his inspiration: “The spark that caused the fire that burned my house down when I was fourteen, and left the family of twelve homeless—out of that tragedy came my resolve to dedicate my life to public service, and to provide housing to all people without making judgements about the situation they were in,” he said.

“Real housing is a right in our community.”

With this bill package, said Senator Scott Wiener (D-San Francisco), “California begins a pivot from a housing-last policy to a housing-first policy, where housing matters. We have been digging ourselves a bigger and bigger hole by putting obstacle after obstacle in the way of building new housing, and people are being pushed out into the streets, and our economy has been held back. And we are undermining our own climate goals by pushing people into punishing commutes.”

“We need to keep going and have the consistency, fortitude, and political will to keep pushing,” he added. “I have some bills for you next year.”

Governor Brown joked about the excited crowd of advocates and staff in attendance. “What a turnout,” he said. “This is probably the biggest bill signing I’ve ever seen—because it deals with something as basic as shelter.”

But, he reminded the legislative authors of the bills, the rules that are seen as obstacles to building housing had been passed “by people like you” for good reasons. “We want to achieve safety, aesthetics, the right kind of neighborhoods, all of that,” he said, “but now we need to streamline it.”

These fifteen bills are a good beginning, he said, “but have they ended the need for more legislation? Unfortunately not.”

But, he requested, “Not so many bills next year, guys.”

The bills signed by the governor today are:

The full text of each bill is available online here.