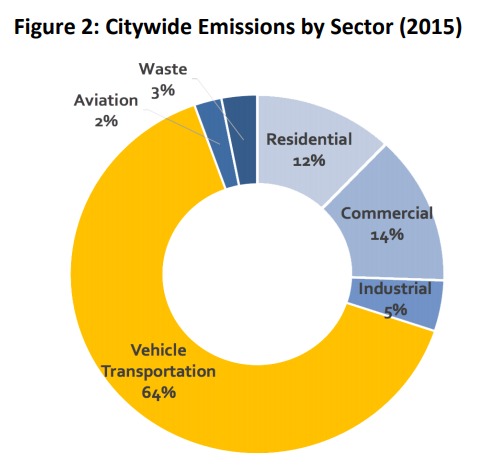 Santa Monica residents will have about three weeks to weigh in on the city’s new draft Electric Vehicle Action Plan.

The plan is a hundred page document that outlines policies and infrastructure goals to accommodate — and encourage — the increasing number of electric vehicles (EVs) on Santa Monica streets. It is part of the city’s ambitious sustainability goals that aim to significantly reduce the Santa Monica’s carbon footprint.

“With 64 [percent] of Santa Monica’s carbon footprint produced from the transportation sector, vehicle electrification is essential to significant carbon reductions,” the plan reads. “This will require an investment in charging infrastructure and policies to support the transition. The City can be a catalyst to increase EV use and can provide the essential components to reach those efforts.”

The underlying assumption of the plan is that by increasing the availability of both public and private charging stations, the city would encourage those who have put off making the switch to electric vehicles to finally do so.

Specifically the plan aims to increase the number of public charging station from 75 to 300 in the next five years and to increase electric vehicle ownership from three percent to 15 percent by 2025.

EVs are important, but the plan acknowledges that electric vehicle ownership is not among the most effective ways to reduce carbon emissions.

Walking and biking are the most effective ways of reducing one’s carbon footprint. To encourage more walking and biking in Santa Monica, the city created its Bicycle Action Plan and a Pedestrian Action Plan. While the city has officially committed to a “Vision Zero” strategy, implementation of that effort has been slow at best.

The other thorny issue that remains an obstacle to Santa Monica reducing the city’s overall carbon footprint is a seemingly institutionalized aversion to density.

While Santa Monica took the long-overdue step of removing parking minimums in the most recent update of the city’s Downtown Community Plan, officials also effectively downzoned much of the downtown, at least when compared to the 1984 Downtown Plan. But denser neighborhoods with a mix of uses, especially in an area as transit rich as Downtown Santa Monica, are one of the most effective ways of reducing carbon footprints.

Still, Santa Monica’s residential population has remained relatively stagnant, increasing from about 88,000 in 1980 to about 93,000 today. The city’s consistent slow-to-no-growth policies over the years have not only led to runaway housing costs but are also undermining its sustainability efforts.

If there aren’t policies in place to meaningfully increase density — and therefore allow more people to live in the city — then most of the sustainability efforts would only benefit the lucky few who can afford to live in the city. The Vox.com article reads:

“THE WEALTHY OF SANTA MONICA, BY LIVING IN A PLACE WITH STRONG ENVIRONMENTAL LAWS AND STANDARDS, WILL AVAIL THEMSELVES OF A LOW-CARBON LIFESTYLE. THEY WILL LIVE IN LOW-CARBON HOUSES, DRIVE LOW-CARBON CARS, AND PATRONIZE LOW-CARBON LOCAL BUSINESSES. THE PER-CAPITA CARBON EMISSIONS OF THOSE LUCKY RESIDENTS WILL BE LOW COMPARED TO OTHERS IN THEIR SOCIOECONOMIC COHORT.

“BUT AS JOB GROWTH CONTINUES, PEOPLE WILL KEEP COMING TO THE CITY. THAT’S PART OF WHAT KEEPS A CITY VITAL — PEOPLE KEEP COMING. IF THOSE PEOPLE CAN’T AFFORD A PLACE TO LIVE IN THE CITY, THEY WILL BE PUSHED TO THE PERIPHERY AND BEYOND, TO SPRAWLING SUBURBS.”

To weigh in on the proposed EV Action Plan, visit smgov.net.