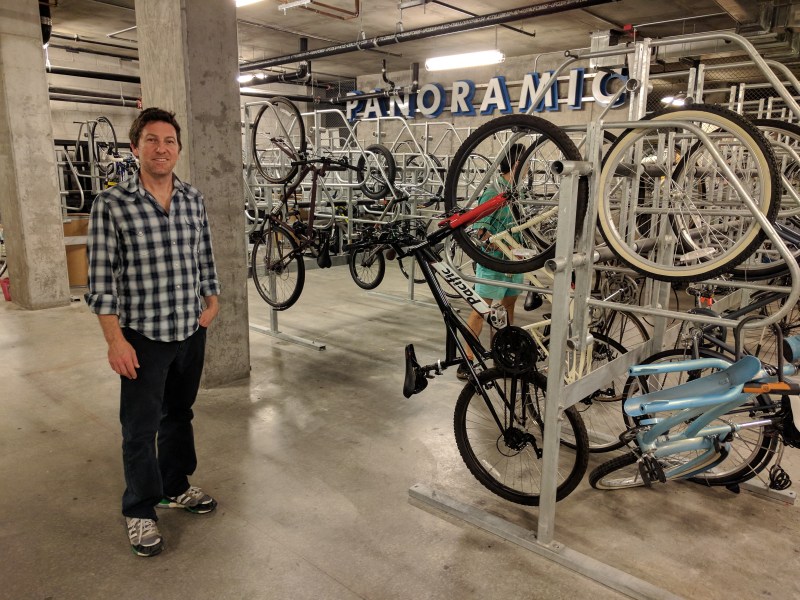 Install wall-mounted bike racks that protrude too far from the wall in the wrong way, and a blind person might walk into a bike. That was just one of many factors to consider when figuring out what kind of bike rack to use and how and where to install it, explained Peter Lemieux, who does sales for Dero, a company that designs and builds bike racks.

To prevent that from happening (and to stay within the requirements of the Americans with Disabilities Act), “You can build [the rack] over a platform, or build a winged wall,” either of which would warn a person who is navigating with a cane that there is something in the way.

Lemieux explained many of the other ins-and-outs of bike parking at a presentation today given at the San Francisco Bicycle Coalition’s office on Market Street. The presentation, which was also sponsored by the American Institute of Architects, covered everything from construction materials to marketing.

Bike parking, he said, is generally divided into two categories: long term and short term. “Short term should be close to the main entrance, where someone is parking their bike for less than two hours,” he said. It should also be in a prominent location, within 50 feet of an entrance, “with good lighting so passing pedestrians can deter theft, although in SF sometimes they steal bikes right in front of people,” he admitted.

That also means adhering to planning guides from the city that lay out where and how closely bike racks can be spaced, so as not to interfere with passing pedestrians traffic. Bike racks, of course, should offer the ability to lock the bike up in two places and should be built out of square tubing which, apparently, is harder to saw through.

There’s also a variety of shapes, sizes, building materials, and finishes, each with relative costs and advantages. Stainless steel, for example, generally looks better but costs more. Bright colors look nice but often leave the rack more susceptible to rust than galvanization, which protects regular steel from the elements.

Meanwhile, San Francisco’s Planning Department, he explained, has a comprehensive guide with measurements–and one that is often referenced and consulted by other American cities.

There are also manuals from other organizations, including the Association of Bicycle and Pedestrian Professionals, which has a guide to download. These guides go into amazing depth about construction details, such as the types of bolts that should be used to connect the rack to the road surface. Use the wrong type of rack bolts and mountings, as Lemieux explained, and the rack can be rocked back and forth until the mounting bolts break free.

One good way to prevent that is to first install a long rail to the concrete sidewalk and then weld or use special tamper-resistant bolts to connect bike racks to the rail. That way, even if the bolts come lose from the concrete or asphalt on the ground, the racks are still connected to the rail and to each other. That type of construction is common with bicycle corrals.

Long-term parking is a different story.

It’s generally offered by office and apartment buildings, and is becoming more of a perk and selling point, up there with gyms, storage areas, and dog washes. Lemieux referenced a New York Times real-estate article that looked at how buildings are scrambling to make secure biking facilities because renters and buyers are demanding it. “It’s a very small expense” for a developer, he explained, but it’s also “a cool amenity for a building.” And, of course, at least some secure bike parking is also required by many city planning codes now.

Lemieux also sees hope in the growing car-share market, because he thinks that will free up car parking spaces in buildings and on city streets, which can then be converted into more bike corrals, racks and enclosures.

The most important thing, however, is to think like a bicyclist–and remember what they are looking for most. “Where will I be able to park? Is it secure? Is it covered? Are the bike racks easy to use? Go through a mental checklist of what will work best,” he said.