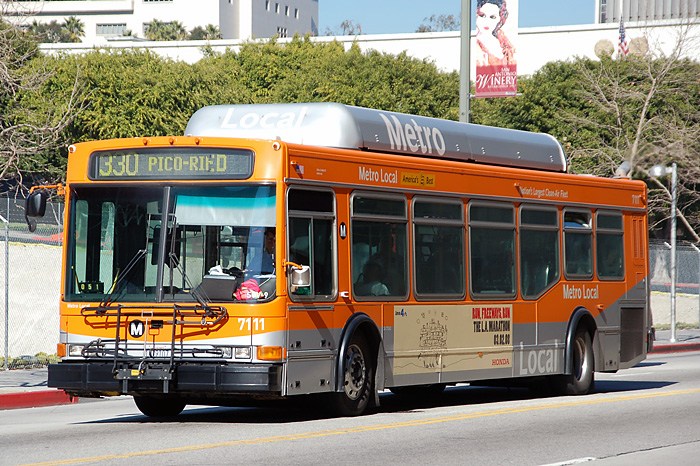 Since 2016, the media has been reporting that Metro ridership is declining. But how bad is the problem and what is causing it? A report out this week takes a hard look at the data. Falling Transit Ridership: California and Southern California was commissioned by the six-county Southern California Association of Governments (SCAG). The 70-page report comes from UCLA Institute for Transportation Studies authors Michael Manville, Brian D. Taylor, and Evelyn Blumenberg.

While the diagnosis is far from conclusive, and nearly no prescriptions are offered, the report attributes the Southern California region’s falling ridership to increases in car ownership, especially among folks who have historically tended to ride transit: low-income immigrants, especially Latinos.

What: Quantifying the Ridership Picture

The report focuses primarily on 2000 through 2015-16. During this period, in per capita terms, Southern California transit ridership was relatively flat until 2007, then began to trend down. In absolute numbers, ridership began trending downward in 2012.

The report makes some comparisons between different California regions. Statewide, the Bay Area sees a higher transit mode share (6 percent) than SCAG (5 percent), though, with more of the state’s population, SCAG is home to more transit trips (52 percent of CA’s transit trips).

From 2000 to 2016, the Bay Area and San Diego area saw modest increases in transit ridership. California ridership was down due to declines in L.A. and Orange Counties.

The researchers found that the larger changes were concentrated among a small group of people and in a small number of places.

The study states that “Metro by itself accounted for a remarkable 72 percent of the state’s losses. Because L.A. Metro’s losses are themselves highly concentrated, a dozen routes from LA Metro account for 38 percent of all the lost ridership in California. Half of California’s total lost ridership is accounted for by 17 L.A. Metro routes (14 bus and 3 rail lines) and one OCTA route.”

Why: Factors Within Transit Operators’ Control

[For Metro] transit service supply has tended to follow, rather than lead, changes in ridership — at least through 2014. Beginning in 2014, bus service rose slightly while boardings plunged. Rail service, not surprisingly, has increased more than 150 percent since 2000, and ridership has increased as well, though more slowly. Both service and patronage have tailed off since 2014, but largely in concert— there is no obvious sign of one leading the other.

[Metro] data offer little evidence that service cuts are driving away customers. Instead service expansion has been accompanied by less ridership, with the main result being lost productivity, particularly for rapidly expanding rail and van services.

Speedwise, SCAG regional buses have slowed over time, likely due to “many factors, including worsening congestion, shifts from faster suburban to slower urban service, shorter stop spacing, and longer stop dwell times to load and unload passengers.” Further “Region-wide bus vehicle speeds declined five percent between 2000 and 2010, and another eight percent between 2010 and 2016, for a total drop in speed of nearly 13 percent over 16 years.” This could be part of a deteriorating spiral, where the slower buses go, the more riders shift to cars (see below), worsening congestion, and causing buses to go even slower.

Reliability and rider experience may influence ridership, but the report’s analysis was less conclusive. While Metro reliability appeared to improve, researchers could not “determine if Metro’s schedule adherence improved because its buses met the existing schedule more often, or because schedules themselves were changed.” Rider experience can be somewhat subjective, influenced by perceptions of safety.

Why: Factors Outside Transit Operators’ Control

The report plots gas prices against transit usage, and finds “falling fuel prices to be a real but probably minor driver in falling transit use.”

There has been speculation that the rise of ride-hail Transportation Network Companies (TNC, ie: Lyft and Uber) may be siphoning off transit ridership. The report asserts that, though evidence is somewhat sparse, TNCs do appear to be a major factor in declining transit ridership. Among the reasons cited are the timing: TNC ridership was minimal until 2012, while per capita transit ridership has declined since 2007.

The authors cite increasing vehicle ownership, especially among lower-income households as a primary cause of decreasing ridership:

This begs a further question of what is causing these higher levels of car ownership. The report cites a number of causes:

Where Does Southern California Transit Go From Here?

The report’s focus is on explaining what has already happened. It does not feature a list of recommendations to fix the problem of declining ridership. It even warns transit agencies that wooing poor riders may not be the best approach:

The advantages of automobile access, which are particularly large for low-income people with limited mobility, suggest that transit agencies should not respond to falling ridership by trying to win back former riders who now travel by auto. A better approach may be to convince the vast majority of people who rarely or never use transit to begin riding occasionally instead of driving. This task is unquestionably more difficult than serving frequent-riding transit dependents, and it would likely require weakening or removing some of the state’s and region’s entrenched subsidies for motor vehicle use.

One key takeaway is that “transit is unlikely to grow substantially, to accomplish its environmental goals, if driving remains artificially inexpensive.” There is a myriad of “entrenched subsides” that shift driver costs to the general public. These include sales taxes and general funds covering road transportation budgets, and parking requirements that bundle parking costs into rent, property, and product costs paid by everyone.

As SBLA has reported, even when Metro is building multi-billion-dollar subways, Metro continues to invest similar multi-billion-dollar amounts in highway widening. This is true under both Measure R and M sales taxes. The current investment builds on top of decades of U.S. transportation spendingthat has, by more than an order of magnitude, heavily favored cars over transit.

The result, according to the study, is: “Much of the region’s built environment is designed to accommodate the presence of private vehicles and to punish their absence. Extensive street and freeway networks link free parking spaces at the origin and destination of most trips. Driving is relatively easy, while moving around by means other than driving is not.”

If public policies heavily subsidize driving, should it come as a surprise that people, including low-income folks and recent immigrants, are choosing to drive?

Metro cannot be expected to stem the broad national tide of pro-car investment, but what can the agency do that is more-or-less within its purview?

Some cities, including Houston and Seattle, have seen ridership gains after reorganizing their bus networks. After setting aside its 2016 bus service reorganization plan, Metro is just getting underway on another similar effort. Last November, the Metro board approved a $1.3 million contract for the Systemwide Bus Network Restructuring Plan. In a press interview, the UCLA ITS authors encouraged Metro that reorganizing bus service is “still worth it,” but offered a caveat that, given the study’s findings of the suburbanization of the SCAG region’s housing and jobs, that the “payoff may not be as high now.” Brian D. Taylor spoke of how, in the past, concentrating frequent bus service on core trunk lines (generally at the expense of outer, more suburban areas) was a proven strategy for increasing ridership. Taylor encouraged Metro to proceed with the effort but did not expect it to be a silver bullet.

Commenting on the study, the NRDC’s Carter Rubin was not shy about recommendations. Rubin asserts that “Metro’s plans to overhaul the bus network are important, but we can’t wait until December 2019 to take action to make the buses more attractive and useful.” Rubin encourages Metro to “be aggressive in their response to the vicious cycle of more traffic leading to slower transit, leading to more people driving instead of taking transit, causing more traffic.” This could include:

Even though some media point to “free-falling” ridership that is in a “slump,” Metro’s bus and rail still deliver more than 1.2 million passenger rides on a typical weekday. The UCLA ITS report quantifies a decline that appears to be spiraling. It is up to Metro leadership to take ridership, and especially the bus system, more seriously. The Metro board can use the new study to create urgency to speed improvements to ensure effective transit service that serves mobility, equity, health, and the future of the region.