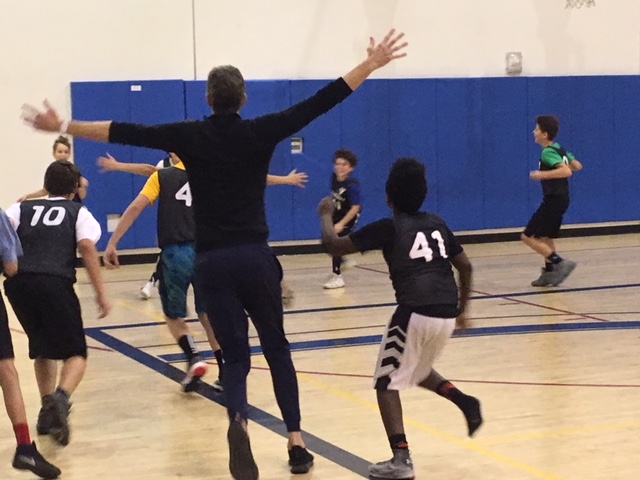 VIKINGS, DRAGONS AND TARHEELS EACH PULL OUT SEASON FINALES

Since the modern era of youth basketball at the Santa Monica YMCA opened in 2011, there have been some 68 seasons of basketball when you add up all of the various division races together. During that time, several teams have gone undefeated through the regular season, only to be dusted of by the League All-Stars in the post-season challenge game.

Two came through with a tie game against the Stars, and now the number has risen to four that have gone on to defeat the All-Star squad, as the Major League Leopards turned the trick last Sunday topping the Stars by a single point, 47-46 in the very last on-court event of the Winter 2018 season.

They become the first team since 2015 to do it, and only the second Major League team to be able to make the claim.

Earlier in the day, three winless teams, the Rookie Vikings, Bantam Dragons and Major Tarheels, all of whom had suffered through 0-9 campaigns, managed to defeat a team of all-stars to ensure that there were no winless teams once again this season, something that has never happened in the modern era of seasons.

Before all of that excitement, there were four regular season games to get through in two divisions.

None of those games were going to be earth shattering in scope, yet the crowds of various sizes, all seemed enthusiastic and energetic.

— In the Bantam League, the “A” tournament third place game went to the Scorpions over the Foxes 20-17, when Marko Zelenovic hit a three point shot with 3.3 seconds left in the game for the victory. Ivan Gatynya scored his first basket of the season in the third quarter, but it wasn’t officially credited to him until after the game when the officials conferred and decided it was good after all.

— In the “B” tournament final, Parker Cappiccille scored 8 to lead the Typhoon to a 26-19 win over the Rockets. Joseph Zak wowed the crowd for the losers with two, three pointers. Aarav Asnani scored his first basket of the season for the Rockets.

— In the Minors “A” consolation game, the Jedi scored a rather miraculous comeback win over the Zips 29-27. It looked like a Zips afternoon as they led by 10 in the fourth quarter. The lead had been cut to 6 before back-to-back-to-back baskets by Asser Tewodros, Coral Izen (7 rebounds/5 steals) and London Coleman (11 rebounds) tied it with 2:36 remaining.

The Zips called time out to try and slow down the Jedi, but they looked like Maryland-Baltimore County to the Zips Virginia. Coming out of the timeout, Jedi coach Jeremy Langer shouted to his team “use the force”, and they didn’t miss after that. Tewodros split two defenders for a leading layup with 1:29 to go and the Zips got tight, firing up all manner of wild shots. Tewodros grabbed a loosed ball and went the distance to put it away at 29-25. The Zips had a chance in post-game free throws, but made only 2-8.

Tewodros scored 10 to lead both team. Hunter Esposito-Doi had 9 early on for the Zips, and Shawn Sikder and Dominic Boccella added 6 each. For Boccella, rack up another 15 rebounds.

— In the final regular season game overall, the Rush doubled up on the Thunder for the “B” title, 30-15.

Jake Ronn was the player of the game scoring 11. Emi Slesaransky and Sasha Yansen were able contributors in victory. Owen Boelke scored his first bucket of the season for the Rush.

— The Vikings waited a long time for this one, and beat the Rookie “B” Stars 22-4, posting a shutout through three quarters. Lara Masood had a career high 6 points and Mile Boelke scored 3 with 6 steals. Jenson Montague was all over the place in the win, with 6 steals and 3 blocks. He also scored two baskets.

Brandon Israels and Ethan Pages were the only scorers for the all-stars.

— The Dragons got 8 points each from Jake Kazerani and Kayra Sanar in topping the Bantam “B” Stars 22-12.

Tyler Evans scored his first career basket for the All-Stars.

— The Tarheels played their best game of the season in topping the Major “B’s, 41-23. Evan Daghighian was unconscious (in that good way) scoring 19 for the victors. Bruno Picazo added 9 and Ari Potamianos dominated the glass with 18 rebounds as the Heels had the advantage there 49-30.

Nathan Desalegne had 8 rebounds, a career high, in the loss.  Griffinn Pine scored 9.

GAME OF THE WEEK

This one had the intrigue of seeing if a regular season team could beat the collective all-stars of the league, and of being the very last game of the season. It was well worth the wait for what was the biggest crowd for any game all season: 68.

The Leopards, as you know from the 24-point banner headline above, scored the one point win. Here’s how it came down.

It started looking like it might be a Leopards night when Nathan Petros, not normally counted on for too much scoring, made the first shot of the game on the very first possession.

When the first half horn sounded, it was tied at 14, but the Leopards went on to hit 6 of 10 free throws to take a 6-point lead.

Dash Wasson brought his team from behind with back-to-back baskets leading into the third quarter sub break. It was 28-23 Leopards with 12 minutes left.

Theone Green, another somewhat unsung hero of this mighty squad scored from the left baseline to make it 32-25.

The last minute of the third quarter was such a mad scramble that it was generally impossible to write down all that occurred. I can tell you that the All-stars press came to life, and forced multiple turnovers, turning them into multiple points and getting the Stars back into a tie for the lead at 34-34 with one quarter ahead of them. Much of the damage was done my Gaspar Antal and Josh Kaplan.

Yet another big shot was made by Jack Simon to open the fourth and give the Leopards the lead right back. Wasson dribble drive layup gave them a four point cushion, if only briefly.

Sam Rubin tossed in a three pointer to trim the lead to one, and when Antal kept shooting and missing, his rebound numbers went up by five (he finished with a dozen) stopping only when he finally made an inside shot to give the All-Stars the lead 39-38 with 3:30 left.

Green’s steal led to a layup miss, but Matt Golubitsky (10 point/11 rebound double-double) was on the scene to follow it in with good hustle and the Leopards were back on top 40-39 at the 2:13 mark.

Antal’s layup put the Stars ahead 41-40, and Kaplan made a shot late in the game to push the Stars lead to 3 before post-game free throws came into play. The Stars had 7, the Leopards 10. It was still anybody’s game.

For those not in the know, we then have the players shoot them, one player at a time, alone on the free throw line. There’s no hollering allowed like you might find in a high school or college or pro game, we use good sportsmanship and let the shooter try alone with their thoughts.

Jaden Fishman stepped up for the Leopards final four attempts.  He missed the first, making the ball feel all that much heavier. Then he made it. And made it. And made it. Leoaprds 47, Stars 45. Last shooter for the Stars hit his first to make it a one-point game. Second one not that close. One to go.

Of the rim, backboard, back rim, front rim ….and…..off, setting off a wild celebration as the Leopards realized what they had accomplished.

To add to the glory of the moment, they all went into the basketball office to see their team picture pinned right there among the greatest team in the modern era on the “Wall of Champions”. AND, of no teams equal their feat come the Spring season, they will have earned the honor to return and be applauded at the year-end banquet in June as “Team of the Year.” But they’ll have to wait and see ‘bout that.