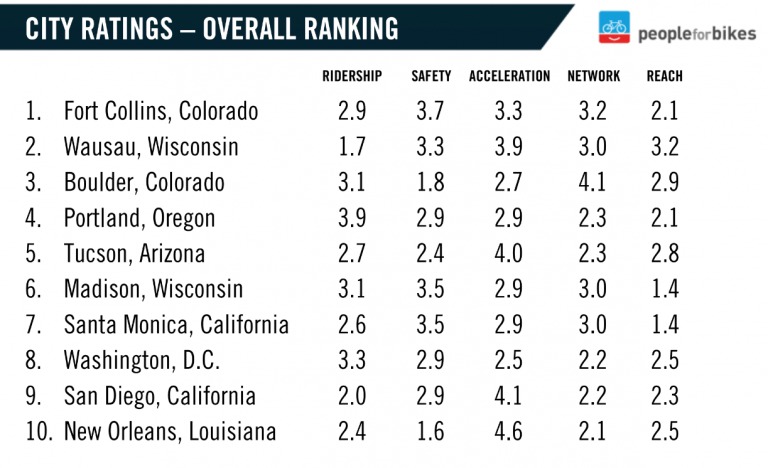 People for Bikes’ released its annual list of Bike Friendly Cities last week, and no surprise: the City of Santa Monica was near the top of the list. Santa Monica ranked #7 nationwide, #1 for any city in California and #2, behind Wasau Wisconsin, for small cities.

Santa Monica’s high ranking should come as no surprise. Santa Monica has made strides in being a bicycle friendly city boasting a functional bike share system, Bike Center, a network of bicycle lanes that provides a mostly functional network and even a bike campus for safety classes.

At Streetsblog, Angie Schmitt breaks down how People for Bikes ranked cities. After noting that recent improvements weighted more than ones “made twenty years ago,” she writes:

The ranking formula also assesses cycling levels by looking at how much people bike within concentric zones emanating from the city center. That helps to control for city size, meaning cities with a large geographic area like Austin won’t be inherently disadvantaged versus cities with tighter boundaries.

However, People for Bikes doesn’t pull punches when noting that few American cities seem to truly understand how to create a network and atmosphere that is truly bike friendly. No city received more than three stars out of a potential five-star rating when compared to the best cities across the world.

“As much as it might hurt not to have any superstars, that’s honest,” PeopleForBikes President Tim Blumenthal told Michael Anderson, their official blogger, in a story announcing the findings.