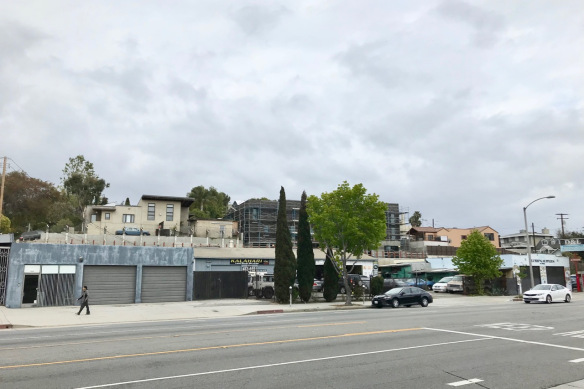 This originally appeared at The Healthy City Local.

It’s been a while since I’ve written about a specific development project in Santa Monica. About a year ago I was busy writing articles about the Downtown Community Plan (DCP), and after that I had my fill of F.A.R.’s and levels of review, etc. I’ve mostly been writing travelogues since then. In the past week, however, two projects, of quite different scale, and located in different parts of the city, caught my eye.

One is a small, apartment complex, only 47 units, with ground-floor retail, on a typically skinny Lincoln Boulevard parcel at Ashland Avenue. The project survived development review last week when City Council members, claiming (accurately) that state law limited their power to block the project, rejected an appeal by neighbors of a Planning Commission approval of the project back in January. (Neighbors Lose Bid to Stop Apartment Complex on Santa Monica’s Lincoln Boulevard).

I live not far from the site and I either drive or walk past it often. It’s a location of classic crudscape, an ugly lot with several decrepit garages that look like they were built with stucco and tin foil.

I remember when City Council, during the hearings on the LUCE, was debating standards for the boulevards. Council members were succumbing to anti-development arguments about “character” (that vague quality that has historically been used to keep apartments and apartment-dwellers out of insular communities). I remember, though, Bobby Shriver, who was sympathetic to the anti’s on other boulevards, admitting that Lincoln Boulevard was pretty ugly and needed new development. Almost ten years later, after another whole planning process for Lincoln Boulevard, a developer is finally building something—an improvement.

For the appeal staff had to prepare a 29-page staff report, which on top of myriad other documents, including a 50-page staff report for the Planning Commission, means that hundreds of pages of reports were created for . . . a 47-unit project that fits within Tier 2 of the applicable zoning. Months and years go by even with a state-law required “project streamlining” and an exemption from environmental review: the application for this little project was filed in March 2016 and “deemed complete” in May 2016. Already two years ago.

I’m shocked that the developers proposed a Tier 2 building. If they had made it a little smaller (a 1.5 F.A.R. instead of the 1.81 it has), it would have qualified under Tier 1, and they could have avoided this review. I’m glad they were brave—if they can make it to the finish line, the site will have another 10 or 15 apartments. (By the way, the development standards still require an insane about of parking—the project will have 151 expensive underground parking spaces for 47 apartments and about 17,000 square feet of retail. On a transit corridor. Crazy.)

Need I mention that the project replaces commercial zoning with residential development? Isn’t that what we want in jobs rich, housing poor, Santa Monica?

As seen in this elevation, the building presents a bold statement on an ugly street. While the ARB and Planning Commissioners (and the anti’s) often complain about bland architecture in Santa Monica, their practice is to screw around with any architects who try to use formal structure and rhythm. They make the same amorphous demands on every project, and then complain that buildings are indistinguishable.

The second project that caught my eye—this one was hard to miss—was the return to the planning process of the Frank Gehry designed hotel project at the corner of Ocean Avenue and Santa Monica Boulevard.

I’m not going to write much about this now—surely there are still years to go on this one and I’ll have more opportunities to write about it later. But as the political class settles down to patting itself on the back about how this project now “fits” the new standards in the DCP, and since the developers have made their peace with the DCP, I’ll be perhaps the one person to talk about what we’ve lost.

Which are 60 condominiums. The new plans are pretty close, in terms of programming, to the old plans, except that 60 condos were sacrificed to make the project fit the new zoning and political standards.

Okay, no one is going to shed a tear for the condos, but let me ask—what was bad about them? In a city of 50,000 housing units, they weren’t going to add to traffic in any measurable way, and they weren’t going to destroy the “character” of anyone’s neighborhood. Yes, rich people were going to buy them, but then we already live in a city where many of the critics of the condos live in houses that are now worth $1,000 per square foot as teardowns.

What the condos would have done is turn thin air into millions of dollars each year of taxes for schools, healthcare, public safety, housing and services for the homeless, etc. Yes, the proverbial bogeymen of Russian oligarchs and Arab sheiks or—Heaven forbid—young Silicon Beach entrepreneurs, might buy some of the condos and only use them a few weeks a year, but others might be bought by elderly Santa Monica homeowners wishing to downsize but stay put.

What was bad about the condos is that they disturbed the false halo of radicalism that the political class in Santa Monica believes crowns their heads. Santa Monicans are mostly on the Left, and so the rhetoric that comes from the most conservative voices in town must use the language of revolution. Oh, those greedy developers! The neighborhood activists and their politicians use words like “community character” and act as if they’re about to storm the barricades of their own privilege, but it’s all about pleasing people who, in the opposite of a progressive agenda, fear change.