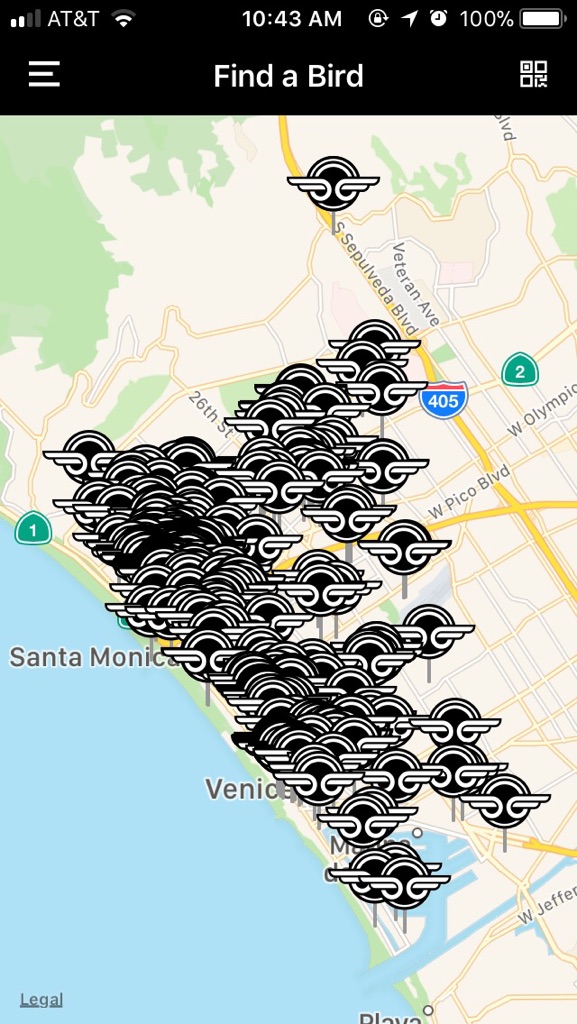 Tonight, the Santa Monica City Council is scheduled to vote on a series of regulations for “dockless electronic scooters” at their regularly scheduled 5:30 City Council meeting (item 7B on this agenda). The meeting is the city’s first attempt to regulate the scooters through  legislation after a high profile ticketing campaign in the winter didn’t produce the expected results.

The city’s proposed regulations (covered in-depth last Friday) would limit each vendor to 500 scooters in the city. Over time, that cap would gradually expand to 750 devices. City staff justify the initial cap based on Breeze bike-share’s initial fleet size of 500 bikes. Bird was recently joined by Lime in offering scooter service in Santa Monica.

Bird, Lime and any other operator would pay a $20,000 fee annually, plus $130 per device annually. The proposed regulations spell out requirements for data reporting, insurance, education, etc. Bird and Lime are currently operate e-devices using a business license and conditional vending permit. The proposal would end these vending permits in September.

The proposed regulations were announced last Wednesday when the city announced the agenda for tonight’s meeting. Since then, the lines have been stark between scooter fans and scooter skeptics. The city staff has claimed that the regulations are a needed safety component. City Manager Rick Cole even responded on twitter to what I intended as a light-hearted headline on yesterday’s story about the car that was hanging out of a parking garage with a less than amused response.

If you want to make far-fetched comparisons, no one was hurt here, while two electric scooter users collided on Ocean Front Walk this weekend, both were knocked unconscious and transported to the hospital with what the Fire department called “moderate” injuries. https://t.co/XLhEwltvj0

From September through today, city staff report that e-scooters have experienced no fatalities, and approximately 16 “accidents” with three that resulted in “serious head trauma” in addition to the crash and two injuries that Cole mentioned in the tweet above.

But Bird sees the regulations as too onerous and is planning a rally before tonight’s meeting (5:00 p.m. at City Hall) to “Rally for Sustainable Transportation.” At least three City Council members will be attending the rally, including Gleam Davis, Terry O’Day, and Tony Vazquez. There are seven members of the City Council, so if one assumes that these three Councilmembers vote against the regulations, the city would need all of the remaining members to vote for the regulations for them to be approved.

Dockless electric scooters also earned the support of the Los Angeles Times, which after running a flurry of anti-e-scooter opinion pieces finally weighed in with their official word with, “Scooters Aren’t a Scourge, They’re a Solution.”

Tonight’s rally is intended to show support for Bird and electric scooters, but it’s not certain that it can change hearts by itself. Last February, Bird began allowing riders “send an email of support” to the City Council when they picked up their scooters with just the click of a button. The flood of emails to city hall did little to change the hearts of staff or the Council.

Bird sees the regulations as a threat for good reason.

Bird is currently operating well over 1,000 scooters in Santa Monica, the exact number is hard to pin down as scooters regularly cross over from the Los Angeles communities of Venice, Mar Vista and West L.A. These crossings also make the city’s cap nearly impossible to enforce. Hypothetically, if a person hops on a Bird scooter after dinner in Abbot Kinney and rides into Santa Monica, where Bird already has 500 scooters in operation, what happens? Does Bird get fined? Does the scooter shut down? The scooters may have some smart technology, but they have yet to recognize political boundaries.

Santa Monica Next will report back tomorrow with the results of tonight’s meeting.