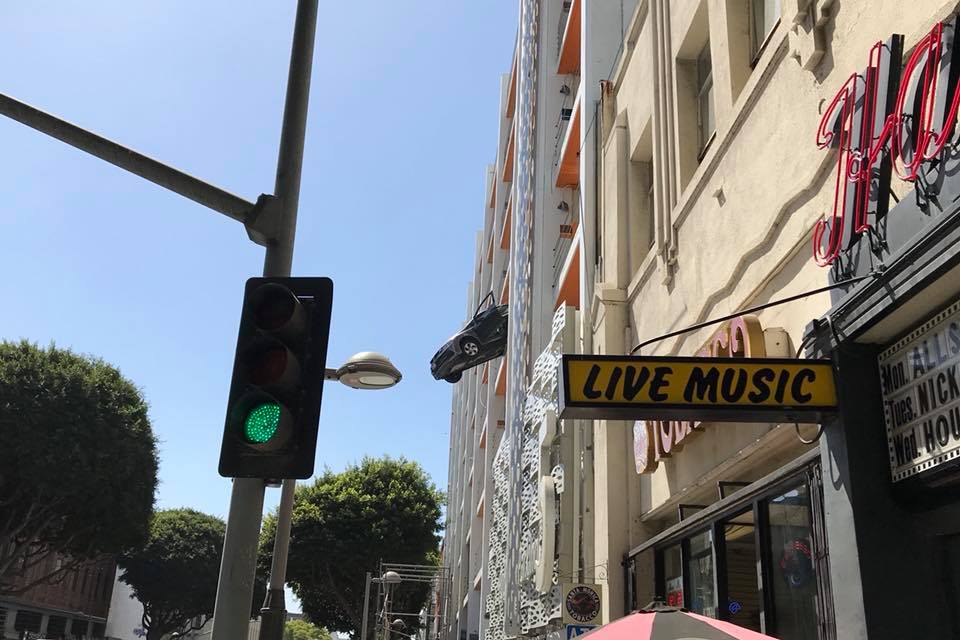 Release via SMFD– On Monday at 10:30 a.m. Santa Monica Firefighters responded to City Parking Structure # 5 located at 1440 4th Street for a report of a vehicle hanging off the side of the 5th floor parking level.

Fire resources arrived within 5 minutes 47 seconds and found a late model Honda Civic that had driven off of the parking platform and was precariously hanging over the edge, only held in place by steel barrier cables.

Prior to first responders arriving, a bystander who witnessed the incident within the parking garage, sprang into action and pulled the driver from the vehicle. The driver, a female in her 60’s, reported that she inadvertently depressed the accelerator instead of the brake pedal while attempting to park.

Members of the Santa Monica Fire Department’s Urban Search & Rescue Team quickly secured the vehicle to prevent it from falling any further, while Santa Monica Police Officers evacuated the area and set up a safety perimeter. Firefighters requested 2 tow trucks from a local tow company to assist in executing their plan on safely pulling the vehicle from the edge and back to safety.

At 11:45 a.m. the operation was complete and all hazards were mitigated. 25 Firefighters responded with assistance from the Santa Monica Police Department and the Pacific Tow Company of Santa Monica. The driver was evaluated by Paramedics, fortunately there were no injuries reported to the driver, bystanders, or first responders.