Home Mobility Open Thread: Weigh in on the Great Scooter Debate of 2018 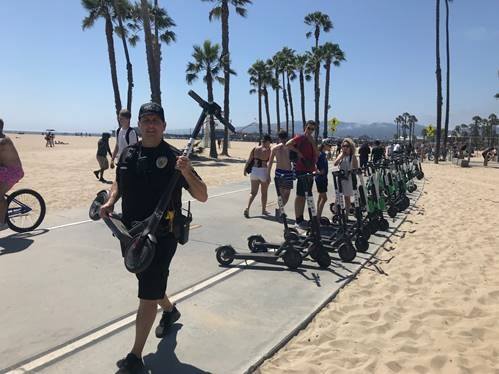 Anyone that thought the Great Scooter Debate of 2018 was over after the City Council approved a pilot program earlier this year was jolted back to a harsh reality after the SMPD conducted an aggressive “scooter crackdown” last Friday.

SMPD confiscated roughly 100 scooters that were in-use or parked on the Santa Monica Beach Bike Path. As the scooters are considered a motorized vehicle in existing state law, they would not be allowed to use the path that is reserved for non-motorized transportation. The SMPD posted pictures and scooter use guidelines on their Facebook Page while announcing the crackdown which they referred to as a “public information campaign.”

Reaction to the action was swift. Website “Systemic Failure” noted that, “the Santa Monica PD has eliminated all crime and car crashes in their city — because what could possibly be less important than this.”

True, but the difference is most scooter riders are novices. It's like having all cars driven/bikes ridden by people doing it for the first time. It will get better, but right now it is pretty frightening — for them as well as others. https://t.co/JHeoei0Prw

Is the city over-reacting to the Great Scooter Invasion of 2018, or is it just struggling to find a balance while new technologies are trying to fill a gap in local transportation needs? We welcome and encourage your thoughts in the comments section.