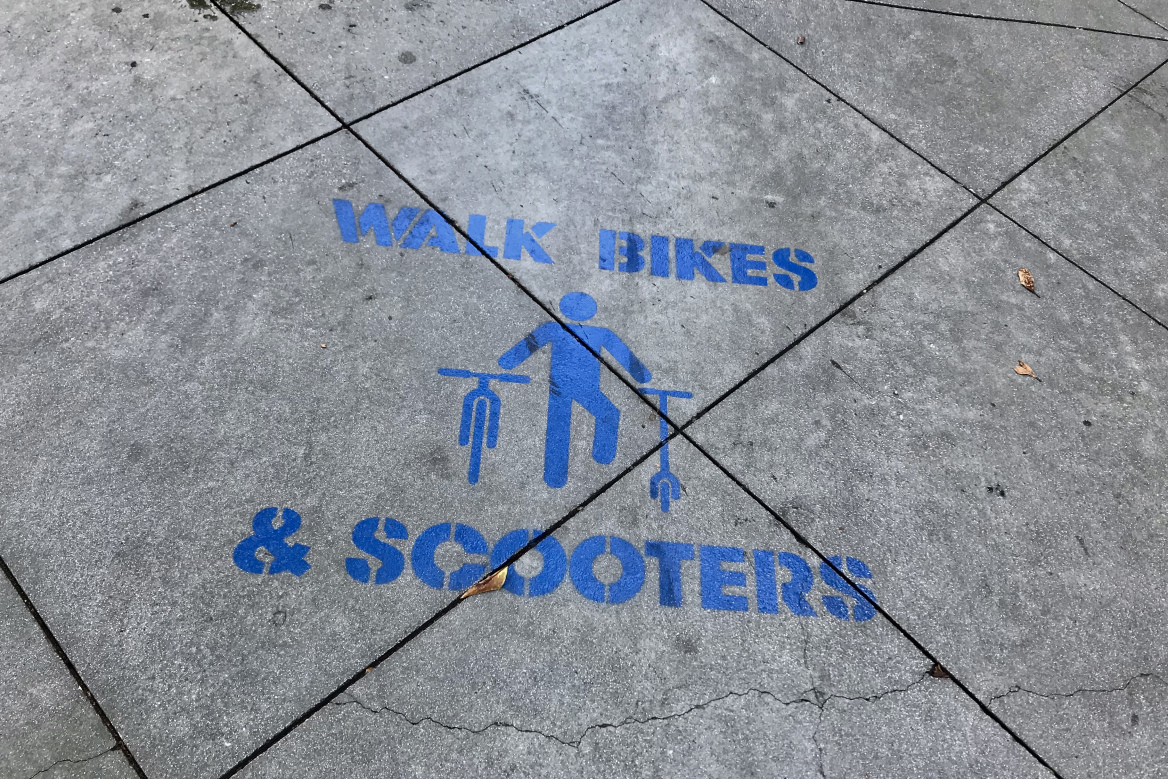 (This post first appeared in The Healthy City Local.)

The silicon-enabled “new economy” is now disrupting transportation much as it previously disrupted retail, journalism, entertainment, publishing, etc. Starting with ride-sharing, and now with dockless scooters and e-bikes, infusions of new money and new ideas are colliding with a transportation system that had been locked for decades into a 20th century model that massively privileged drivers of privately-owned automobiles. While scraps of investment were thrown to “mass” transit, culturally the norms were that for car drivers, the ideal was maximal personal freedom and choice, but if you travelled by other means, nearly all aspects of the trip would be constrained.

This even applied to walking: the demands of drivers restricted walkers to skinny sidewalks and caused the criminalizing of walking under the invented concept of “jaywalking.”

Now much of this has been turned on its head, in large part because freedom to drive became a monster that consumed itself, in the form of traffic congestion. When people finally realized that infinitely increasing road capacity and space dedicated to parking was not only impossible but also counter-productive for reducing congestion, governments started to implement policies that allowed for reducing driver freedom and increasing the cost of driving, particularly in cities.

A pivotal moment was London’s implementation of congestion pricing in 2003. While only a few cities have followed with their own direct congestion-pricing programs, many, including Santa Monica, have significantly increased the cost of parking in downtown areas, which is another form of congestion pricing. Cities have expanded car-free zones, narrowed streets, and expanded facilities for pedestrians and alternatives to cars, such as wider sidewalks and bike lanes. Car manufacturers are planning for the decline of individual car ownership.

Meanwhile, in cities and regions like L.A., the public has voted to tax themselves to invest in transit. Yet for a long time many of the controversies about transit involved how to please car-drivers. It was controversial when the City decided to provide little parking at Santa Monica Expo stations. Now, with Uber and Lyft, as well as public bike-sharing programs, and with significant reductions in the use of the City’s existing parking garages, and given at the same time the success of Expo, those debates over parking seem like what they were: from another century.

And now scooters. Like everyone else, I was confused last September when Birds first appeared lined up on downtown Santa Monica sidewalks. Then I saw people riding them. And like everyone who wasn’t riding them, I got indignant, especially when I saw scooters being ridden on sidewalks.

But I’ve come around. I mean, talk about another mode in “mixed-modal.” For years transit planners have been worrying about the “last mile” problem, and sure enough someone comes along with an option that works for many transit users (not all, of course—nothing works for all) and which requires zero public capital investment. Wow. We should be trying everything we can to make this work.

Government planners are naturally uncomfortable working with for-profit partners, in a context, transit, that traditionally requires subsidy. But it’s not the first time public/private partnerships have built transportation systems. The transcontinental railroads were a public/private partnership, and since World War II America has built a tremendous continent-wide transport system consisting of airlines, airports, interstate highways, and rental cars. (But open only to those with credit cards.)

As for the criticisms of scooters and scooter riders, one need not wage generational war to realize that scooter use needs to be subject to rules. But non-riders should calm down. Frankly, while as a daily cyclist my hackles were at first raised by having to share “my” bike lanes, my attitude started to change when I realized that the complaints about scooter riders were often the same complaints made against us cyclists.

Two things to remember are (i) that these scooters are a new thing and if Bird had asked to be regulated ahead of time, no one in City Hall would have known what to do with them, and (ii) that with education and outreach, people can change behaviors, particularly if the admonitions to change come from the peer group.

And if the City is so concerned about helmets, how come it doesn’t make Breeze bike users wear them?

I only have a few things to say about the competition over which two scooter companies get to participate in the City’s pilot program. To begin with, the City gets points for having the program, rather than reacting to scooters by banning them or making arbitrary limits on them as other cities have done. You can’t regulate something you don’t know about.

As for the competition among the companies, I’m less sure that the City is taking the right approach. (By way of disclosure, I’m friends with three locals who work for Bird.) As has been reported, the City asked interested companies to submit applications, answering a series of questions. A staff committee then graded the applications and made recommendations based on those grades. Unfortunately, it seems that the committee limited its review to the applications, without, it seems, considering the “real world.” (The final decision will now be made by the Director of Planning, David Martin, who apparently is not limited to the applications or bound by the recommendations.)

The result was that the committee recommended two companies for the pilot, neither of which has operated a scooter business previously. One company is owned by Uber, and the other by Lyft.

Uber happens to be one of the most reviled companies in the real world, a company that seems to treat everyone badly. I can’t see why Santa Monica would want to enter into a pilot program with an Uber company.

I’m a fan and user of Lyft’s car-sharing service, and the company is in business already with the Big Blue Bus on a program to give last-mile access to low-income transit users. As I said, however, Lyft has never operated a scooter program before and it shows in Lyft’s application.

The City committee graded Bird’s application low, and after reading it I’m not surprised. It’s shorter and sparser than the Lyft application. Their motto seemed to be, “just the facts, ma’am.”

I also detect, however, in the committee’s shunning of Bird and Lime, the two existing scooter companies, a tendency in Santa Monica to ignore realities in the service of an ideal of fairness. This tendency does not in fact guarantee fairness, and along the way it tends to screw up results.

Ignoring the realities of Bird and Lime reminds me of how, when evaluating proposals to redevelop the Bergamot Station art center, the City ignored Wayne Blank, the master lessee of the galleries for decades, and truly the inventor of the art scene there. Blank was also the owner of important adjacent properties. When the process of determining the development team the City would work with began, it was hard for me to envision the City choosing any team that didn’t include Blank.

But that’s what the City did, and the whole process crashed and burned. The City has had to start all over at Bergamot. That’s what happens when you ignore reality.