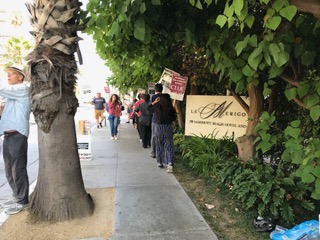 A former employee of the JW Marriott Le Merigot Hotel in Santa Monica described a workplace in which sexual harassment was tolerated during a July 16 hearing of the California Assembly Select Committee on Women in the Workplace.

Dennia Palmer, a former employee at the Le Merigot, told the Assembly Committee that supervisors and coworkers made lewd comments toward her, and that she witnessed disparagement of a coworker who came forward with allegations of unwanted touching of a sexual nature by a former hotel general manager. When the female hotel employee made a formal complaint, management’s response was to undermine the complainant’s credibility, rather than address the complaint.

“At the Le Merigot, it was normal to joke about sexual harassment,” said Palmer. “When one of my male coworkers began to make unwanted advances toward me, I didn’t feel like a manager who jokes about women would take it seriously, and I feared the potential consequences of speaking out.”

Palmer spoke on a panel composed of workers from various low wage industries who spoke about their experiences of sexual harassment on the job. They were followed by a panel of leaders from the women’s movement and the labor movement, including Maria Elena Durazo, SAG-AFTRA President Gabrielle Carteris, and Ms.Magazine Executive Editor Katharine Spillar.

A working group of Santa Monica residents has been meeting since February to discuss how the city can protect women in the hospitality industry.

Both Chicago and Seattle now require hotels to give employees who work alone in rooms a wireless “panic button” that they can use to call for help. A 2016 survey by UNITE HERE Local 1, “Hands Off Pants On”, found that 58% of hotel workers in Chicago had experienced unwanted behavior from guests, including displaying genitals, groping, or sexual coercion.

The vulnerability of hotel housekeepers to sexual assault was dramatically illustrated in 2011 when Dominique Strauss-Kahn, then the Chief of the International Monetary Fund, was accused of attempted rape, sex abuse, forcible touching, and unlawful imprisonment by a housekeeper at the Sofitel Hotel in Manhattan. Although the criminal charges were eventually dropped, Strauss-Kahn entered into a civil settlement agreement with the housekeeper, an immigrant from Guinea.

Author Barbara Ehrenreich, who documented the experiences of women who work in low-wage industries in her book Nickeled and Dimed, tweeted “Our current sex harassment discussion is woefully class-skewed. Too much about actresses and not enough about hotel housekeepers.”

Juana Melara and Sandra Pezqueda, housekeepers at hotels in the Los Angeles area, were among those honored by TIME Magazine in its annual “Persons of the Year” feature, who in December, 2017 were “The Silence Breakers”: people who courageously spoke up to reveal sexual harassment in the workplace.

The Assembly Select Committee on Women in the Workplace examines issues such as equal pay, child care and transportation as barriers to work, scheduling practices, health and safety in jobs traditionally held by women, and sexual harassment in the workplace.

Community members are encouraged to join hotel workers who picket in front of the Le Merigot on Ocean Avenue weekly, and to ask members of the Santa Monica City Council to join with other cities in protecting hospitality workers from sexual harassment.