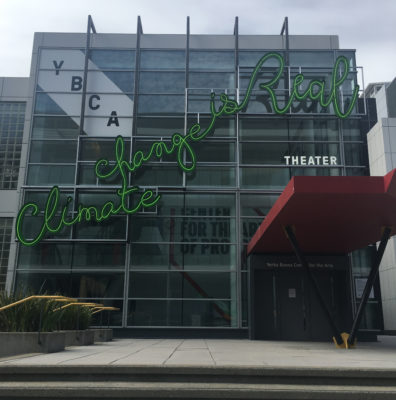 “I didn’t expect to see it in my lifetime,” said former California Senator Fran Pavley, author of the Global Warming Solutions Act. “When we wrote our report in 2001 we didn’t expect it to happen so fast.”

She was talking about fires, flooding, average temperature increase, and the storm currently threatening the East Coast–and the rapidly increasing frequency and intensity of all of the above. The urgency of addressing climate change has brought what seemed like a theoretical discussion into the realm of the here and now.

That is supposed to be the focus of the Global Climate Action Summit kicking off this morning in San Francisco. The event has actually been going all week, with speeches, forums, panels, and of course off-schedule protests throughout the Bay Area and beyond.

Pavley was speaking at a related event, a lunchtime talk hosted by CALmatters on the question of whether it is right and appropriate for California to be the model for climate change policy. It was a good question, but the panel instead discussing the pros and cons of the ways California policy makers have tried to tackle climate change.

Michael Shaw, representing the California Manufacturers & Technology Association, had been claiming that California’s policies are forcing manufacturers to move out of state because the costs of doing business here are too high. California being at the vanguard of climate policy puts industry at risk, he said. He also argued that anything California does would not “make a dent” in global emissions.

Pavley spoke of the difficulties of getting policy, any policy, passed in the face of resistance from industry. She spoke of early work on A.B. 32 and rules on renewable energy goals for the state. “We couldn’t get a bill out of committee,” she said, in large part because industry resisted. But in the end, new rules were passed, cap-and-trade was created under A.B. 32, and industry found that they could work within the new structure, and even benefit from the efficiencies they were forced to make. Now, industry supports cap-and-trade because, said Shaw, “it provides some certainty for businesses.”

It was becoming a bit of a back-and-forth. Pavley: industry discovers these regulations aren’t killing them. Shaw: California’s energy costs are much higher than anywhere in the state. John White, representing the Center for Energy Efficiency and Renewable Technologies and also on the panel: There is perceived risk, but technology development is not set in stone, and the key is to create pathways to reducing carbon.

Then a question from the audience hit the reset button: When is California going to recognize that market signals—cap-and-trade, carbon pricing—are not enough? When will California create real regulations to bring the change we know is needed?

White answered by talking about the disconnect between what is known by science and policymakers and what is known by the public. Things–fires, droughts, temperatures–have gotten much worse sooner than anyone expected. The fact that CalFire has run out of fire-fighting resources before the fire season has even officially started is a shocker, he said. At the same time, public understanding of the urgency of problems is lacking. He used the gas tax as an example of a policy that members of the public might oppose for personal reasons but without understanding the larger ramifications of their choices. “The gas tax repeal could still pass,” he said.

“As much as we’ve done,” he said, “we’re still far short of what we need to do. California is not so much a model as a laboratory,” he added, answering the question of the day. “Some things we’ve done have worked faster and better than expected, and some things have failed.”

Pavley said the state’s priorities now should be focusing on scaling up energy storage and “attacking” super pollutants that are the biggest sources of carbon emissions and health problems and whose decrease could have the biggest impact, and helping low-income communities solve their housing, employment, transportation, and health issues.

“Everyone needs to engage,” she said, “especially at the local level, and especially with their city councils. And,” she added, “we need to be making lifestyle changes.”

Other events affiliated with the conference touched on this theme, and on the need for California policy makers and the public to stop relying on technology to save us from having to make shifts in the way we live.

“Technology will only get us sixty percent of the way there,” said Lynn Peterson, president of the Metro Council in Portland, Oregon, at another affiliated event, this one hosted by UC Davis. “We need to reduce VMT [vehicle miles traveled],” she said. “We need to build housing where housing is needed,” near jobs and services. In addition, we need to better understand travel corridors, both between regions and states as well as locally, especially the arterial systems cities rely on “to move people, not just cars,” she said. “If we don’t start digging into that we won’t get where we need to go” in terms of emission reductions.

The CALmatters event drew a crowd that included a number of California legislators in town for the main event, including Senators Scott Wiener (D-San Francisco), Hannah Beth Jackson (D-Santa Barbara), Robert Hertzberg (D-Los Angeles), Assemblymembers Ricardo Lara (D-Bell Gardens), Timothy Grayson (D-Concord), and Jim Wood (D-Santa Rosa). They are among the thousands of participants pouring into San Francisco’s giant Moscone Center this morning to listen, discuss, argue, share information, be inspired, and have the heck scared out of them. And to protest. Outside the convention center, protestors gathered to remind Governor Brown, co-chair of the event, that the cleanest environmental policy means leaving oil in the ground.

Senator Hanna Beth Jackson, at the PPIC event, called out Michael Shaw for his claims that industry is doing what it can to help California meet climate goals. “For the private sector, the bottom line is money,” she said. “This whole thing, though, is about extinction. Business is only looking at the last quarter’s profit. How do we get business to take some responsibility?”

“The market is not interested in saving the planet,” she said. “I would appreciate hearing some suggestions for how to solve this so we don’t have to keep regulating you.”

Pavley spoke up: “I have a humorous response,” she said. “How about putting more women on the boards of directors?”

Over the next two days, there will be plenty of grandstanding, announcements of international collaborations and commitments, slickly produced videos, celebrity appearances, claims about sustainability, and wonky charts showing how fast and how slow state policy is moving towards saving the planet. And there will be protests.

Streetsblog will be looking for the action in the Global Climate Action Summit.