Home Politics Election 2018 Vote No on Prop 6: The Campaign Is an Incoherent and Childish... 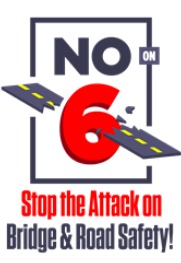 If you follow national politics, you doubtless know the name “Devin Nunes,” even if you are not a resident of his Central Valley Congressional District. Nunes, the Congressional Consigliere for the Donald Trump legal defense team (we’re too polite to call him a Trump Stooge as the Sacramento Bee does), is in trouble in his Congressional race. Sadly for Nunes, his devotionals to the president are not going to carry him to victory, so the Congressman has had to look for some other issue to lift his campaign.

And he thinks he’s found it. Unable to run on his own record, Nunes is instead running against the 2017 increase by the California legislature of the state’s gas taxes and vehicle fees. The increases will raise $52 billion over a decade, all of which is earmarked for transportation improvements–mostly fixes to the state’s crumbling infrastructure.

And he’s not being subtle about it. The Los Angeles Times reports that Nunes is donating campaign funds to the gas tax repeal measure, Proposition 6, which like Nunes will be on this fall’s ballot. Nunes’ first ad on Facebook, which he is spending his campaign dollars to promote, is focused on the state gas tax and why it is imperative that we repeal it.

And Nunes isn’t alone among national Republican leaders hoping to ride an anti-gas-tax wave back to keeping control of Congress. Kevin McCarthy, the Bakersfield Republican who hopes to replace outgoing House Speaker Paul Ryan, has also kicked in funds (from his campaign, not his own money) to help support Prop 6. So have Ryan (R-WI) and Republican House Leader Steve Scalise (R-La).

While Nunes and out-of-state Republican elites are counting on a disinformation campaign to confuse voters and excite conservative voters who might otherwise stay home, there are two questions one can ask to discern whether or not supporting Proposition 6 is a good idea.

The first question: “Do you believe that investing in our infrastructure is a core function of government?”

If your answer to this is “yes” then you should probably vote “no” on Proposition 6. The condition of our state’s roads and highways is not good, and our bridges are even worse off than the surface streets. Because of a long, slow decline in the amount of revenue gas taxes produce, until they were increased last year the state had little money for maintaining, let alone repairing, these roads–and all the “belt tightening” in the world won’t put California’s infrastructure back into a state of good repair. New revenue has been sorely needed.

If your answer to the question above is “no,” then you still should consider voting against Proposition 6. Currently, the opponents of the increased gas tax and vehicle registration fee have not put forward a realistic plan on how the roads and bridges could be fixed without them. Even if you believe in the power of Capitalism and the Invisible Hand of the Free Market to fix the roads and bridges, the reality is they are falling apart now, and there is no movement towards finding a free market solution to the problem.

But there is a second question one should ask, the answer to which could override the first question.

Do you believe in Santa Claus?

If you do, then by all means vote for Prop. 6 and just put “funding for modern infrastructure” on your list for Santa this winter. Problem solved.

But if your answer is no, then it’s time to acknowledge that there’s no one coming to the rescue, and instead we’ll have to rely on basic economics to make this work. A vote for Prop. 6 from anyone who knows California’s roads and bridges need fixing is basically the same as asking for something for nothing.

It’s up to us not to fall for a shallow political ploy.

Vote no on Proposition 6.