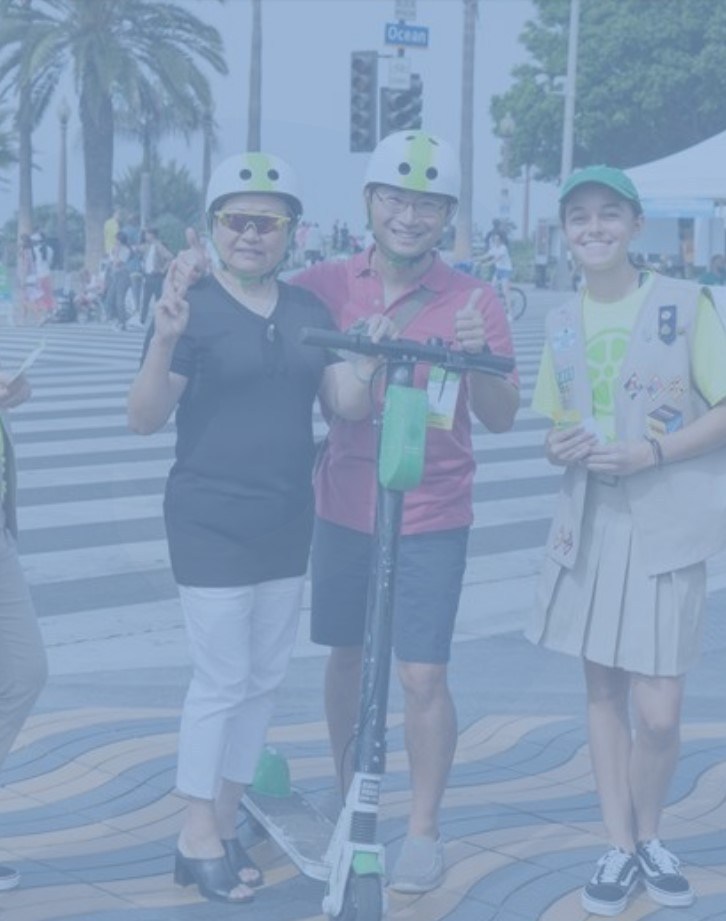 In September 2017, the first app-based shared electronic scooters appeared in Santa Monica. The initial Bird e-scooters were followed by several other companies. Today, e-scooters are ubiquitous throughout well-off touristy westside areas, including Santa Monica and nearby L.A. City neighborhoods of Venice and Westwood.

E-scooter popularity caught Santa Monica by surprise. Early staff recommendations to limit e-scooters were overruled by a city council more receptive to the new micro-mobility. Both staff and electeds agreed on a need to regulate shared e-scooters and e-bikes – including fees, data-sharing, and managing parking.

Santa Monica selected Bird, Jump, Lime, and Lyft to operate an initial fleet of 2,500 devices – 2,000 electric scooters and 500 electric bikes. Under the city’s dynamic fleet caps this number has risen to 3,250 devices in September 2019.

During the initial pilot, Santa Monica pioneered scooter parking “drop zones” both on sidewalks and, apparently first in the nation, in streets. To date, Santa Monica has installed 107 e-scooter/e-bike drop zones in the 8.5-square-mile city.

Earlier this month, Santa Monica issued its Shared Mobility Pilot Program Summary Report evaluating the results of the initial year of the program. The 71-page report recaps how e-scooters/e-bikes have performed, and makes recommendations for the future of the program.

Santa Monica saw 2,673,819 e-scooter/e-bike rides from October 2018 through September 2019. Trips increased fairly quickly at the start of the pilot, and have  somewhat leveled off at roughly 3,000 trips per month. Average trip time was 14 minutes and trip length was 1.3 miles.

Santa Monica’s municipal bike-share Breeze has experienced a significant drop-off since peaking the summer before e-scooters were introduced. Summer peaks of nearly 40,000 rides per month in 2016 and 2017 have declined to less than 10,000 per month in 2019.

Trip origins and destinations were concentrated along the coast, especially in the central downtown/pier area served by the Metro Expo Line.

According to user surveys, nearly half of riders (47%) reported an income above $75,000. Though Santa Monica required operators to create reduced fare programs, utilization of these was low.

There were 122 total reported collisions involving shared mobility devices from January 2017 to September 2019. Of these collisions:

Santa Monica will use the initial pilot results to inform (per a city press release) “a second pilot program with intensified regulations that facilitates greater customer reliability and affordability, and more effectively achieves safety and public outcomes.” The city is looking to improve rider behavior, parking, and to better reach low income populations. Proposed new regulations are expected in early 2020.