This post, by Frank Gruber and Juan Matute, first appeared on The Healthy City Local.

The City of Santa Monica is experiencing a financial crisis unprecedented in living memory. If left as is, planned expenditures are likely to exceed revenues by $200 million over the next two years. To close the gap between now and the end of the fiscal year (June 30), the City has already committed to spending its operating reserves and the City Council has approved hundreds of layoffs.

But Santa Monica is not broke. It has cash, securities, and other assets worth billions of dollars. The City has the second-best ratio of assets to debt of its peer cities in Los Angeles County (justifying its triple-A bond rating). Many of these assets are, of course, essential for the City’s purposes—think City Hall, or parks, or the City Yards—and can neither be disposed of nor borrowed against. The City has, however, about three quarters of a billion dollars in relatively liquid assets, mostly government bonds. (The details on the City’s assets are set forth in the City’s Comprehensive Annual Financial Report (CAFR) for the year ending June 30, 2019, which was delivered to the City Council last December 16 and which is available on the City’s website. For ready reference, the summary of all accounts, the “Statement of Net Position,” is reproduced below.)

The City amassed its liquid assets over the past two decades of (nearly continuous) prosperity, by nearly always spending less each year than it took in as revenues. These assets are above and beyond the City’s explicitly denominated operating reserves (which are tiny in comparison). The City is wealthy.

One should ask: for what purposes does a City amass wealth? We can think of only two: for either (i), investing in capital improvements, something not relevant to this discussion, or (ii) the proverbial rainy day. With respect to the proverbial rainy day, what we are experiencing now, with Covid-19, is a Biblical deluge. There is no reason for the City not to tap these assets, prudently, to get the City through the coronavirus crisis.

Although the current crisis is extreme and dramatic, it’s not the first time the City has faced economic difficulties. When Douglas Aircraft left Santa Monica in the late ’60s, Santa Monica entered two decades of economic decline. Businesses, visitors, and residents were no longer attracted to Santa Monica as the public realm was increasingly blighted and unsafe. The City’s decline seemed to be epitomized when our famous Pier was badly damaged by storms in the winter of 1982-83.

Yet the City picked itself up. Enlightened leadership and an engaged community not only invested to rebuild the Pier, but the City turned the dead zone of the old Third Street Mall into the bustling Third Street Promenade. The Northridge Earthquake clobbered downtown Santa Monica in 1994, but the City responded proactively and emerged stronger not only economically, but also socially, as our city supported sustainability, equity, education, housing, and social services at higher levels than did other California cities.

Now the public health and economic crises threaten our local economy. City Council has voted to reduce the size of local government by about 25 percent, a major disinvestment in services that will lead to a decline in what makes Santa Monica a good place to live, work and visit. In our opinion, although budget cutting is needed, the drastic cuts the council approved threaten to turn Santa Monica into a place that would not be in a position for an economic recovery when the pandemic ends—whenever that will be.

The City needs a local bailout. The City cannot avoid the downward spiral of disinvestment without expenses exceeding the City’s lowered revenue projections over the next two (and we expect three or four) years. The City will ruin itself if it reduces expenditures to the dramatically diminished level of revenues. Not only because of the degradation of services, but also because of the knowledge and expertise that will be lost when experienced employees are let go.

Of course, municipalities, unlike the federal government, cannot run deficits. But they can sell or otherwise turn to account the assets they own. Santa Monica needs to analyze its portfolio of assets and determine how much can be tapped over three or four years to maintain as much in the way of necessary services as possible.

No, this doesn’t mean we sell the Pier. The assets that the City could sell are government bonds it is holding or various real properties the City owns, some not even in Santa Monica, which serve no municipal purpose. This will require a close look at the City’s future obligations, both fixed and contingent. In our opinion the CAFR makes it clear that the City’s liquid assets far exceed its liabilities, especially considering the timing of when those liabilities are due.

To begin that analysis, we suggest that the City’s own analysis is far too conservative about what assets are available. Looking at the Statement of Net Position (copied below), you’ll see that while by the City’s accounting its net assets total $1.602 billion, of which $703 million is in the form of cash and investments (i.e., liquid, not operational assets), only $171.9 million is available, without restrictions, to be spent. (How the City reaches the $171.9 million is set forth on page xxii of the CAFR.) While $171.9 million is, itself, a lot of money, and spread out over three or four years could save many City services, it is an understatement of the City’s available funds.

It’s an understatement because to get to that number the City not only deducts from its assets $850 million of depreciation on fixed assets (an accounting requirement that does not reflect the value of the property being depreciated), but also deducts long-term liabilities that are never meant to be paid dollar-for-dollar from the City’s accumulated assets, but rather paid over time.

The biggest number in that regard is the often discussed $447.8 million net liability for pensions. This is a big number, but the pension obligation is payable over time to CalPERS according to an actuarially determined schedule, not all at once. Indeed, the City has been reducing its long-term pension liability by pre-paying the debt voluntarily from the City’s annual surplus cash. In accordance with the City’s current plan to deal with the crisis, those payments are being suspended for two years, but there’s nothing that requires the City to hold hundreds of millions of dollars of assets hostage because of its future obligations to CalPERS.

In upcoming articles, we will discuss other possibilities involving how the City can monetize assets that are not used for municipal purposes and possibly borrow against assets and receive support from the Federal Reserve to do so.

The Pier’s bridge and famous sign were built in 1938 by the federal Works Project Administration, a program of the New Deal. In 2020 Santa Monica can tap into its long-term assets to access the revenues necessary to avoid the vicious cycle of disinvestment and smooth the fiscal curve. Santa Monica can fund its own New Deal to help Santa Monica during a deep recession. 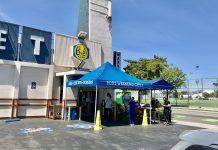