The Santa Monicans for Change PAC was described in an October 3 Santa Monica Lookout article as a “slow-growth organization”, but they are in fact a far-right organization with major overlap with the local pro-Trump landlords association ACTION Apartments, and which has received significant financial backing from LA-area developers.

This group was first formed in 2020 as Santa Monicans for Change 2020 in support of Christine Parra, Mario Fonda-Bonardi, Phil Brock and Oscar de la Torre for City Council (this is still the name they’re using on their 2022 campaign filings). The PAC has reemerged in 2022 in support of Lana Negrete and Armen Melkonians in their November 2022 city council election bids.

Santa Monicans for Change’s significant connections to far-right Republican politics begins with their treasurer, Kelly Lawler. Lawler is also the campaign treasurer for a large number of Republican candidates and PACs across the state. These include Steve Knight (the Congressman unseated by Katie Hill in the 2018 election), the PAC TEAPARTYEXPRESS.ORG, and the ACTION Apartment Association’s political arm, called ACT-PAC. 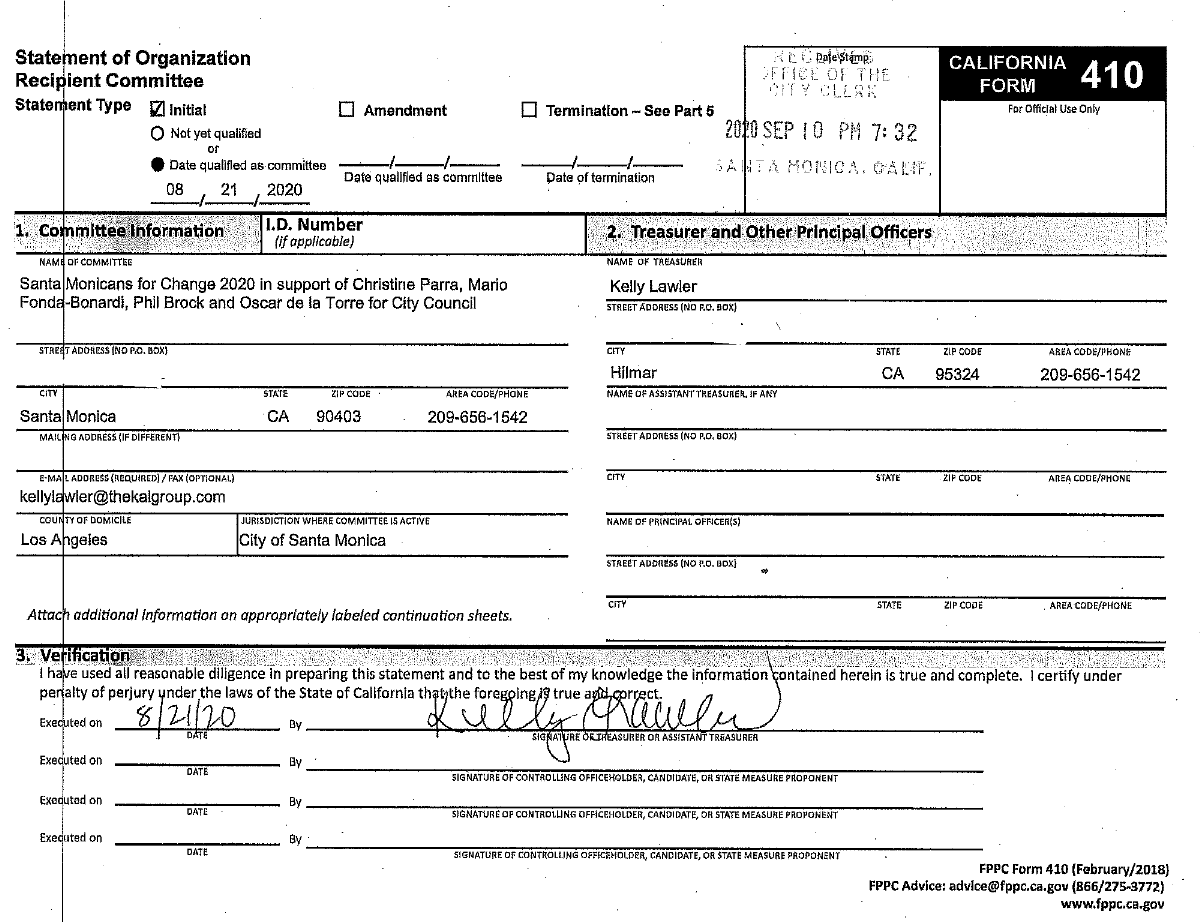 For a copy of the full report, click here.

In addition to sharing the same Republican treasurer, in 2020 the ACTION Apartments Association contributed over $5,000 to the Santa Monicans for Change PAC. And their far-right Republican bona fides extend well beyond sharing the same Republican treasurer. One of ACTION’s board members is Robert Kronovet, the former rent control commissioner who is vocally pro-Trump and who wrote into the Lookout in August decrying rent control as a communist plot to make renters dependent on the city.

Their “Links” page includes links (which they label as news links) to pages such as Infowars, which is run by rightwing conspiracy theorist Alex Jones and who recently was ordered to pay $965 million in damages for spreading lies about the Sandy Hook School shooting, and “Magagator”. In October 2020, one of the articles listed on their front page was a screed by Rosario Perry, full of pro-Trump views and Republican conspiracy theories on topics like COVID and “mail-in ballot harvesting”.

In addition to being pro-Trump, this group is also anti-renter; a document authored by Rosario Perry which is posted on their website is “10 Great Things to do as a Housing Provider”, the first of which is, “When helping tenants with reduced payments, or the like, remember no good deed goes unpunished.” As noted in the Lookout, when Perry died in April, he was motivated into organizing landlords in direct response to the passing of Santa Monica’s rent control law, which he opposed.

Also affiliated with this PAC is Housing Commissioner Dominic Gomez. As of April 25, 2019, Gomez was listed as the Vice President of ACTION. Gomez was briefly a city council candidate in 2020, before withdrawing and endorsing Councilmembers Phil Brock, Oscar de la Torre, and Christine Parra, as well as their failed slate member and sitting planning commissioner Mario Fonda-Bonardi. In Santa Monicans for Change’s campaign filings from 2020, Gomez is listed as the recipient of multiple large payments for services by the PAC, and was appointed to the Housing Commission with the support of Councilmembers Negrete, Brock, de la Torre and Parra in December 2021. Now, Gomez is listed as the principal officer of Santa Monicans for Change on their latest campaign filing. 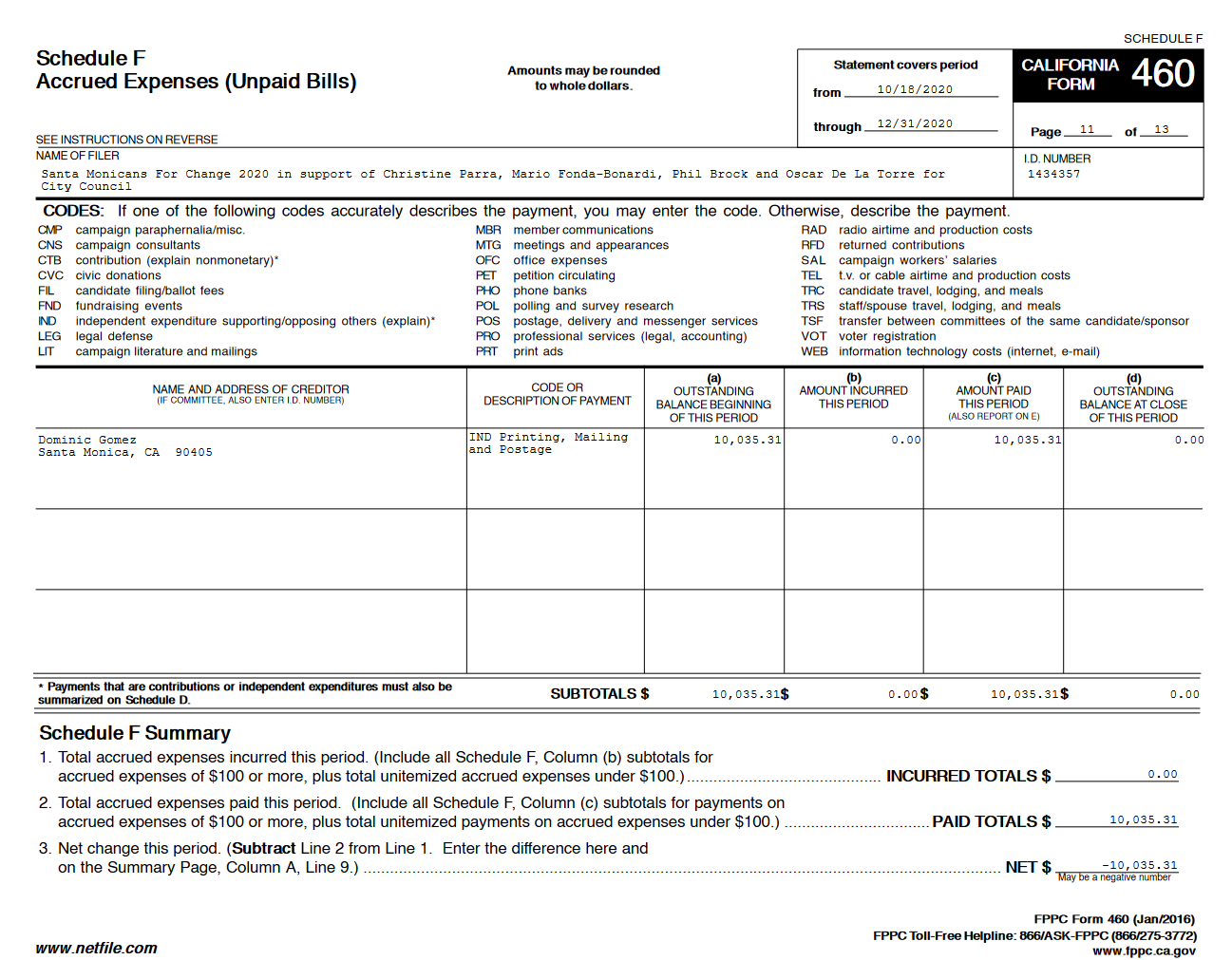 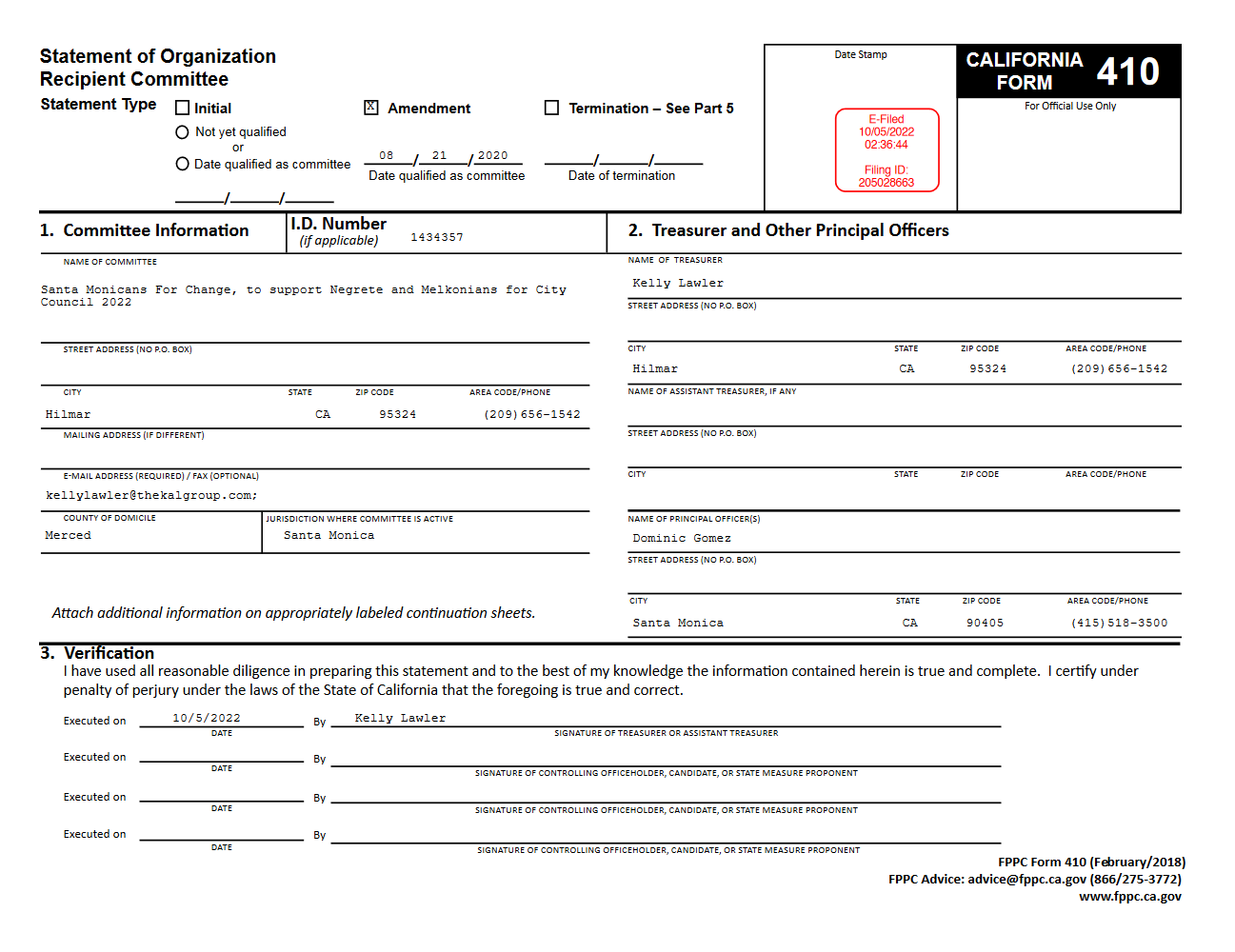 The PAC’s other funding sources further bely the notion that they’re just another slow-growth group. Take for example the September 2022 $10,000 donation to Santa Monicans for Change by New Commune DTLA LLC. New Commune is a development company run by developer Leo Pustilnikov. Readers may be familiar with Pustilnikov from his planned 2,300 unit builder’s remedy project in Redondo Beach, and his summer 2022 appointment to the Downtown Santa Monica board by Councilmembers Negrete, Brock, de la Torre, and Parra. Other real estate interests that have gotten involved in this election cycle include $4,200 in donations to Negrete from 11 individuals at JRK Property Holdings; these $4,200 represent the biggest source of donations to Negrete by employer. JRK owns the Oceana Hotel, which was recently before the city council seeking a conditional use permit to open its restaurant to the public. 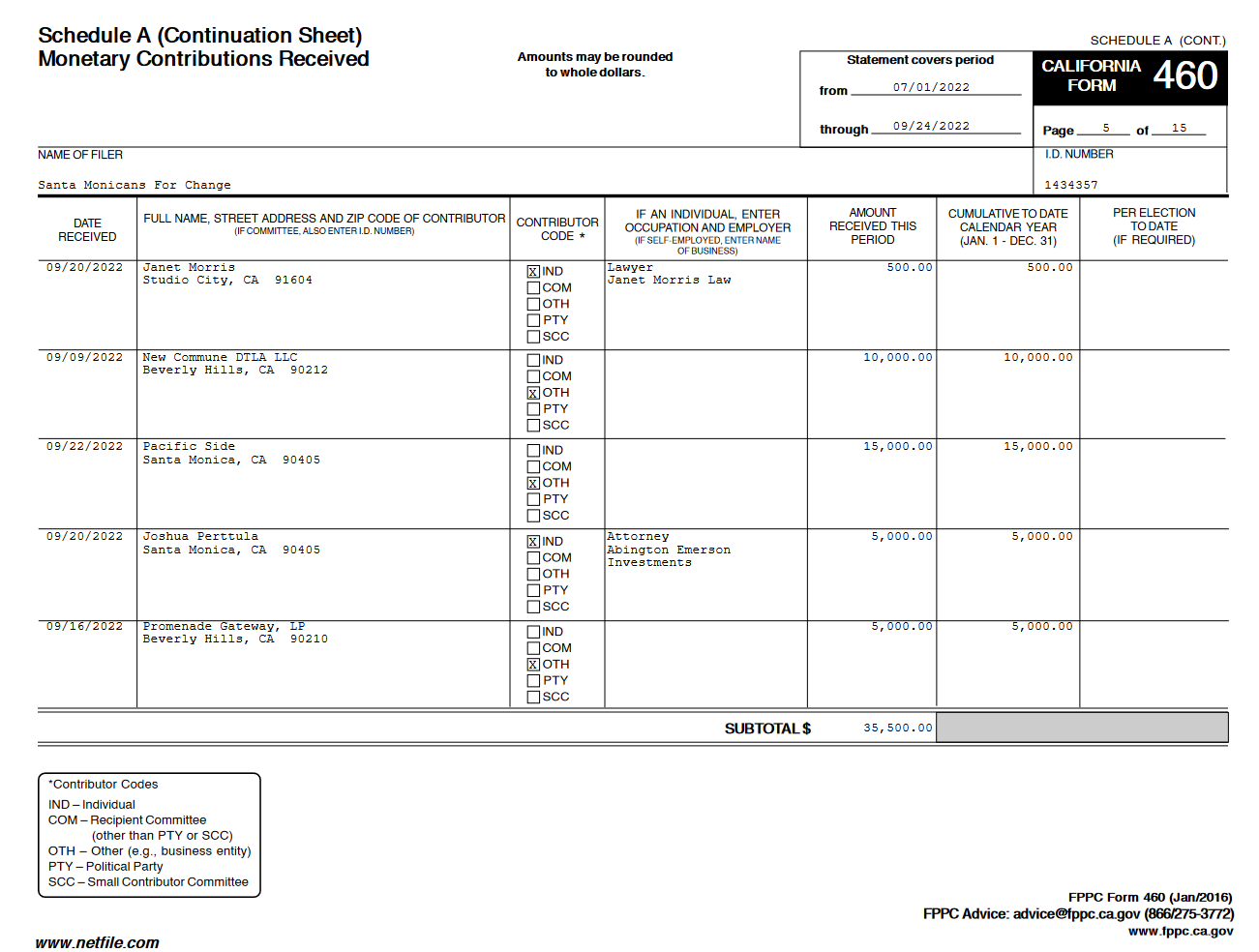 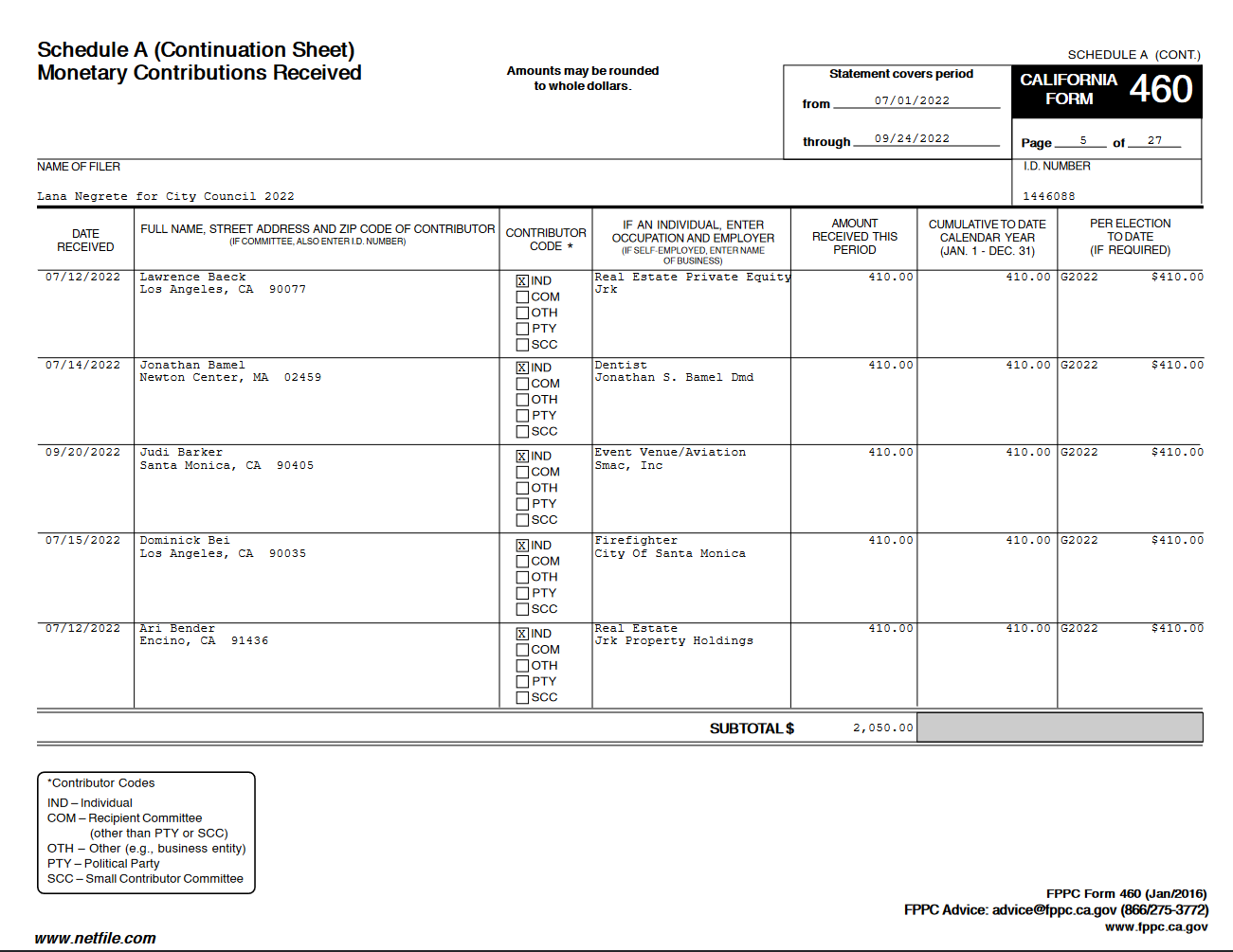 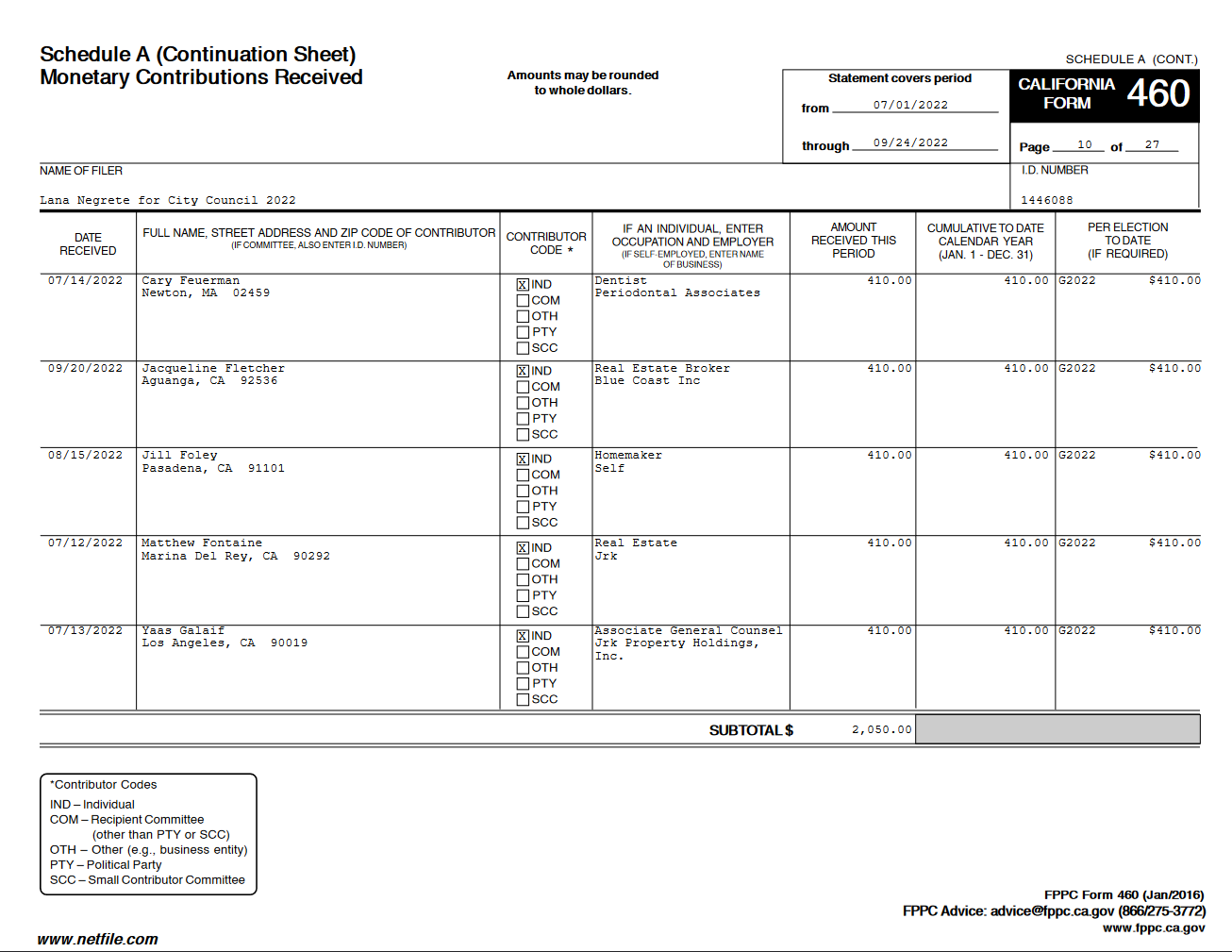 I hope I’m not the only Santa Monica resident deeply disturbed by this large-scale intrusion of deep-pocketed Republican and anti-renter interests into our city council election for the second election cycle in a row. We’re already seeing them stack our boards and commissions with allies such as Gomez and Pustilnikov. A supermajority of councilmembers backed by these interests would be devastating both for renters and rent control in particular, and our city as a whole.