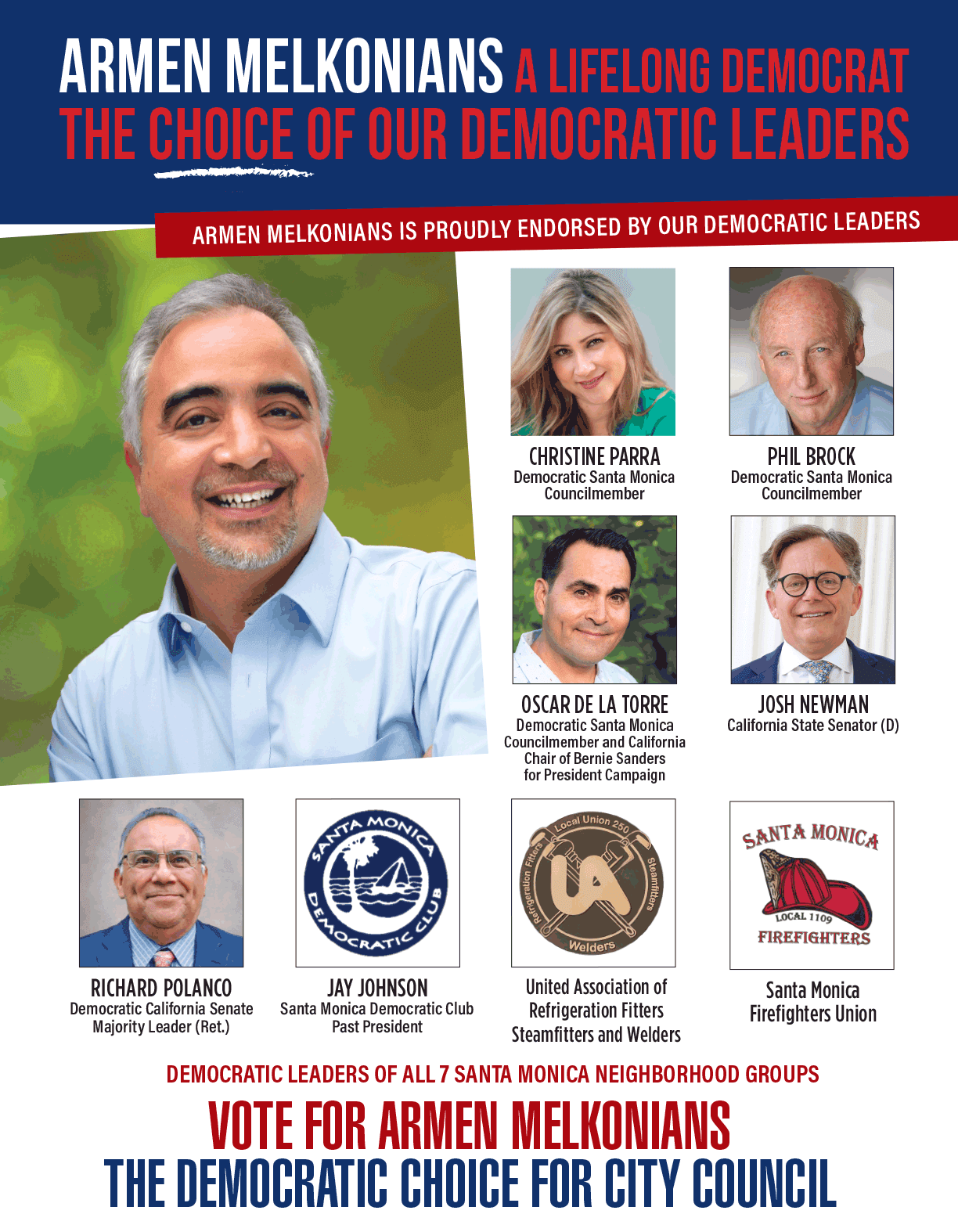 You’ve doubtlessly seen them. If not, you’ve certainly heard of them. Spoofing the name of the political party that’s been a major player in Santa Monica Politics for the better part of half a century, ‘Santa Monicans for Residents Rights’ (SMRR2 for the rest of this story) is muddying the waters of the endorsement game by pushing candidates and pushing against a ballot measure in direct contrast to the endorsements put out by Santa Monicans for Renters Rights (SMRR).

SMRR2 is pushing Armen Melkonians candidacy for the city council and against Measure GS, a tax increase on large properties taken at the point of sale. SMRR has endorsed Ellis Raskin, Caroline Torosis and Jesse Zwick. SMRR founder and president Denny Zane even played a major role in the drafting of Measure GS.

Zane is having none of this.

“It’s clear the intent is to deceive voters. It’s clear the intent is to convince voters that the brand they’ve associated with for forty years is endorsing people and positions that we are not,” said Zane in a phone interview with Next last week. Zane went on to say that SMRR is looking not just at defending their brand in the court of public opinion, but seeing if there is a legal remedy for the confusion.

Cris McLeod, a longtime Santa Monica resident and board member of the Pico Neighborhood Association is leading SMRR2 and is denying the association with the original, much better known, organization.

“The name is descriptive of our group — i.e. Santa Monica residents advocating for the rights of residents, a group far too often ignored by past city councils,” McLeod wrote to Next in response to a question about the groups’ name.

He went on to deny that use of the SMRR acronym is anything but an interesting coincidence. “…the initials of Santa Monicans for Residents’ Rights is “SMRR.”  No group can own a series of initials.  If another group named themselves Santa Maria for Radical Reform and used the same initials we have, we would not complain.”

While it may seem like just another eye-rolling event in the history of Santa Monica politics, SMRR2 has raised $55,000 as of the last reporting period from two large donations. $50,000 from “real estate investor” and Woodland Hills resident Sergey Vishinin (who’s name is misspelled on the filing form) and another $5,000 from real estate developer and lawyer Otto Hasselhoff. We’ve uploaded the most recently filed expenditure reports and donor reports from SMRR2.

Candidate Melkonians fancies himself anti-development. The SMRR2 mailers, funded by two people who financially benefit from ongoing development, claim that “only Armen Melkonians will stop the destruction of our city by greedy developers.”

SMRR2 is also opposing Measure GS, a proposed tax on large properties that would be paid when a property is sold for more than $8 million. Funds generated would go to support schools, affordable housing and homelessness prevention. One SMRR2 mailer mocks the proposal as “Mayor Sue’s Exorbitant tax” which must burn Zane on two fronts. The first is that Zane and SMRR helped author the measure. Secondly, it’s using the SMRR acronym to attack a proposal that is core to SMRR’s values.

SMRR2 isn’t just under fire from supporters of the original SMRR and those opposed to Melkonians. The Santa Monica Democratic Club is also angry that the group has used their logo without permission on at least one of the mailers. The logo was used in place of a headshot for a former Chair of the Democratic Club.

The Democratic Club responded in an email to its members.

“Last night, a shady anonymous PAC which supports one of the conservatives running for City Council sent out a deceptive email blast. The PAC is called “Santa Monica for Residents Rights,” obviously meant to confuse voters into thinking it came from our friends at Santa Monicans for Renters’ Rights (SMRR),” the email stated.

“Worse, the mailer includes the Santa Monica Democratic Club logo as if to imply that the Club has endorsed this conservative candidate, using the name of a former club president who was voted out of leadership by our members at an annual election.”

Further complicating matters, there was already a political organization named Santa Monicans for Residents’ Rights, which was founded by Zane in 2005. Note the apostrophe after the “s” that is not in SMRR2’s name.

“20 years ago we did that anticipating that someone might do this…pretend to be us,” Zane explains. He went on to challenge Melkonians to call on SMRR2 to stop using the SMRR acronym and similar name to confuse voters.

“What I don’t know is the involvement that the candidate might have with what’s going on, whether it’s direct or indirect. If it’s indirect, they should be telling them to stop. If it’s direct, well…that’s pretty obnoxious.”

McLeod and SMRR2 deny any coordination between their organization and Melkonians or his campaign.