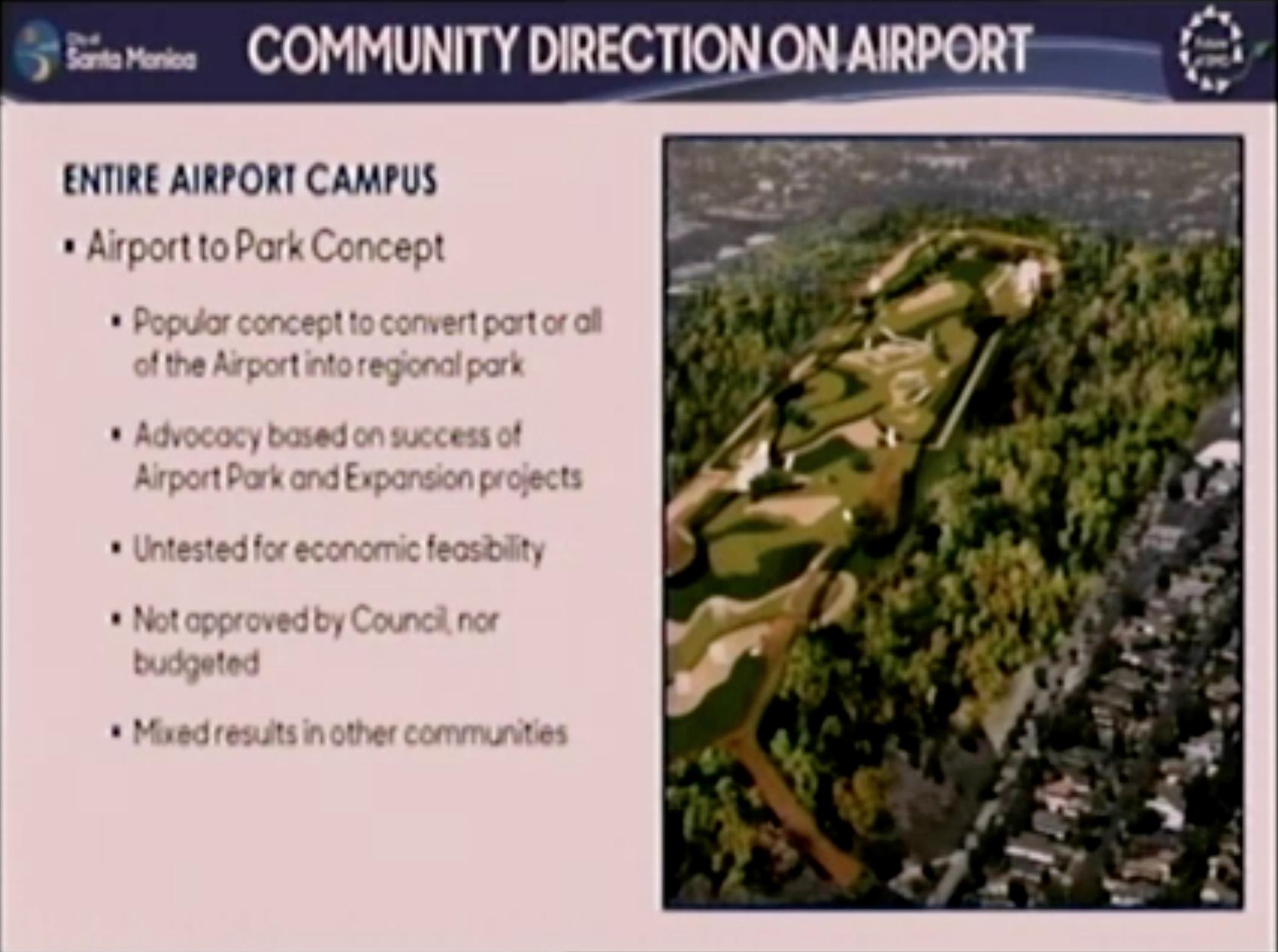 Over three and a half hours into another marathon City Council meeting, the Council heard a report from the city’s Department of Public Works on the future of the 227 acre Santa Monica Airport parcel if it is closed as planned on January 1, 2029. The report preceded a vote by the Council to adopt the goals and principles that will guide the outreach process for this legacy process. The Council unanimously adopted the document that included a commitment to equity, robust outreach and bringing in many community voices.

If that summary seems confusing, Councilmember Jesse Zwick offered a more succinct summary. The Council wasn’t deciding what they wanted to do on the parcel, but how the community is going to decide what to do with the parcel.

And while the idea of a future gigantic Airport Park dominated much of the conversation, it was clear that vision is decades away. Residents of Santa Monica and the Westside aren’t going to wake up on New Year’s Day 2029 to see a gigantic park in their backyard. Staff presented summaries of outreach plans for similar projects that took place throughout the years with planning processes that took somewhere between 16 and 22 years. Implementation of these plans can take even longer.

And at this moment in time, the city doesn’t even have a good estimate of how much the outreach plan will cost. $6 million was the most often heard guesstimate last night.

But for a project that would serve the city for generations, or even centuries, the city is determined to take its time and do it right. The one hour presentation and Council discussion touched on what are sure to be heavy debates in the coming years and possibly decades. And to further muddy the picture, aviation interests have not given up on possibly keeping the airport open. A “private email” was (perhaps accidentally) sent to hundreds of people asking them to write the City Council to not move forward with planning non-aviation uses for park by stoking anti-development fears and attacking popular local politicians including former Assemblymember Richard Bloom, State Senator Ben Allen and Congressmember Ted Lieu. Read portions of the letter here and here.

But the city seems determined to take advantage of a 2017 consent decree with the FAA and honor a 2014 vote by city residents to pursue closing the airport and convert it to non-aviation uses. The 2014 ballot measure (Measure LC) requires that any approved uses outside of open space, aviation and education be first approved by voters. This measure may complicate the political process; many of the funding options that have created similar parks throughout the world in recent years have included funds generated by new housing. But it also means that the city cannot move forward with any play without broad local approval.

And so having a process that reaches a broad section of the community isn’t just lofty rhetoric, but a requirement.

Councilmember Caroline Torosis noted that traditional planning processes often see the same people over-represented because they can appear at multiple events and have the time and resources to invest more than a working family. She also noted that Santa Monica is surrounded by communities that will be heavily impacted by whatever happens at what is currently the airport.

“When we talk about stakeholders, I don’t think we should be limited by the four corners of Santa Monica,” Torosis stated. “I hope that this is a place where people beyond the barriers of Santa Monica can feel welcome.”

Zwick followed Torosis by suggesting that panels of residents and stakeholders be compensated for their time to open up the process to people who couldn’t afford to take part otherwise. Staff seemed open to the idea, but given the city’s current financial straits would not commit to such a process.

There was also some discussion that maintaining some aviation at the current airport might be prudent. Councimember Lana Negrete mentioned helipads, which would allow the airport to continue to provide emergency and health services. Councilmember De La Torre mentioned electronic aircraft which would allow the area to remain a connection to its history and alleviate some of the environmental and air quality concerns with having an airport located in a residential area.

For links to the reports and the Council agenda, click here.